The Bombardier Challenger 850 is often dubbed as the ultimate business aircraft and thanks to the longest and widest cabin in its class, the aircraft offers the optimum combination of size, comfort and value. While high-quality wood has traditionally been the choice of material for top interior design companies that customize private jet cabins, a Hong Kong-based jet owner went to Canadian company named Flying Colours Corp. to create its first cabin interior entirely made from carbon fiber. Flying Colours specializes in customized business-aircraft interiors and was recently in news for its custom Sikorsky S-92 helicopter. The client worked with Flying Colours to specify the use of carbon fiber materials to give the cabin an innovative, modern look and the aircraft was delivered after 16 weeks of work. 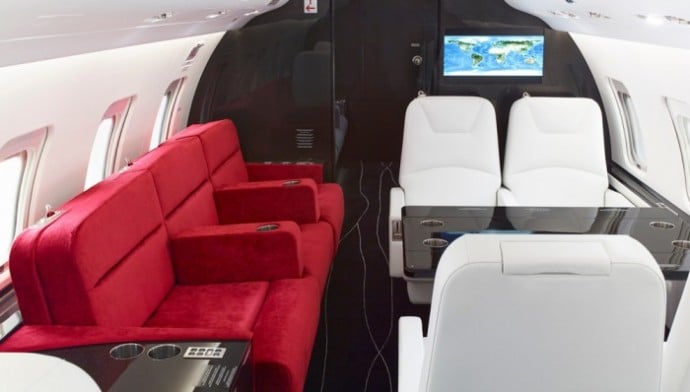 The design utilizes carbon-fiber surfaces in black and gray with ebony hardwood veneer accents. The seats have been finished in white leather upholstery and a cherry-red divan brings color to the space, while the black carpet is decorated with a white branching pattern. Satin-finished nickel plating adds to the futuristic appeal of the design. 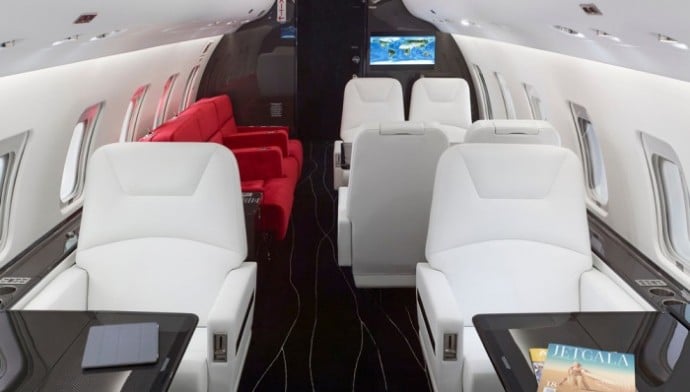 The Challenger is configured to seat 16 passengers in three cabin sections: the forward area featuring four club seats, the mid-section having a divan opposite standard double seats to create a meeting area, and the third area to the rear with a half-club layout with a berthing divan, beyond which is the rear lavatory. The cabin is equipped with a flight entertainment system featuring 22-inch widescreen displays and the Rockwell Collins Airshow 4000 system, with software modified for the Asian region. SwiftBroadband connectivity supports inflight phone and wireless Internet service. 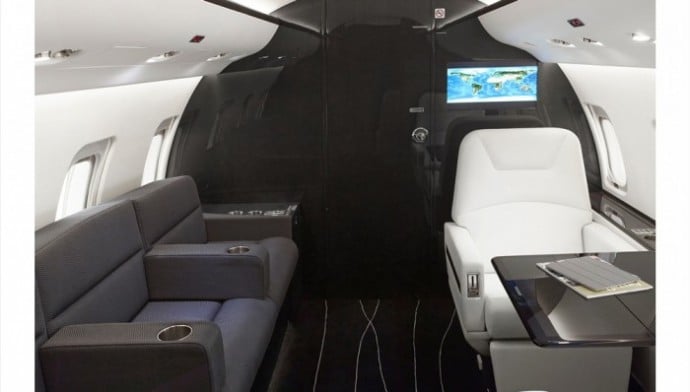 This is the first time we’ve worked so extensively with carbon fiber on the interior of an aircraft,” said Flying Colours vice president Eric Gillespie. “The client chose the material for purely aesthetic reasons and where you would normally only use wood veneer, for example the tables, galleys, bulkheads, hand rails, lavatory vanities and toilet enclosures, we’ve used carbon fiber.”

Tags from the story
Carbon-Fiber, Private-Jets