The last week’s devastating flooding in Western Europe is one of the worst in over a century, and it has already killed 196 people, with hundreds still missing. Germany and Belgium are the two worst-affected countries, with the deadly natural disaster wiping out many thousands of houses and destroying many towns and villages. The internet is full of heart-wrenching videos and pictures of the havoc created by the flood. A few days back, we saw a video of a ruined Audi dealership in Leverkusen that shows the extent of the damage caused by the flood. A new video has surfaced online that shows a similar fate suffered by the Porsche Centre Heilbronn dealership.

The video posted on Twitter shows several brand new Porsches submerged in muddy water outside the dealership. Some of the cars even have their white protective stickers on them from the transportation. The Porsche that can be seen flooded in the video include at least three 992-generation 911 – including a 911 Carrera 4S Cabriolet, a 911 Turbo and another 911 Coupe. A few Porsche Macan and Cayenne SUVs can be seen in the video, including a Cayenne E-Hybrid version with the charging cable still plugged in. 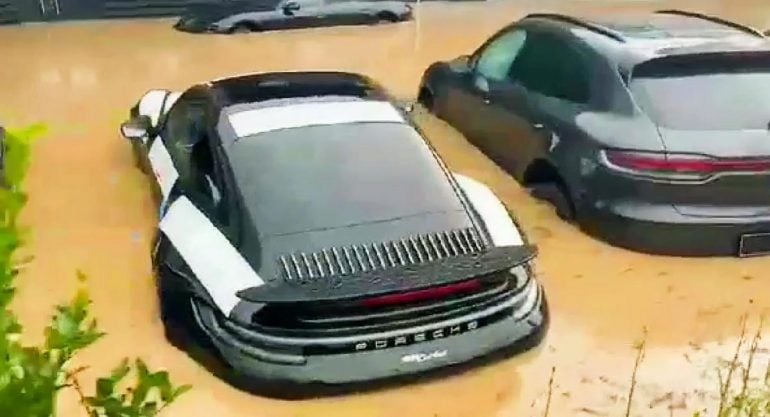 Parked right in front of them is a Porsche Taycan EV in black with the water level up to its wheel arches. These were just the cars parked outside the dealership, and there could be many more inside the building, which includes used Porsches. Thankfully, all the employees are safe, which is the most important thing. Our hearts go out to all the families who lost their loved ones or were affected by the floods. 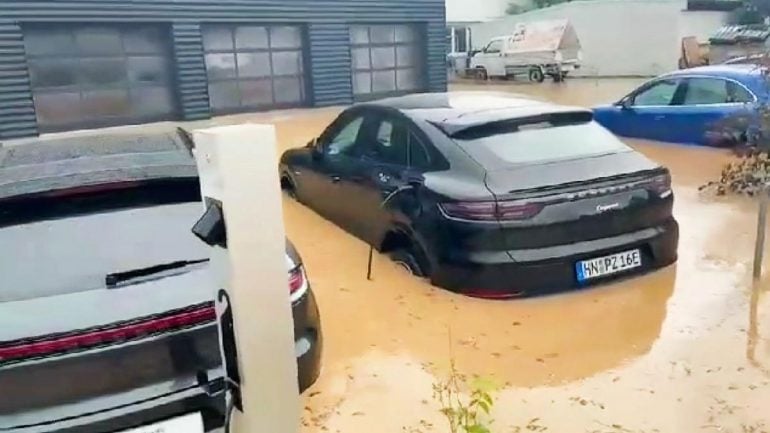 Tags from the story
Europe, Porsche