There’s a famous old saying that goes, “Four wheels move a body, two wheels move the soul.” Motorcycles have quintessentially been a symbol of freedom and carefree attitude – something the world cinema has successfully used over many decades to create memorable characters. And the legacy of those iconic characters is built upon some truly exceptional motorcycles that have permanently etched their names in the movie history. Here are 7 of the most iconic motorcycles in film arranged in no specific order. 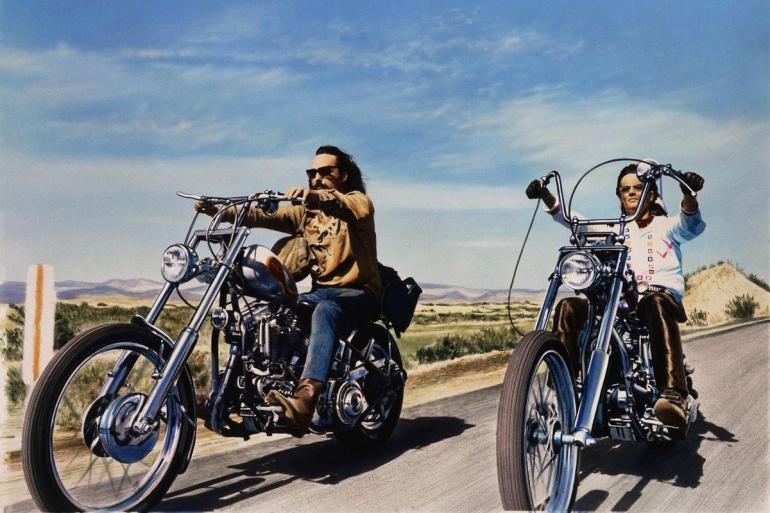 Easy Rider – 1959 Harley-Davidson chopper
More than 50 years ago came one of the greatest motorcycle movies ever made – Easy Rider. The Hollywood movie was a cinematic definition of why motorbikes are often associated with a sense of freedom. Every bit of it established the fact that motorcycles are cool. Although four different motorcycles were used for the filming of the movie, Peter Fonda’s custom-built chopper with the iconic “Captain America” stars-and-stripes fuel tank stood out from the rest. It was built out of a 1952 Harley-Davidson Hydra-Glide was bought by Fonda at a police auction. It’s a shame that none of the four motorbikes from the movie exist anymore; while one of them was destroyed in the last scene, the rest of the three were stolen and believed to be stripped for parts. 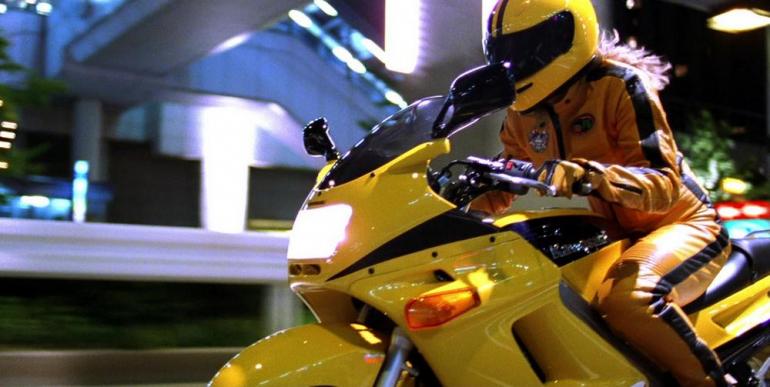 Kill Bill Vol. 1 – Kawasaki ZZR 250
Quentin Tarantino’s 2003 martial arts movie Kill Bill Vol. 1 made as an homage to grindhouse cinema was a blockbuster hit and became Tarantino’s highest-grossing film up to that point. With a simple revenge plot, the movie revolves around the character named ‘The Bride’ played by Uma Thurman who is on a mission to hunt down her ex-fiancé. The former assassin famously dons a yellow outfit with black stripes which is inspired by Bruce Lee’s yellow jumpsuit from his unfinished movie Game of Death. Set in downtown Tokyo, The Bride rides a yellow Kawasaki ZZR 250 (also known as Ninja 250) that matches her leather suit in pursuit of those who conspired to kill her. The shiny quarter-liter sportbike visually plays an important role in the movie’s cinematic composition. 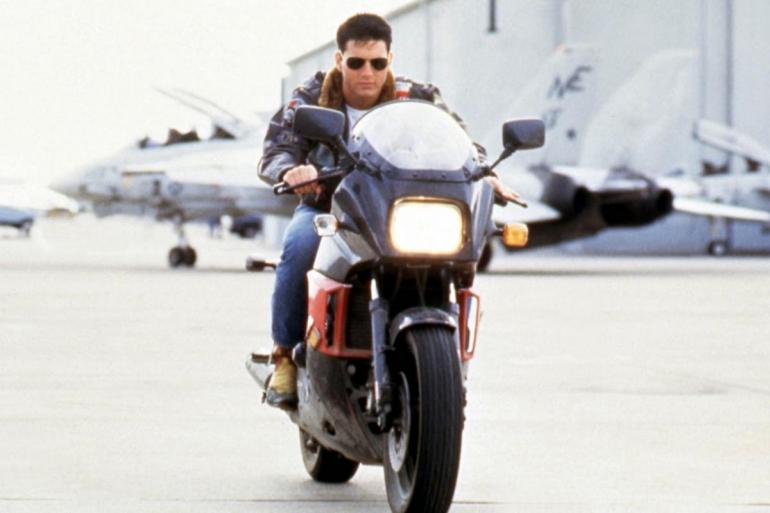 Top Gun – Kawasaki GPZ 900R Ninja
The Top Gun movie starring a young Tom Cruise in the character of a hotshot Navy pilot was all about supersonic F-14 fighter jets and crazy aviation stunts. However, Maverick’s Kawasaki GPZ 900R Ninja played a memorable cameo in the movie despite being completely incidental to the movie’s plot. The part where Tom Cruise wearing aviator sunglasses and a biker jacket races his motorcycle against a naval jet is considered one of the most iconic scenes featuring the American actor. In fact, the Japanese sportbike will make a return in the upcoming Top Gun sequel which will be seen alongside its spiritual successor – the Kawasaki H2 Carbon. 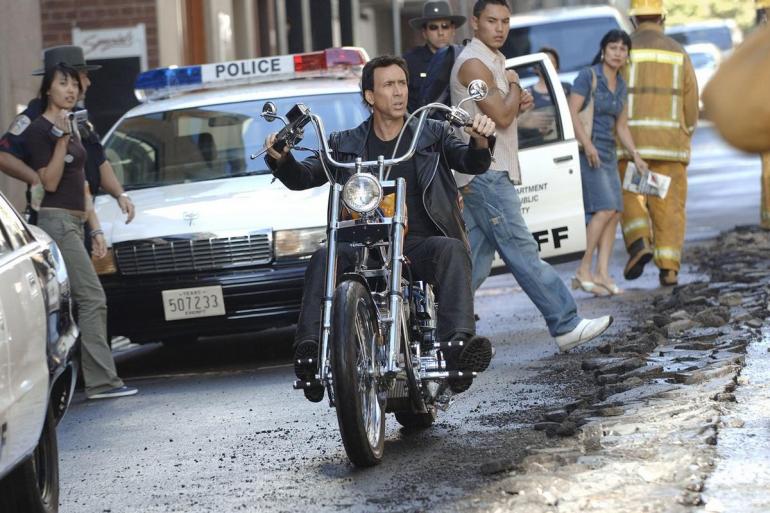 Ghost Rider – Harley-Davidson Panhead chopper
The 2007 American supernatural movie Ghost Rider starring Nicolas Cage as Johnny Blaze, a stunt motorcyclist, might not be very popular with true-blue motorcycle enthusiasts, but the custom chopper from the movie was super cool. If it reminds you of Peter Fonda’s Harley chopper from Easy Rider, there’s a good reason behind it. The Ghost Rider chopper with its massive ape hanger handlebars and long front fork was actually modeled after the Easy Rider bike. That’s not the only connection with the cult classic, although; Peter Fonda himself stars in Ghost Rider playing the role of Mephisto the Devil. The motorcycle was built especially for the movie and was powered by a Harley-Davidson Panhead engine. 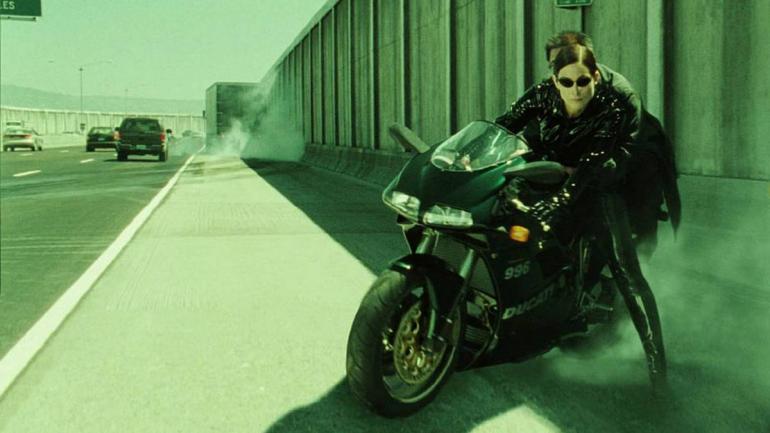 The Matrix: Reloaded – 2001 Ducati 996
The Matrix trilogy has some of the greatest movie stunts ever shot and one of the most memorable of them is one in which Trinity, played by Carrie-Anne Moss, rides a 2001 Ducati 996 to escape the agents and protect the Keymaker, weaving through the freeway traffic in the opposite direction. The sportbike was in production from 1999 to 2001 and had 112hp, which was enough to give it a top speed of 161mph. While the movie featured a 2001 Ducati 996 wearing dark green paint, the motorcycle was replaced by 998 by the time the movie hit the theatres. Ducati partnered with the makers of the movie to release a limited run of Matrix Edition 998 which was aesthetically similar to the motorcycle used in the filming. 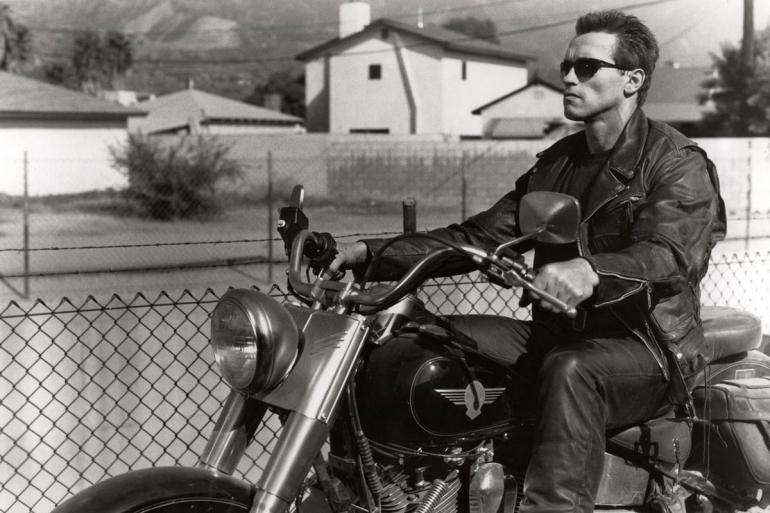 Terminator 2: Judgment Day – Harley-Davidson Fat Boy
Who can forget the scene where Arnold Schwarzenegger walks into the bar naked and delivers the iconic dialogue, “I need your clothes, your boots, and your motorcycle.” The Terminator walks off the bar with a leather jacket, a pair of ultra-cool sunglasses, a Winchester shotgun, and keys to a Fat Boy. One of the most audacious motorcycle stunts was also pulled off for the movie in which the 300+kg Fat Boy is jumped into a 3-meter-deep LA sewer. The motorcycle was newly added to Harley-Davidson’s line-up back then and not only did it play an important role in making the sci-fi action movie a great success but the movie itself helped Fat Boy become Harley’s one of the best selling models ever. 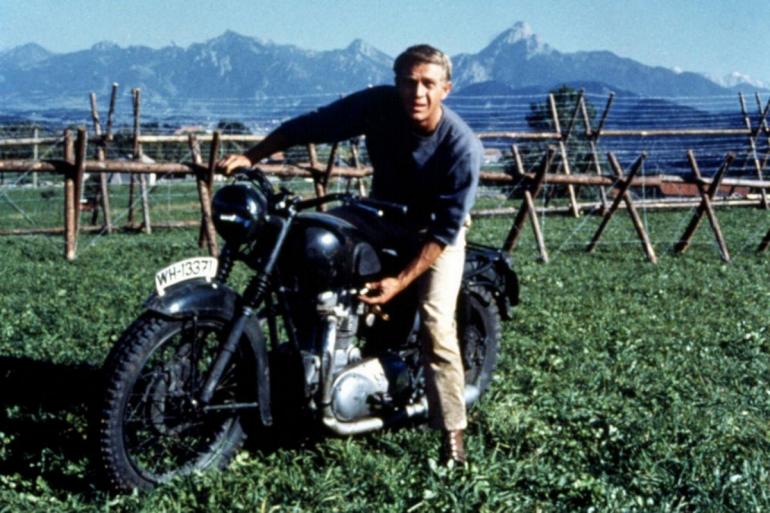 The Great Escape – 1961 Triumph TR6 Trophy Bird
Steve McQueen was a Hollywood megastar in the ’60s who earned himself the nickname ‘The King of Cool’ for breaking the conventional mold of a hero. McQueen was also a bonafide petrolhead who loved his cars and motorcycles; something exhibited by the kind of movies he did. Amongst them is the movie ‘The Great Escape’ which is based on the true events of WWII. In the role of a US airman named Captain Virgil Hilts, McQueen plans a mass escape from a German POW (prisoners of war) camp and manages to get hold of a German army motorcycle. The movie features one of the most iconic motorcycle stunts ever in which McQueen jumps the motorcycle over barbed wire in an attempt to cross over the German border. A 1961 Triumph TR6 Trophy Bird was specially modified for the stunt and disguised as a BMW R75. It is said that McQueen wanted to do the stunt himself which demanded the motorbike to make a jaw-dropping 60-ft jump over a wired fence.