After months of teasers and spy shots, the 2023 BMW 7-Series sedan was recently revealed hot on the heels of the updated X7. The new bold, in-your-face design language adopted by the German automaker on both the flagship models has managed to shock everyone, with many even comparing it to the Bangle-era 7-Series of the early 2000s. However, there’s a lot more to the 7 Series than its polarizing design. The range-topping is loaded with some seriously impressive tech and industry-first features. And to top it all off, the flagship luxury limo now has an all-electric version for those who want to go green without compromising on top-tier luxury. Here are 7 interesting things you need to know about the 2023 BMW 7-Series. 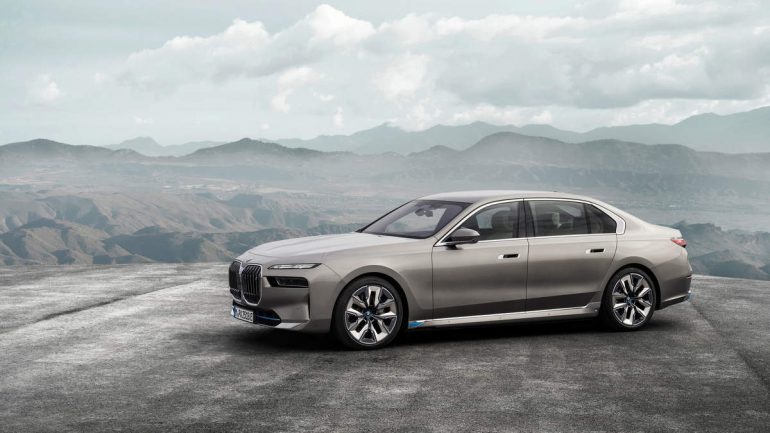 1. Most polarizing BMW ever made
A little more than two decades ago, BMW decided to veer away from the quintessentially understated German design language in favor of quirky, radical designs, which was spearheaded by the company’s then Chief of Design, Chris Bangles. The new 7 Series’ polarizing design seems like the return of BMW’s Bangle-era, only in a more ferocious form. BMW realized that it needs the flagship model to stand out not only in its portfolio but also from its competition, and giving it a shocking exterior design is what the Bavarian chose to address it – something that has mostly worked for BMW in the past. 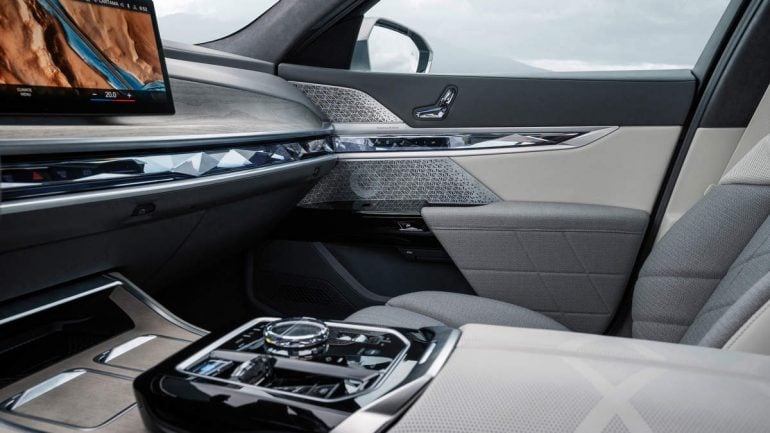 You might dislike the new design but can’t ignore it, which is exactly what BMW wants. The idea was to create a memorable design, and the German automaker aced it. Unlike the outgoing 7 Series which only had the bucktooth kidney grille as a shocking design element, the new 7 is wrapped in prominent styling features. Its boxy design is in sharp contrast to the likes of the new S-Class, the bulbous EQS, or even the Audi A8. 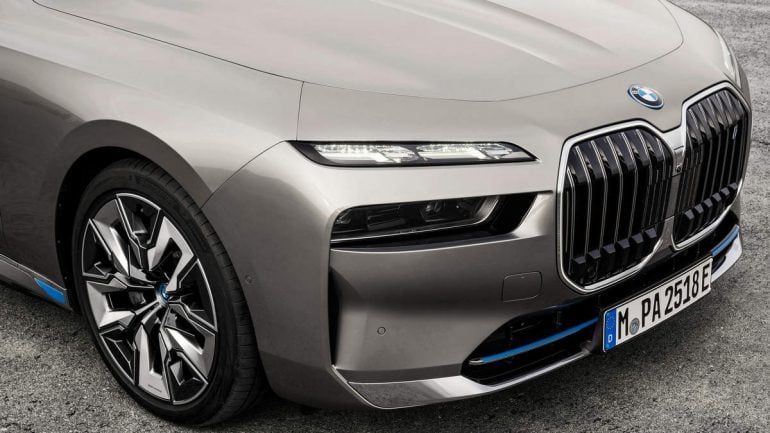 And yes, the massive kidney grille is here to stay. Rather it has been made more prominent, especially in the battery-electric i7 that features an illuminated outline around it. 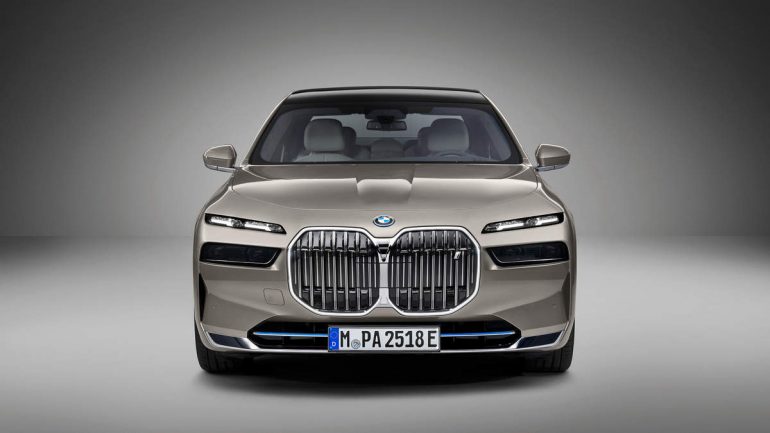 2. Taking the split-headlight design trend to a new level
The new split-headlight design was previewed on the updated X7 by BMW a few days ahead of officially revealing the 2023 7 Series and it has become just as polarizing as the bucktooth grille. Although it’s currently a very popular trend in the automotive, split-headlight design can mostly be seen on SUVs, which is why the fascia of the new 7 Series looks rather odd. Maybe it will grow on us, maybe not! But it’s certainly not finding too many fans right away. 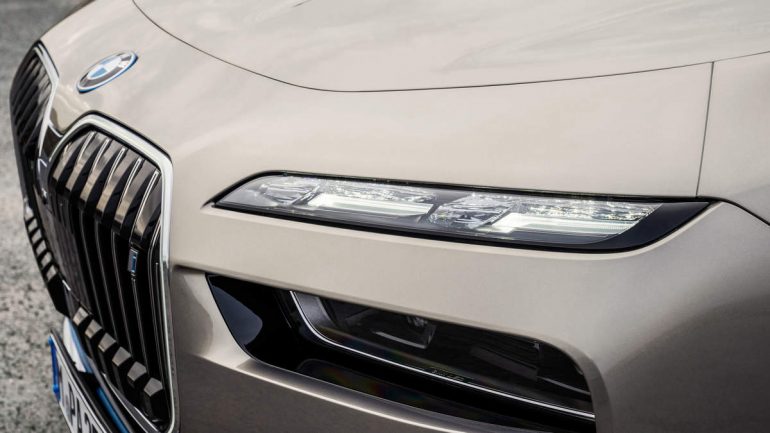 The boxy front has thin eyebrow DRLs at the top and headlight clusters right below, integrated into the bumper design. The headlights are darkened and stay almost undetected when the exterior is in black or any other dark shade. Strangely, BMW didn’t go for anything outlandish in the case of the taillights that are long, sleek, and rather simple. 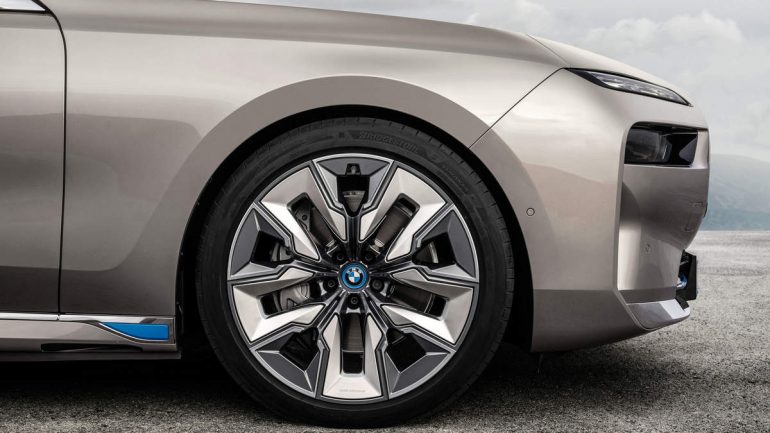 3. Air suspension as standard equipment
Instead of offering air suspension as an optional extra or earmarking it for top-trim, BMW is giving it as standard equipment across the whole 7 Series range. The two-axle air suspension system features automatic self-leveling and electronically controlled adaptive dampers. The auto-leveling system can lower the car by 10mm at higher speeds for more stability or raise it by 20mm for more ground clearance while encountering bad roads. It is aided by a brand new power steering system that can adapt with steering angle and gets speed-sensitive power assistance. Furthermore, the Autobahn package adds active anti-roll bars to further improve stability. The rear-wheel steering can turn the rear wheels by up to 3.5 degrees, which significantly reduces the turning radius. 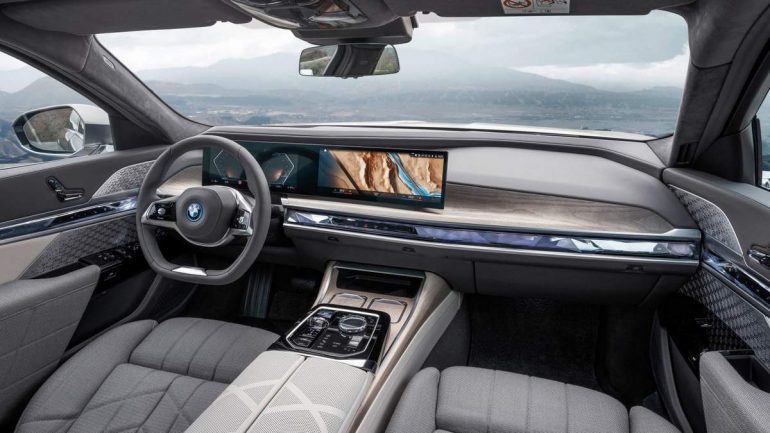 4. A beautiful dashboard that’s minimalistic yet loaded with technology
The cabin design has been completely revamped with a thoroughly modern and minimalistic approach, which is perfectly exhibited by the new clutter-free dashboard design. Similar to what you get on the i4 and iX, the new 7 Series gets a curved display that is made up of a 12.3-inch gauge cluster and a 14.9-inch infotainment screen. Just about all physical buttons have been replaced with on-screen controls, while the center console has also been reworked to feature touch-capacitive buttons and a toggle-switch gear selector instead of a stick. 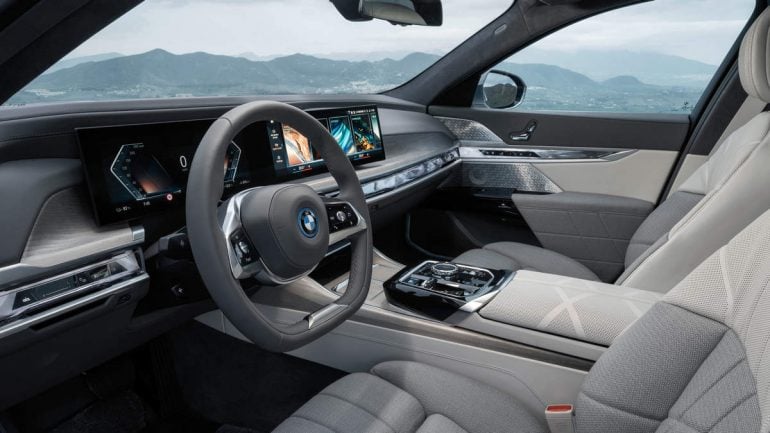 The air vents are neatly hidden behind the beautiful dashboard that also features what BMW calls the “Interaction Bar.” It’s a strip that runs the full width of the dashboard that has a very eye-catching crystalline surface and adjustable backlighting. 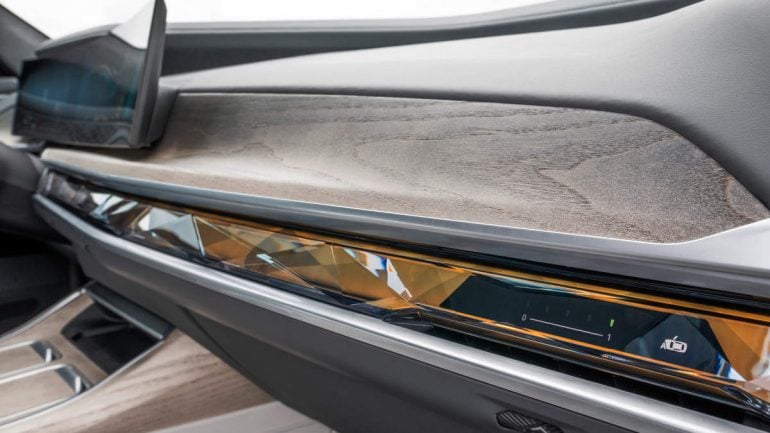 The functional trim houses touch-sensitive control panels for adjusting the ventilation and air-conditioning, activating the hazard, and opening the glove compartment. The new 7 Series also gets a new two-spoke steering wheel, but it also gets a hands-free highway driving aid. 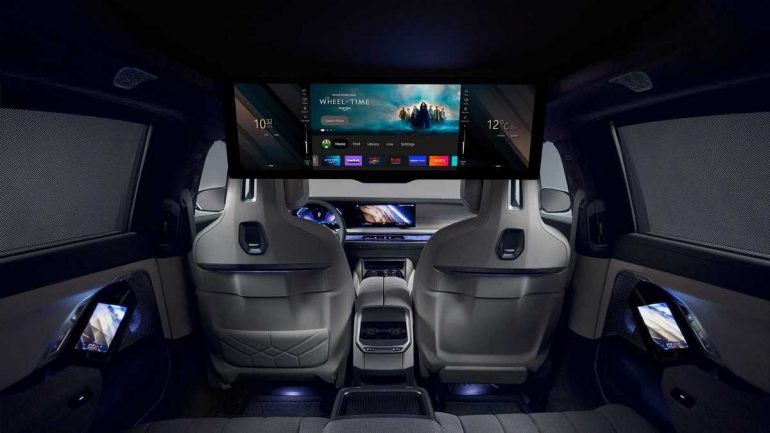 5. Gigantic roof-mounted 8k screen
The highlight of the new 7 Series cabin, however, is the enormous “theater screen” that drops from the ceiling to keep the rear passengers entertained. The industry-first feature is an optional extra that is priced at $4,750. For that price what you get is a 31-inch screen with a strange 32:9 ratio and capable of supporting up to 8K resolution. The 5G antenna lets the system stream UHD videos from Amazon and Netflix while on the move in addition to things like playing games, listening to music, and more. 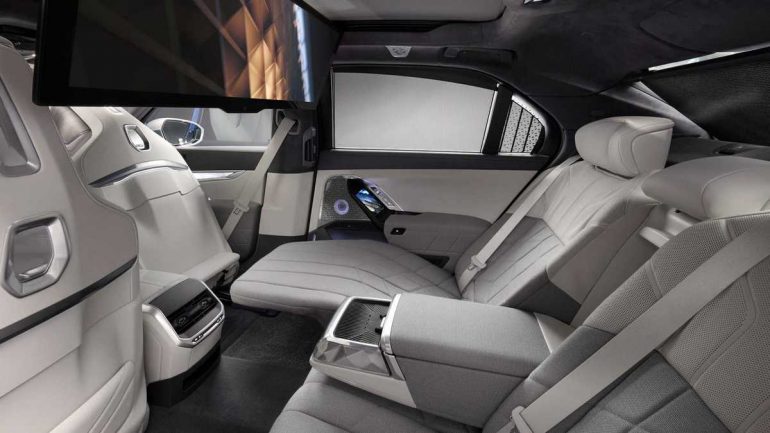 Activating the screen immediately makes window shades go up, dims the cabin lighting, and creates a private theater inside the car. Add to it the optional Executive Lounge package and what you get is the extremely comfortable rear seats that can recline by more than 42 degrees. 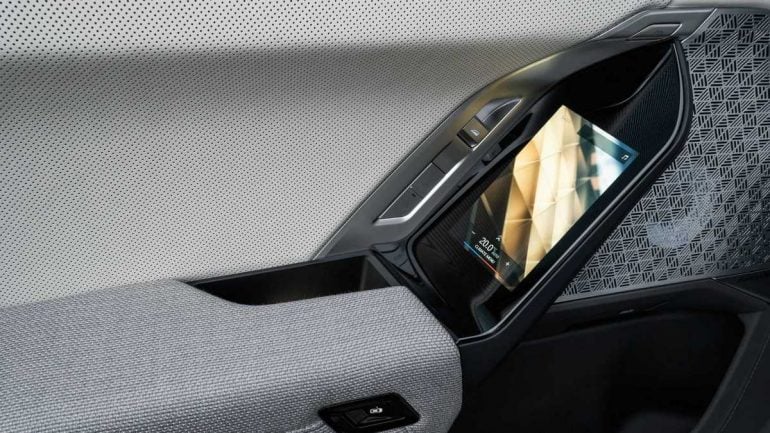 6. Smartphone-like door displays door
There’s an overdose of digital displays inside the new 7 Series and it can be overwhelming for a lot of people. BMW has equipped the flagship luxury limo with iPhone-like door-mounted 5.5-inch touchscreens for the rear passengers, which replaces the tablet display found in the out-going model. The tiny touchscreens can be used for controlling virtually everything, including the audio system, climate control, seat adjustment, ambient lighting, and rear sunshades. 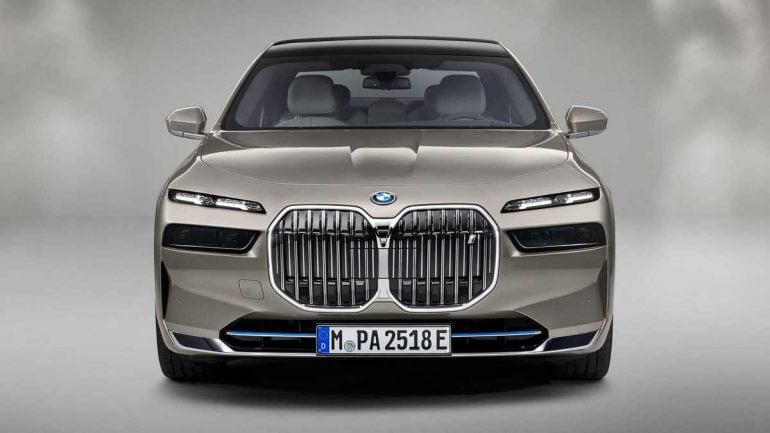 7. The all-electric i7 is a powertrain option in the same range rather than a separate model
This brings us to the last and crucially the most interesting point. BMW has taken a very different approach to introduce their very first battery-electric flagship sedan, the new i7, which is in stark contrast to the route taken by Mercedes to launch the EQS sedan. Instead of creating a completely separate product line-up for the electric offering, BMW has introduced the i7 as another trim level in the 7 Series product range, which certainly is a very interesting approach. BMW expects the battery-electric i7 to be a very popular option amongst buyers, which will be available in two versions – xDrive60 and a more powerful M70 that’ll come next year. 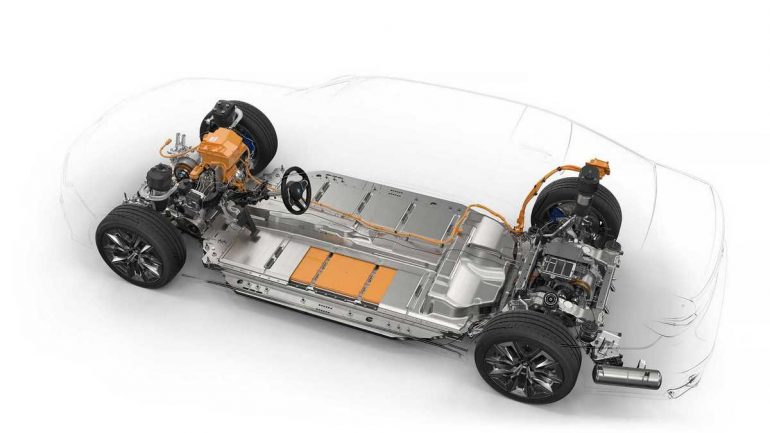 The i7 comes equipped with a floor-mounted battery pack that has 101.7-kilowatt-hours of usable capacity, which is enough to give the electric luxury limo a WLTP range of 390 miles. The model features two electric motors mounted on each axle and powering all four wheels. The setup can deliver a maximum output of 536 hp and 549 lb-ft of torque in the xDrive60, which is enough to propel the massive automobile from zero to 60mph in 4.5 seconds on the way to an electronically-limited top speed of 149mph. The M70 will reportedly have over 600 hp and 737 lb-ft of torque, giving it a sub-4 second 0-60 time.