It’s astonishing how quickly Mercedes-Benz has created a sizeable line-up of battery-electric vehicles in such a short period. It all began with the EQC Concept that was showcased in 2016, which was later turned into a production model that went on sale in 2019. The German automaker recently announced its plan to expand the EQ range of EVs to 10 models by the end of 2022, which includes the new 2023 Mercedes-Benz EQS SUV that debuted a week ago. The flagship electric SUV, although, closely resembles the EQS Sedan and shares many of its specifications, but it’s packed to the rafters with cutting-edge tech and ultra-cool features that deserve a closer look. Here are 7 things about the ESQ SUV that make it one of the coolest EVs. 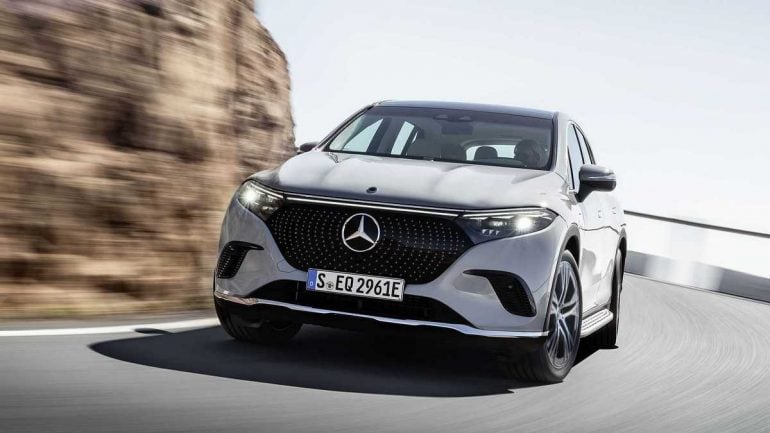 1. Mind-blowingly complicated LED headlight with more than a million mirrors inside
Expectedly, the new flagship battery-electric SUV prominently features the automaker’s “one-bow” design language that was specially created for all the vehicles from the EQ sub-brand. This includes the bulbous aerodynamic design and the distinctive smiling fascia with its gloss-black grille panel housing a big, centrally located Mercedes star and flanked by sleek headlights. It looks almost identical to the EQS sedan until you look closely. While the headlights on the range-topping electric sedan have three lighting elements in the form of dots, they are triangular in design on the SUV model. But don’t let the sleek styling of the headlamps fool you; they are seriously impressive. They feature Mercedes’ proprietary Digital Light technology; there are 1.3 million micro-mirrors inside that can not only project the Mercedes logo but also symbols and warning signs onto the road surface. If you find it gimmicky, think again! 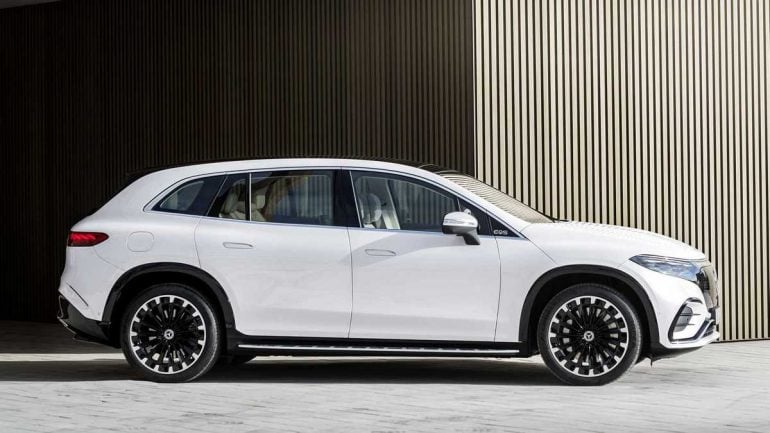 2. Possibly the most aerodynamic production SUV to date
Mercedes hasn’t officially revealed the drag coefficient of the massive SUV, but we won’t be surprised if it beats the Tesla Model X’s 0.25 figure to become the most aerodynamic production SUV to be ever made. The German manufacturer went to extreme lengths to make the EQS SUV as slippery through the air as possible, which even includes the shape of the taillights that have been designed to optimize the aerodynamics of the SUV. While most of those design features for optimized airflow are not obvious to the untrained eye, the design of the special 21-inch wheels screams of aerodynamic trickery. Not only do they look cool but also minimize drag while also channeling to the brakes for cooling. If that’s not enough, Mercedes even designed a special running board that also offers aerodynamic advantages for maximizing the electric range. 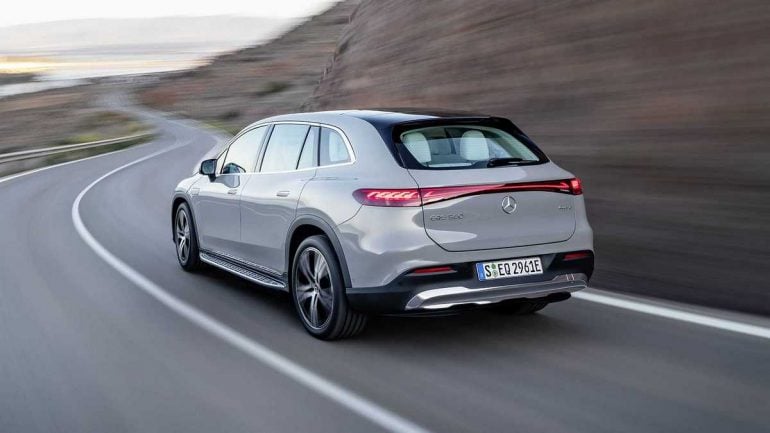 3. Turning radius of small crossover
The Mercedes EQS SUV is massive, make no mistake about it. While it’s shorter by a couple of inches in comparison to the EQS sedan, both the models have the exact same wheelbase of 3.2 meters. When you add massive 21-inch wheels to the equation, the full-size SUV should have a turning radius of the moon. Instead, the EQS SUV can turn around in a little more than 10 meters, which is comparable to much smaller models. That’s made possible with the help of the standard rear-axle steering with a steering angle of up to 10 degrees. While it makes the huge 7-seater feel agile in city and suburban traffic with little steering effort, it also offers a very high level of stability at higher speeds by turning in the same direction as the front wheels. The system switches from counter-direction to same-direction steering at more than 31mph. 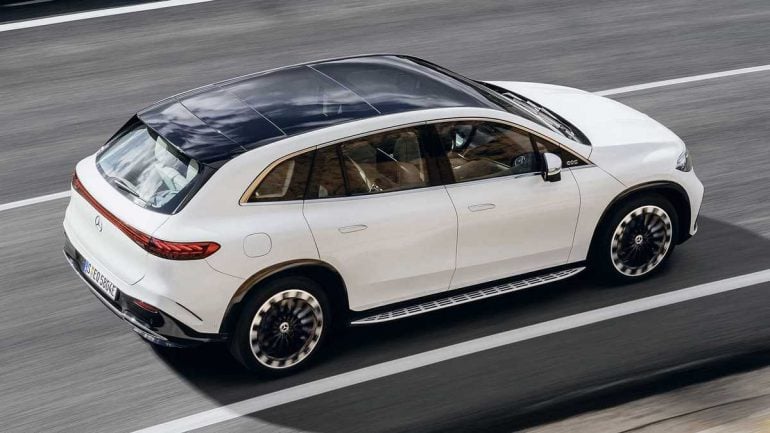 4. Clever 4-wheel-drive system and off-road mode
The EQS 580 4MATIC SUV with its electric all-wheel-drive system is much faster than comparable mechanical AWD systems. According to Mercedes, the highly-technical system checks the torque sent to all four wheels 10,000 times per minute, enabling lightning-quick adjustments to offer the best possible traction under different driving situations. The system comes into its own while tackling off-road conditions, which is further assisted by Airmatic air suspension with continuously adjustable damping ADS+ that’s offered as standard equipment. In the off-road mode, the vehicle is raised 25mm, while the gas pedal response also changes. 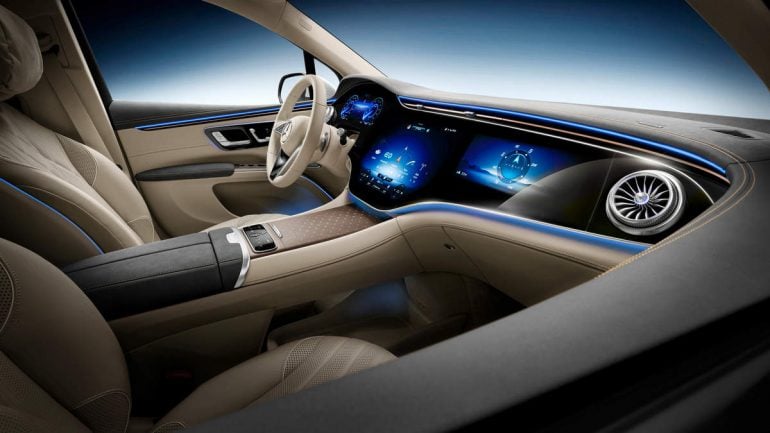 5. MBUX Hyperscreen – the mother of all infotainment displays
The humongous MBUX Hyperscreen that debuted on the EQS sedan is offered as standard equipment on the EQS 580 and is optional on the 450 versions. The pillar to pillar unit that measures 56 inches in width covers the entire dashboard and gives the illusion of being a giant, single screen. However, it’s made up of a 17.7 OLED center display, a 12.3-inch instrument panel, and a 12.3-inch front passenger-facing touchscreen. The cluster is placed behind a single sheet of high-strength glass that’s made using a highly-complicated process for distortion-free view and scratch resistance. 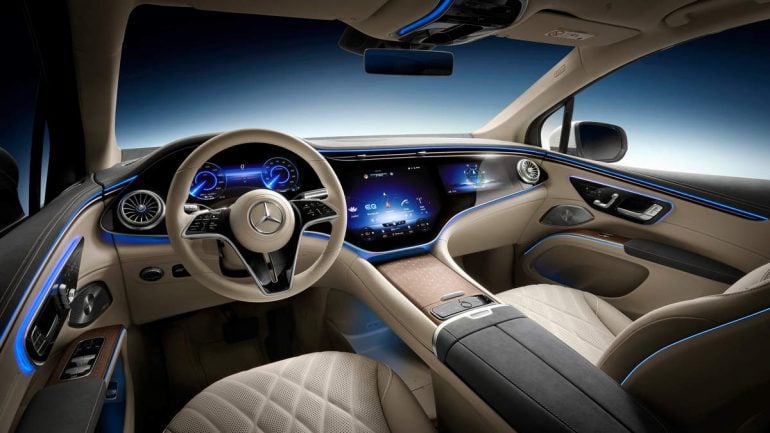 It works in combination with the SUV’s incredible Burmester 3D audio system that incorporates Dolby Atmos technology. For the new EQS SUV, Mercedes has updated the system with a nifty new feature. The front passenger can watch videos on the 12.3-inch while the vehicle is moving, but the system will automatically dim the screen if it catches the driver trying to look at it by using the driver monitoring system to track their eyes. 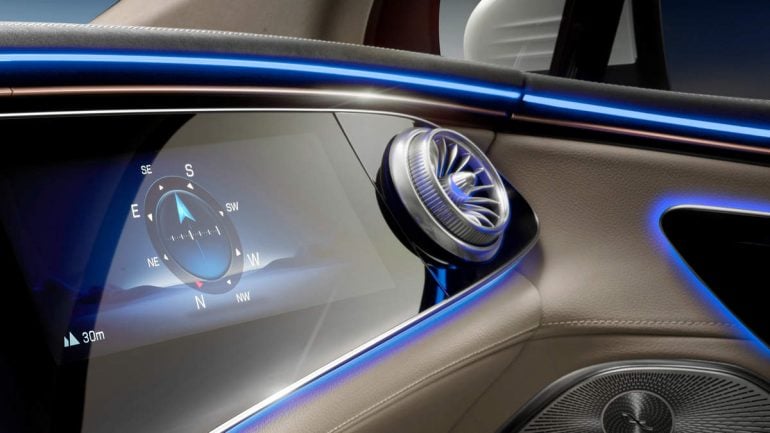 6. Air purification that matches the level of an operating room
The EQS SUV’s Energizing Air Control Plus system can filter out particulate matter, microparticles, pollen, and other substances at an unprecedented level with the help of its multi-stage HEPA filter. The system is based on filtration, sensors, a display concept, and air conditioning. The HEPA filter has the “OFI CERT” ZG 250-1 certification in the area of viruses and bacteria, while it has around 600 grams of activated carbon with an adsorption area equivalent to about 150 football fields which can easily filter out sulfur dioxide, nitrogen oxides and unpleasant odors. It also displays the air quality inside and outside the cabin on the MBUX system. 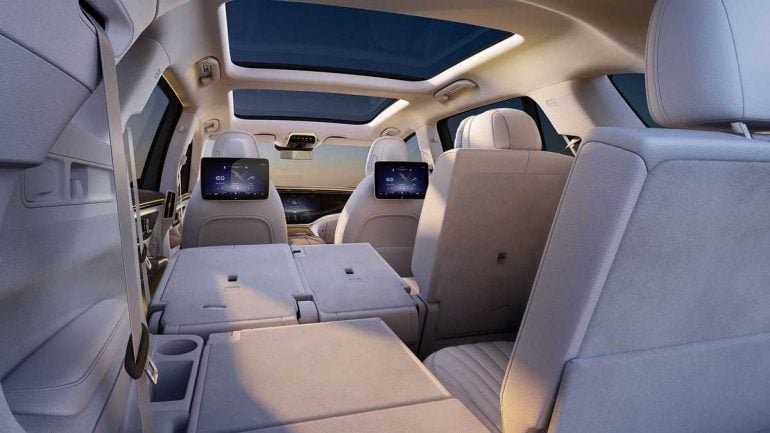 7. The EQS SUV is here to take the crown of the best luxury electric SUV
The Mercedes-Benz EQS SUV is ready to lock horns with the Tesla Model X and the BMW iX and sit at the segment leader. The flagship battery-electric SUV has been launched in three versions: rear-wheel-drive EQS 450, EQS 450 4Matic, and EQS 580. The base EQS 450 SUV uses a single motor on the rear axle to produce 355 horsepower and 419 pound-feet of torque, while the range-topping EQS 580 SUV has two electric motors at axles that cumulatively produce 536 hp and 633 lb-ft. All three versions get the same 107.8-kilowatt-hour battery pack mounted on the floor. 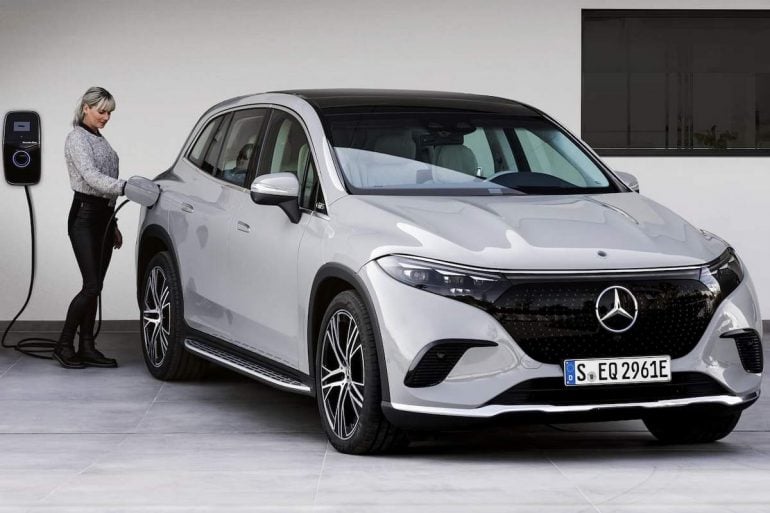 Mercedes says the single motor 450 has a WLTP range of 373 miles, while the estimated range for EQS 580 is yet to revealed. The manufacturer says the battery can go from 10 to 80 percent in 31 minutes using a DC fast charger. The pricing is yet to be announced but the range-topper is expected to carry a price tag of $130,000. The German automaker is also expected to release an AMG and more luxurious Maybach versions in the future.

To avoid being seized, Titan the $100 million superyacht of one of Roman Abramovich’s close…

This $2 billion personal submarine is so huge that it can dwarf a megayacht. The…

Officially the biggest scotch in the world, this 6-foot-tall bottle of Macallan whisky is going…

The world’s largest blue diamond was sold for $57.5 million at a Sotheby’s auction in…