Mercedes Benz has revealed the SL-Class 417 Mille Miglia special edition package set to make its public debut at next month’s Geneva Motor Show. The year 1955 was a very important year in the history books of Mercedes as it marked the Drivers’ Championship win for Juan Manuel Fangio in Formula One and an unforgettable victory by Stirling Moss in a Mercedes-Benz 300 SLR at the same year’s Mille Miglia race. During the same race, a Mercedes-Benz 300 SL with racing number 417 won its class in the hands of the John Cooper Fitch, together with his navigator Kurt Gesell. The Mercedes Benz SL 417 Mille Miglia special edition package commemorates the 60th anniversary of that historic breakthrough. 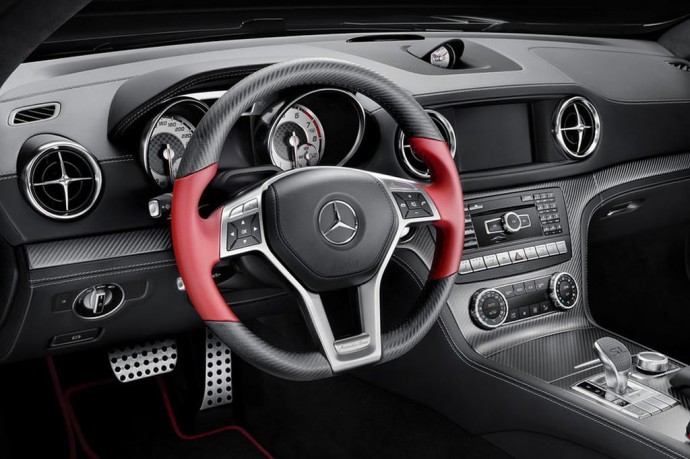 The Mercedes Benz SL 417 Mille Miglia special edition package features a host of aesthetic upgrades. As for the cosmetic changes to the styling is concerned, the special edition model gets exterior and interior upgrades including a bootlid spoiler, red and matte carbon accents, as well as AMG 19-inch (front) and 20-inch (rear) wheels. The Mercedes-Benz SL 417 Mille Miglia will be offered with two engine versions: the SL 400 333PS biturbo V6 and the SL 500 455PS biturbo V8. In addition to it, the SL 417 gets adaptive dampers for more stability in corners, as well as the optional ABC (Active Body Control) system. The package is priced at €14,000 ($16,000 approx) for the V6 version and €12,800 ($14,600 approx) for the V8 (in Germany).

Tags from the story
Mercedes-Benz, Special-Edition