Superyacht Le Grand Bleu belonging to Roman Abramovich’s buddy, Russian-American oil tycoon Eugene Shvidler is a magnificent and very lucky vessel. The massive 370-foot ship left the port of Ponce, Puerto Rico, just in time and escaped the full impact of Hurricane Fiona. The $175 million vessel reached halfway to Venezuela with a skeleton crew to run operations. It is observed that Shvidler’s luxury motoryacht is back to its Puerto Rican bay with the AIS switched off. 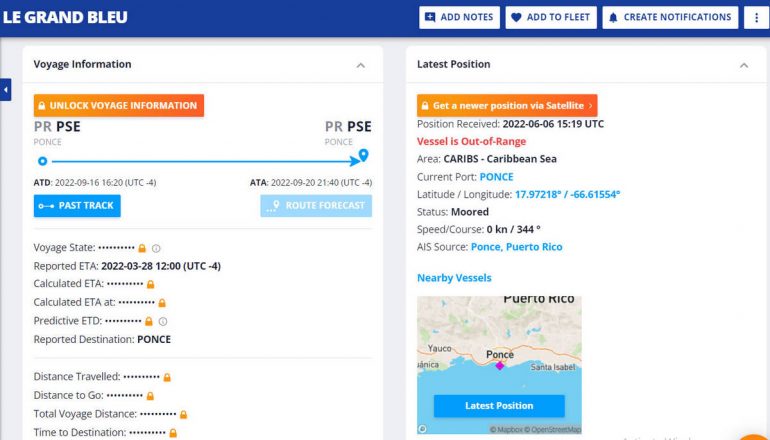 While some speculate the trip was made for a refuel, some followers posted questions on the eSysman Superyacht channel on why a sanctioned billionaire’s yacht is roaming the high seas freely at the risk of getting seized. The man who won the beautiful Le Grand Bleu in a poker game is sanctioned by the UK and not by the US officials, which explains why the boat is sailing freely on American shores.


The UK government sanctioned Eugene Shvidler-
Oil tycoon Shvidler suffered a similar fate as his friend, Chelsea F.C. owner Roman Abramovich, and was sanctioned by the UK government. The man enjoyed a net worth of $1.6 billion, faced allegations that he partnered with Abramovich to gain control of oil giant Sibneft via an auction in 1995, which, according to the Irish Independent, is “suspect of having been rigged.”
UK has also seized Eugene Shvidler’s two private jets-
“Putin’s friends” should not “enjoy luxuries” stated UK transport Secretary Grant Shapps. The friend is billionaire Eugene Shvidler, and the luxuries in question were not one but two private jets belonging to the Russian tycoon. The seized jets are believed to be worth up to $60 million. BBC shared Mr. Shapps’ statement: “Introducing these latest measures – detaining tens of millions of pounds worth of Russian private jets – shows this government will leave no stone unturned in depriving Putin’s cronies of their luxury toys.”