The 2017 presidential inauguration was for the first time in many, many years that a new armored president’s limousine did not debut during the parade. It’s been more than one and a half months since the inauguration and President Trump is yet to get his own Cadillac One; which means, he is still using Obama’s presidential limo. The reason for the delay continues to be shrouded in mystery but the 2017-genration Cadillac One was recently captured in spy shots wearing camouflage paint. Although from fresh the spy shots, it doesn’t look much different from the last generation Cadillac One, it definitely will be more impressive in terms of the features and safety mechanisms than some of the past ‘beasts’ used by his predecessors. The $1.5 million armored limo has a huge list of some of the most advanced safety features making it the safest presidential car in the world. Secret Service maintains secrecy over all the features, and most of them we know about are speculative, but here’s a list of 7 ways the Cadillac One will keep President Trump safe. 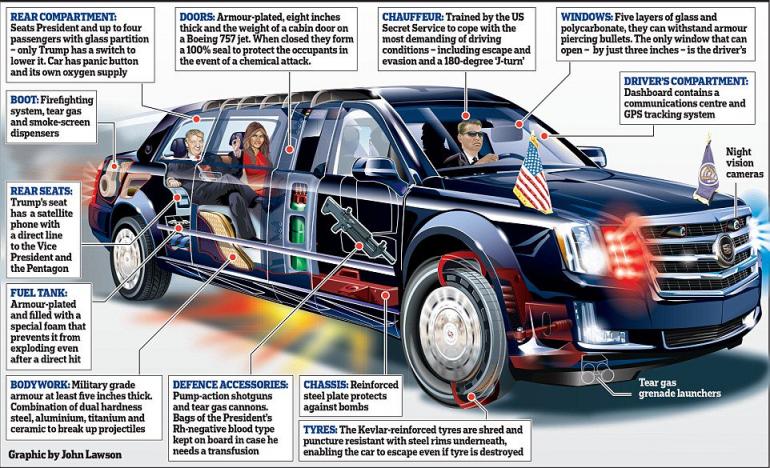 7. Run-flat tires reinforced with Kevlar
Tires are one of the weakest links of a car and destroying them is the easiest and the quickest way to immobilize the vehicle putting it under severe treat. The tires on Cadillac One are specially designed to withstand intense harm from the likes of bullets and spike strips and keep the limo moving. The Kevlar-reinforced tires are shred and puncture-resistant. But even if something manages to damage the tires, they are fitted on bespoke steel rims and have run-flat mechanism that will help drive at high speeds to escape danger.

6. Life support machine
Along with keeping the president safe, one of the most crucial jobs of the Cadillac One is to keep him alive if he is critically injured. The armored Limousine has its own life support unit and a supply of the President’s blood to tackle the worst eventuality.

5. Bulletproof windows that can withstand armor piercing rounds
The windows on the Cadillac One do not roll down except for the one on the driver’s side, which can open only a few centimeters. They are reportedly 5 to 6 inches thick, bomb-proof, and can withstand armor-piercing bullets. The front windscreen can also take the brunt of armor-piercing bullets or a .44 magnum shot from close distance.

4. Custom-built reinforced chassis
The president’s limousine is often called the ‘tank on wheels’ thanks to its near-indestructible structure and chassis. In the scenario of a bomb attack or an IED ambush, the Cadillac One has to keep its occupants safe by maintaining its structural integrity. The custom-built reinforced chassis and a thick steel plate under the car protects it against bombs, IEDs and grenades rolled under the car.

3. Specially designed Interior
Donald Trump is known for his over-the-top taste when it comes to interiors of his private jets and limos. However, the Cadillac One’s interior might be a little too bland for his liking, yet have some of the most sophisticated technology to keep him safe. The interior of the limo is air-sealed against chemical and biological attack. The armored limo also has a special automatic-lock safety system that, in case of emergency, seals off the entire car. The Cadillac One maintains the 2+3+2 conference-style interior seat layout from the previous model and a glass partition inside the limousine can only lowered by the president. Along with a panic button installed for the president, there is a state of the art satellite phone that connects him to the vice president and the Pentagon.

2. Defense equipment
The Cadillac One is literally loaded with defense accessories. The armored limo has night vision cameras installed in the front and back to help the driver drive it without its headlights on. The secret service has never in the past revealed the kind of firepower the president’s limo packs, but pump-action shotguns, and tear-gas cannons are among some of those weapons speculated to be included.

1. Military grade armored body
Coming to the most important safety feature of the Cadillac One – the car’s military grade armored body and other components. The bodywork on the limo is said to be at least 5 inches thick armor. The armor is a combination of dual-hardness steel, aluminum, titanium and ceramic which helps it withstand some of the most lethal projectiles. The doors of the car have armor plating that’s 8 inches thick and are the same weight as a Boeing 757 cabin door. An additional safety feature includes steel overlaps between the seams to protect against bullets entering in the space between the doors and body. Additionally, the fuel tank of the car is armor-plated and filled with a special foam which prevents it from exploding even if it takes a direct hit.

Tags from the story
Cadillac, Donald-Trump