It’s been nearly two decades since the Concorde made its last commercial flight and we are yet to get back commercial supersonic air travel. There is a handful of companies across the world that are trying hard to reintroduce supersonic commercial flights, but the sonic boom has been one of the biggest challenges faced by them. However, a prototype aircraft by NASA is nearing completion which has been specially designed to fly beyond the speed of sound without the sonic boom. The demonstrator supersonic jet named the X-59 QueSST (short for Quiet SuperSonic Technology) is currently in its final stages of construction at the Armstrong Flight Research Center, just outside of Lancaster, California, and should be ready for its first test flight next year. 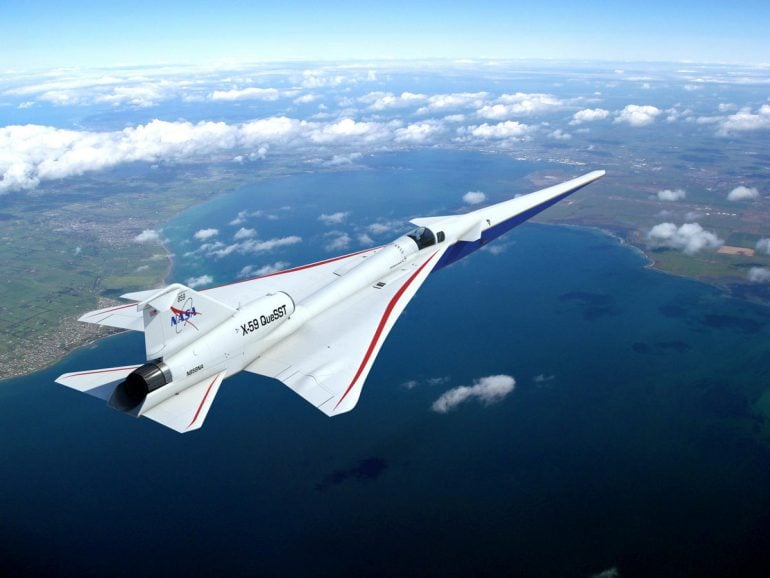 A sonic boom is a shock-wave, or pressure disturbance, caused by the movement of the plane through the air when it flies at supersonic speeds (above Mach 1). Traditional supersonic aircraft can create a sonic boom in excess of 100 decibels during flight. It was the reason why many countries banned supersonic commercial flights over land, including the US. However, the X-59 features an extremely streamlined shape which has been designed to reduce the shock waves that cause a sonic boom mid-flight. According to NASA, only 75 decibels of sound will reach the ground level when the X-59 will fly at supersonic speeds. The space agency compared it to being as loud as a car door slamming down the street.


NASA and Lockheed Martin worked together to design the low-boom aircraft by returning to the basic principles of aerodynamics. “Those principles of physics, of aerodynamics, have been around since the beginning of time,” said Lockheed Martin’s X-59 program director, David Richardson. “This is what Mother Nature wants to see. Just like birds are perfectly designed, this airplane is being perfectly designed to fly supersonic as quiet as it can.” The aircraft measures slightly less than 100 feet in length but only carries one passenger. The nose alone measures 30 feet in length and takes up one-third of the plane.
The cockpit doesn’t have a front-facing window and the pilot will have to rely on an External Vision System (XVS) created by NASA to fly the plane. The first flight will take place in 2023, followed by 18 months of testing to confirm the aircraft’s performance and safety. Beyond that, NASA plans to conduct a series of test flights between 2025 and 2026 with the aim to convince regulators to overturn the ban on supersonic passenger travel over land.
Tags from the story
NASA, Supersonic