Most modern movies use a lot of CGI (computer-generated imagery) to create magical cinematic sequences that are almost impossible to shoot in the real world. However, there are still few movie franchises that prefer to go the old-school way and shoot exhilarating stunts without green screens. The behind-the-scenes videos of those shots are just as interesting to watch as the stunt sequences. It’s absolutely jaw-dropping how difficult it is to shoot such sequences, which sometimes demand ingenious ideas to tackle unique issues. All the stunts in the new Bond movie, No Time to Die, are real, including the climax of the opening car chase that can be seen in the trailer, as well. The sequence was shot on the ancient streets of Matera, Italy. But the beautiful cobbled streets presented a unique problem – they were too slippery to perform high-speed maneuvers for the chase scene.

A video by Insider has uncovered the clever technique used by the stunt team to shoot the chase sequence. To deal with the slippery surface of the cobbled streets, the team poured 8400 gallons of soda. I’m sure you must have stepped on slipped soda and noticed how sticky it gets. That’s exactly what the stunt team aimed to achieve. The sugar deposit left on the street after the soda dried made the surface sticky enough for stunt cars and motorcycles to perform mad stunts. It works similar to Trackbite resin coating applied to drag strips for more traction. Genius yet incredibly simple, right? 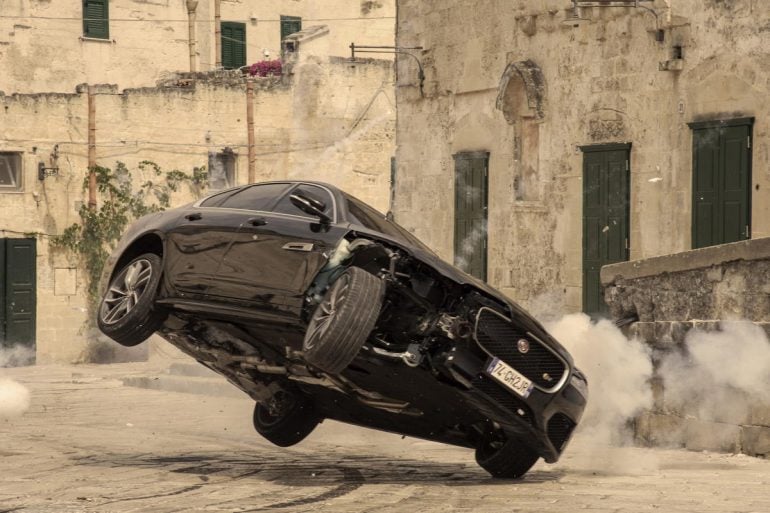 A total of 10 Aston Martin DB5 cars were used for the sequence, which included two real versions, while the rest were kitted-out lookalikes. To protect the historic buildings from damage, the production team constructed fake city walls in front of the real ones. British special effects guru Chris Corbould says 95 percent of the sequence was real, while CGI only provided 5% of the final touches.