Almost half a dozen superyachts owned by billionaire oligarchs closely linked to Russian President Vladimir Putin have been seized around the world ever since Russia invaded Ukraine. However, even the ones that are not on the EU’s stringent sanctions list are facing the consequences of the war. An explorer superyacht that belongs to Russian oligarch Vladimir Strzhalkovsky is being made to feel unwelcomed in Norway.

Named Ragnar after one of the greatest Viking warriors hasn’t helped the 68-meter superyacht either. The Russian-owned luxury vessel has been stuck at a dock in Norway as no one in the port is ready to sell fuel. The Malta-registered superyacht is sitting at a quay in Narvik, a port city in northern Norway, and is desperately in need of fuel to sail back to its homeport.
The Ragnar was built in the Netherlands and delivered in 2012 after being converted from a service ship. Things like its diesel-electric propulsion, ice-breaking propellers, and its robust equipment make it a perfect explorer vessel meant for adventurous winter getaways.
Its helideck can handle an Airbus EC145 helicopter, while its industrial crane can support a load of up to 10 tonnes.
However, it’s the vessel’s ultra-impressive fleet on tenders and toys, which includes a BigBo amphibious ATV, heli-skiing equipment, four See-Doos, four ski scooters, six Seabobs, a multipurpose island, and a giant slide.
“We find the discrimination against us, extremely unjust,” the yacht’s captain, Robert Lankester, wrote in a note. The captain pointed out that Strzhalkovsky is currently not on any sanctions list, neither does it have a Russian crew. However, the local suppliers have refused to sell fuel to the superyacht to demonstrate their support for Ukraine in the conflict.
Interestingly, the Ragnar was listed for sale exactly a year ago with an asking price of around $85 million. But it turns out that it couldn’t find buyers and still is owned by Strzhalkovsky. 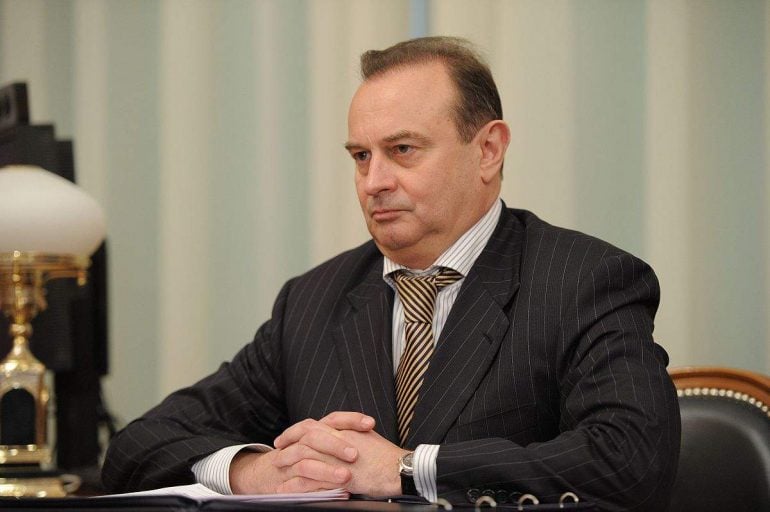 Who is Vladimir Strzhalkovsky
The Russian billionaire is a former KGB officer who has held top positions in the government and also in the metal industry. Despite being a close ally of Putin, the oligarch has managed to stay out of various sanctions lists that have targeted other Russian billionaires.