Land Rover has unveiled the final piece of its ‘Inspired by Britain’ jigsaw at the 2015 Montreal Auto Show, Canada. Third in a series of special edition models, the Range Rover Evoque ‘NW8′ special edition reflects the namesake North West London district’s postcode that has been at the heart of the city’s creative scene since the sixties. Limited to only 1,000 production models, the Range Rover Evoque NW8 draws influence from the famous Abbey road zebra crossing, the exterior receives a Fuji white color treatment with a contrasting Firenze red roof and mirror caps, while the red lettering on the bonnet and tailgate add to the car’s unique touches. 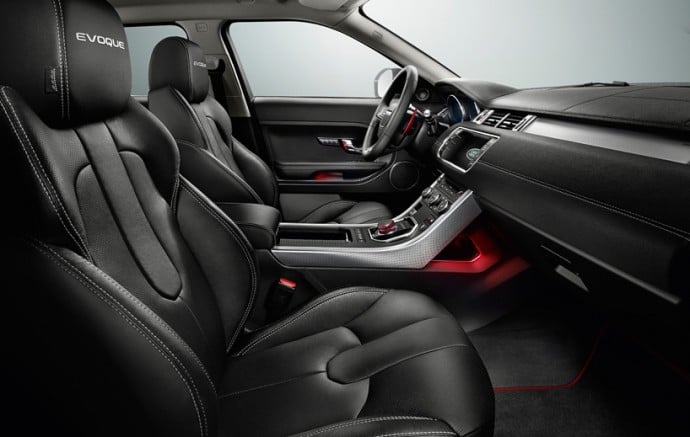 Additionally, darkened headlights and foglamps, clear rear lights and Santorini black wing vents and grill complete the updates made to the exterior design. On the inside, an equally bespoke interior complements the special treatment made to the exterior. The interior is available in two color schemes with crosswalk-inspired treadplates, seat tags and special key featuring distinctive motifs. The headrests are embroidered and the rotary driver selector, gearshift paddles and gearlever are finished in anodized red. “Our customers love to personalize their vehicles to reflect their own characters and the Evoque NW8 provides another opportunity for them to make a statement. Its bold combination of colors makes it the most individual of our ‘inspired by Britain’ special editions,” said Land Rover design director and chief creative officer, Gerry McGovern.