Remember the absolutely mad Rolls Royce 103EX concept car? The radical concept, also known by the name Vision Next 100 concept, was revealed back in 2016 to celebrate the British luxury automaker’s parent company BMW’s 100th anniversary. After spending three years touring around the world, the Rolls Royce 103EX electric vehicle study has finally returned to the automaker’s home in Goodwood, England. After being officially unveiled at London’s Roundhouse in 2016, the 103EX was showcased at Goodwood for a very short duration, after which it embarked on a global adventure and made appearances at various customer and media events across the world. The futuristic concept car arrived at the Rolls Royce’s headquarters onboard its own bespoke transporter along with the Experimental Vehicle Team that maintained the EV for the last three years.


“We are delighted to welcome 103EX home to Goodwood. After almost four years on international duties, we felt it was time for the experimental model to return home. It is a chance for those who worked on the project to relive some great memories, and for people who have joined us more recently to discover one of the most important cars we have ever built,” said Torsten Müller-Ötvös, CEO of Rolls-Royce Motor Cars. 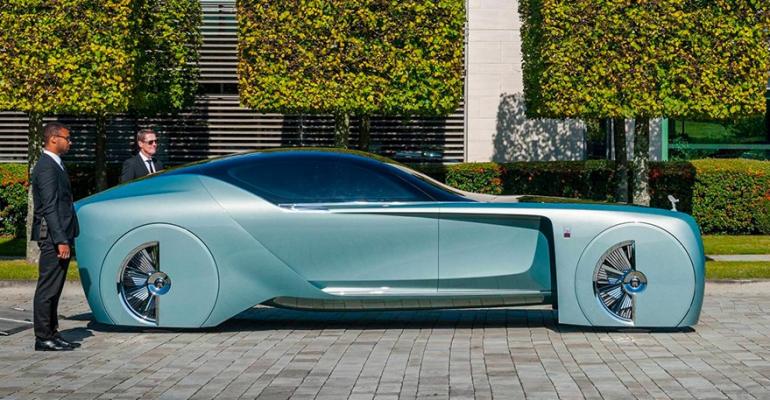 The 103EX gives a peek into Rolls Royce’s vision for a fully autonomous coach-built luxury vehicle, featuring a hand-built chassis made from the most advanced materials. The autonomous driving feature works fulltime and there’s no physical steering wheel inside the car. Instead, the cabin has been designed to transport passengers in utmost luxury. Every function of the car, including driving, is taken care of by “Eleanor” – a virtual assistant and chauffeur that interacts with the passengers. An in-depth video was posted on YouTube by social media influencer Supercar Blondie, which covers all the cool functions of the concept.