Behold the Rolls-Royce Boat Tail, a properly coachbuilt nautical-themed tourer that is priced at a whopping $28 million, making it the most expensive new car in history. The ultra-opulent limousine follows on the $13 million Rolls-Royce Sweptail from 2017 which is said to have encouraged Rolls-Royce to create its exclusive Coachbuild division to cater to its weathly patrons who demand something truly unique. However, unlike the Sweptail which was a one-off, Rolls-Royce will make a series of three Boat Tails personalized exclusively for its customers. The one that you see here is the first of them. Here are 7 amazing facts about the new Rolls-Royce Boat Tail that clearly justify its $28 million price tag. 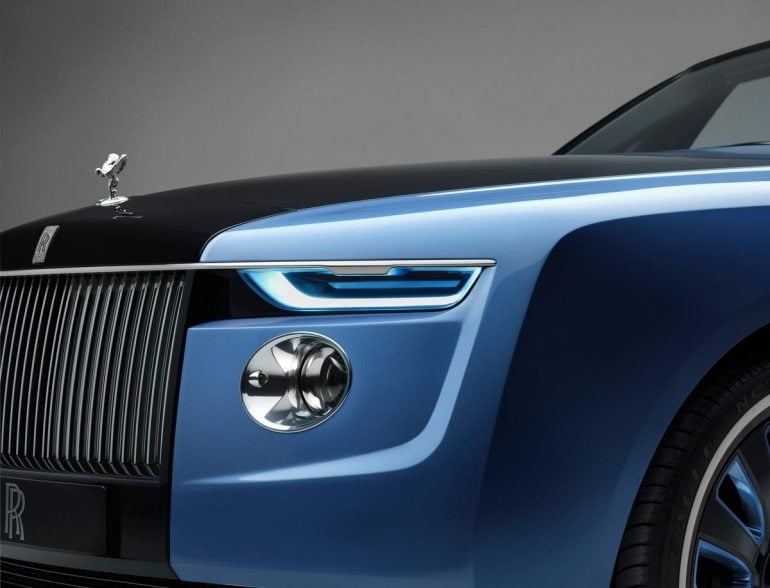 7. The first Rolls-Royce Boat Tail example has been commissioned by a mystery man and his wife from the US. Rolls-Royce is notoriously tight-lipped about the details of its customers of exclusive builds – something we saw with the Sweptail, as well. However, the couple is believed to be in the music industry and there are plenty of signs that indicate the most expensive new car in history might have been commissioned by none other than Beyoncé and Jay-Z. Although, this has not been officially confirmed. Rolls-Royce has however said that the power couple that commissioned also owns a fully-restored 1932 Rolls-Royce Boat Tail. 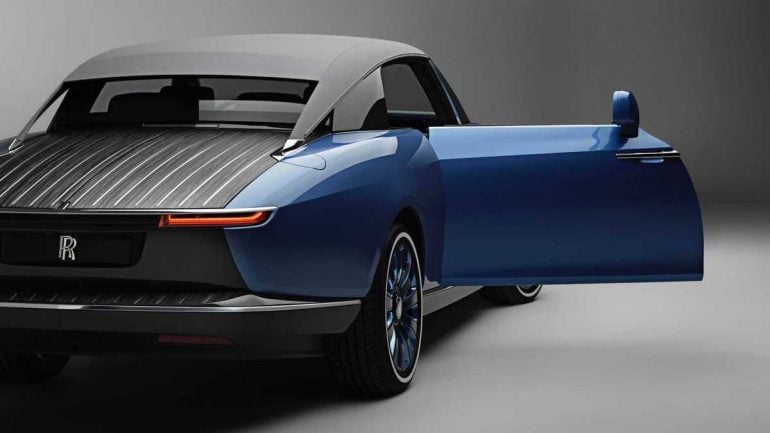 6. The bespoke limousine is inspired by J-Class yachts and ‘Boat Tail’ Rolls-Royces from the 1920s and ‘30s. Back then, coachbuilders directly transplanted “the hull forms of sailing boats” onto rolling chassis built by Rolls-Royce. However, things are a lot more complicated now. The British luxury automaker reportedly spent 4 years developing the ultra-decadent tourer and the Boat Tail underwent all the same dynamic testing as the regular models. It is also the first model to be created by the automaker’s Coachbuild arm. 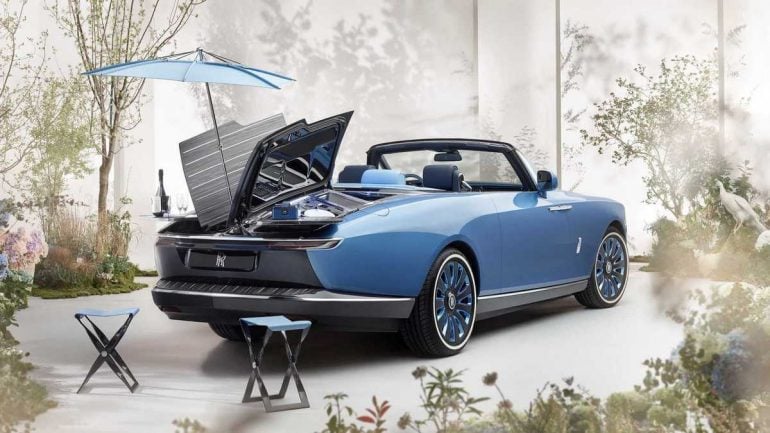 5. The Boat Tail is based on the same basic platform as the Phantom and uses the company’s existing aluminum architecture. However, Rolls-Royce says that it’s not a regular model with a lot of bespoke extras and additional features but a brand new car. The automaker took eight months to adapt the chassis to the proportions of the Boat Tail that measures 5.8 meters. It also gets 1,813 new and totally bespoke parts. 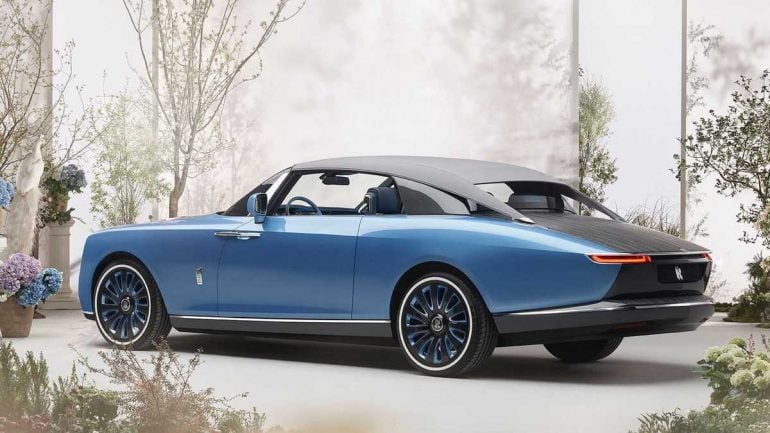 4. The aesthetics of the Boat Tail is completely bespoke, although it prominently retains Rolls-Royce’s design DNA. The exterior is finished in a special shade of blue – ‘the client’s favorite color’ – with embedded metallic and crystal flakes to catch the light which is contrasted with a hand-painted Azur hood that transitions from blue to black. This two-tone paint scheme is mirrored inside the cabin as well. The traditional Rolls-Royce grille stainless-steel finish has also been replaced by a painted pantheon grille. 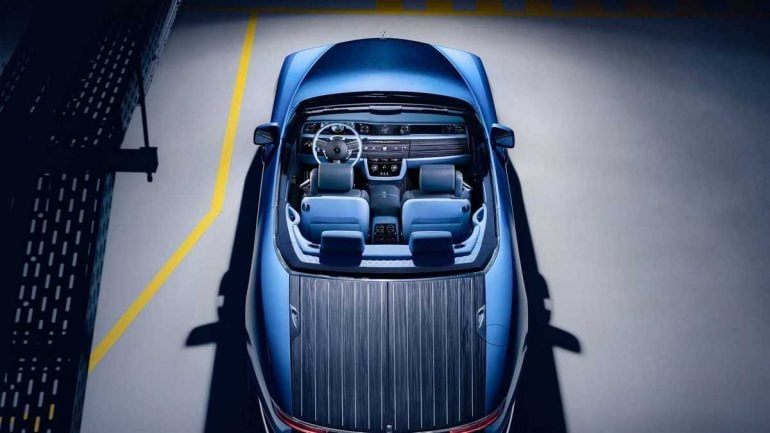 3. The cabin is just as opulent and bespoke as the best of the car. The interior is upholstered in blemish-free leather in a shade of blue with a ‘light metallic sheen’ and contrasting black. The leather is sourced from hides of ‘stress-free’ Alpine cows in Bavaria. The dashboard features black Caleidolegno wood veneer, while the instrument dials are adorned with decorative Guilloche patterns usually found in high-end watches. The Boat Tail is an open-top tourer, but it is supplied with a tonneau cover for “static transitory shelter” that appears to be manually operated. 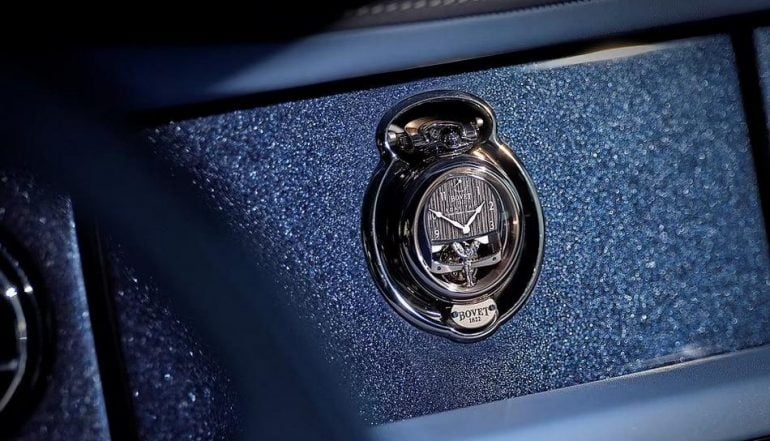 2. Rolls-Royce collaborated with Swiss watchmaker Bovet to create two bespoke reversible ‘His & Hers’ two-sided timepieces. Engineered, designed, and developed in parallel with the Boat Tail, Rolls-Royce describes it as an “accomplishment never before realized in either industry.” Either of the two watches can be taken off the owner’s wrist and inserted into a dedicated slot of the dashboard to serve as the Boat Tail clock. There’s also a special tray compartment to store the other watch when not in use. 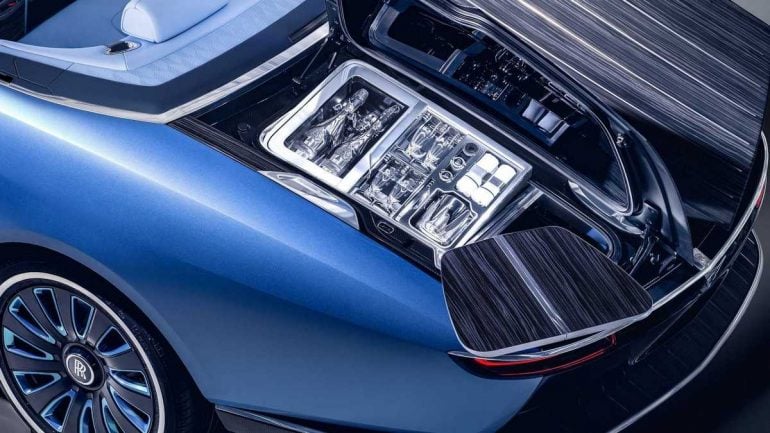 1. This brings us to the highlight of the Rolls-Royce Boat Tail – the “hosting suite”. The tail of the cabriolet that dramatically slopes downwards might remind you of the rear deck of luxury yachts. At the press of a button, the aft-deck of the Boat Tail opens up like buttery wings to reveal the intricate hosting suite and it is controlled by five individual ECUs. 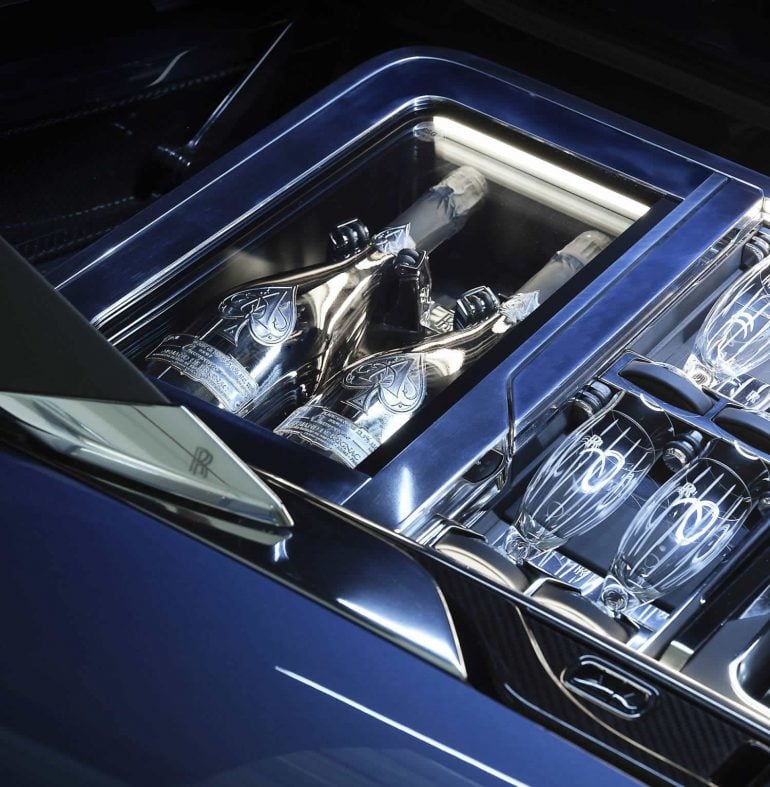 The left side houses a dual champagne cooler that was specifically designed to fit bottles of the owner’s favorite Armand de Brignac vintage, along with space for four champagne flutes, napkins, and other bits. On the other side is a bespoke alfresco picnic and cuisine section with temperature-controlled food warmers and cutlery made by Christofle of Paris and engraved with ‘Boat Tail’. Two pop-out cocktail tables elegantly rotate out when the rear deck is opened. Additionally, there are two stools designed by Rolls-Royce and created by Italian furniture maker Promemoria. That’s not all. The party piece of the Boat Tail is a parasol that hides inside the rear deck and springs up from the centerline on demand. Rolls-Royce even tested it in the wind tunnel.