As a part of its pre-launch publicity drive, British luxury carmaker Rolls-Royce has released the latest installment of the Cullinan video teaser series. And this time, the upcoming luxury SUV, or what Rolls-Royce is calling an All-Terrain High-Sided Bodied Vehicle, can be seen ripping across the dunes outside of Dubai. The teaser clip begins with a Cullinan prototype hidden under camouflage wrap leaving the Dubai cityscape behind, and heading deep into the desert. Giving us a glimpse of its capability off the road, the luxury SUV can be seen jumping over the dunes, drifting and doing this we safely presume no Cullinan owner will ever try. 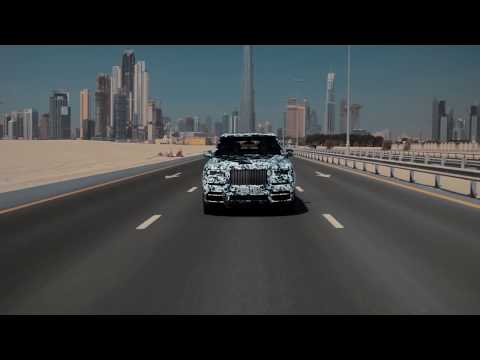 With the launch date approaching fast, the Goodwood-based marque has now started accepting expressions of interest along with the option to put down a deposit on what will be the most expensive SUV in the world once it hits the market. According to the details leaked ahead of its launch, the Cullinan will borrow some of its underpinnings from the new Phantom. What that means is the luxury SUV will be powered by the same 6.75-liter twin-turbo V12. Ahead of its launch later this year, the Cullinan will continue to be tested across different terrains and environments.

Tags from the story
Dubai, Rolls-Royce