The run of six special edition Les Légendes de Bugatti Veyrons will come to its conclusion this month as the automaker is preparing to take the covers off its final version of the series. Saving the best for last, the sixth and final special edition is dedicated to the founder of the company – Ettore Bugatti. It’s been a whole year since Bugatti introduced the first Les Legends Bugatti Veyron at Pebble Beach Concours d’Elegance and the same venue with the same spot will be used to unveil the final version. Ettore Bugatti, the founder and namesake of the company, played the leading role in the creation of many of the brand’s most iconic vehicles, including the Type 57 SC Atlantic and the Type 41 Royale and is an iconic figure in the automotive history. 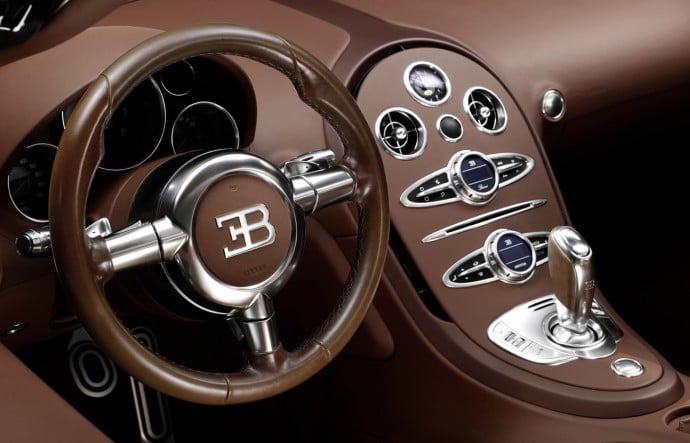 Like all the other Les Legends cars, the Veyron built to honor Ettore Bugatti is based on the 16.4 Grand Sport Vitesse. Which means it’s powered by a 1,184hp 8-liter W16 engine which produces 1,500 Nm (1,106 lb-ft) of torque. It is able to sprint from 0 to 100 km/h (62 mph) in 2.6 seconds, the Vitesse has a maximum speed of 408.84 km/h (254 mph) with the roof down making it the fastest roadster every built. As for the special treatments, the exterior is decked out in eye-catching combination of hand-polished aluminum and blue carbon fiber. The interior is similarly decked out with blue carbon and two types of leather, along with all manner of special badges, emblems and plaques. Only three Ettore Bugatti Legend models will be built, each priced at €2.35 million ($3.14 million. Bugatti will display all six limited series models for the first time on August 15 at “The Quail: A Motorsports Gathering” and on August 17 at the “Pebble Beach Concours d’Elegance”.