Earlier this year, Rolls-Royce finally launched its first ever SUV called the Cullinan; and despite its uber-luxurious credentials, Rolls-Royce claims that the Cullinan is just as good off the road as it is on it. In fact, the British luxury carmaker came up with a series of videos ahead of its official debut giving us a peak into the car’s off-road capabilities. However, it’s no monster truck with giant wheels that can go dune bashing, mud sloshing and intimidating everything else on the road. That exactly might be the reason why someone decided to create a Rolls-Royce monster truck. A low-resolution video has emerged online that shows a massive Rolls-Royce monster truck rolling down what appears like an exit of an office complex like it’s no big deal. 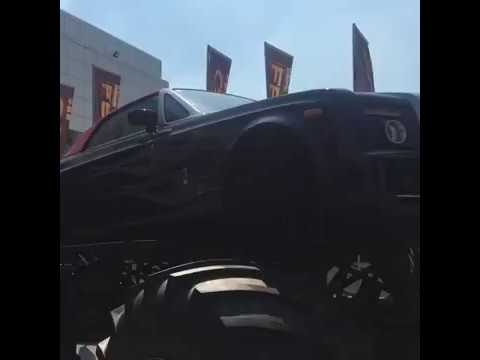 The super-sized contraption appears to be built out of a real Rolls-Royce Phantom Drophead Coupe, instead of a replica, which has been put on stilts. There is absolutely no information available on this Mad Max-style creation and the bad quality video that’s only a few seconds long doesn’t give away much either. But you may be surprised that it’s not the first Rolls-Royce monster truck conversion. Back in 2011, someone in Dubai had put an old Rolls-Royce Silver Shadow on stilts.