An RV is often called a poor man’s (relatively poor) yacht. But if you can afford a yacht, you can definitely afford a well-appointed luxury RV. The only little caveat is you’ll have to choose between sailing the open ocean or cruising on the winding roads of the beautiful countryside. But what if I tell you that you can do both! The Terra Wind Amphibious Motorhome is the perfect recreational vehicle for a great vacation which blends the idea of a luxury RV and a yacht/boathouse. The amphibious vehicle is the brainchild of John Giljam and his wife Julie – founders of the company Cool Amphibious Manufacturers International (CAMI). 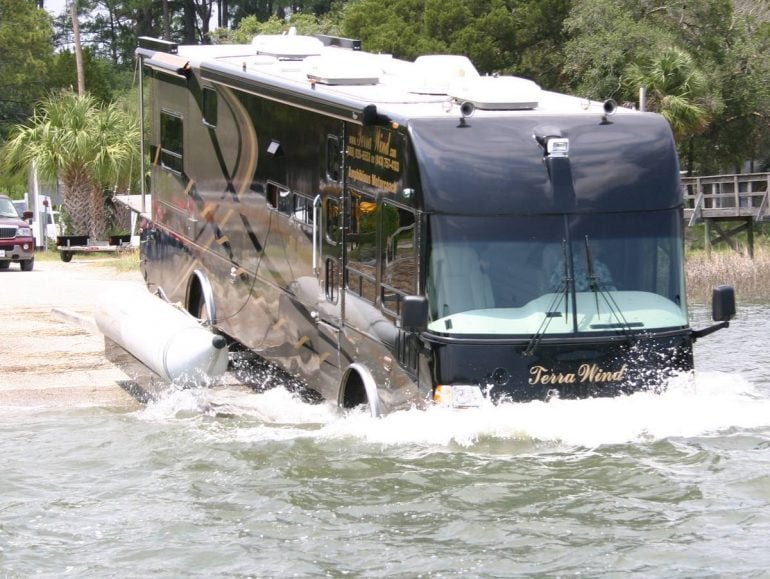 The South Carolina-based couple started off by offering ski jet rides and tours on the river in Bluffton. That’s where John got the idea to build an amphibious vehicle that will be able to carry tourists on land as well as water. 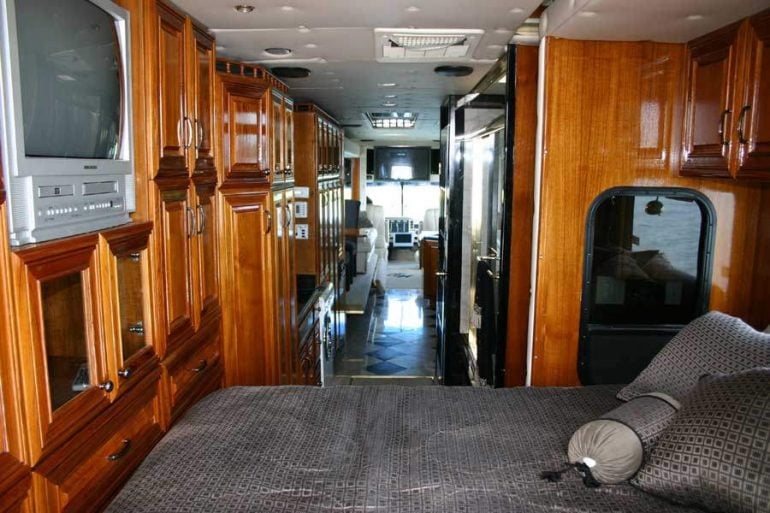 Their company has been building amphibious vehicles for over two decades now and the fleet includes builds like an amphibious sports car and an amphibious search and rescue vehicle. However, the amphibious RV is the most challenging of them to build. 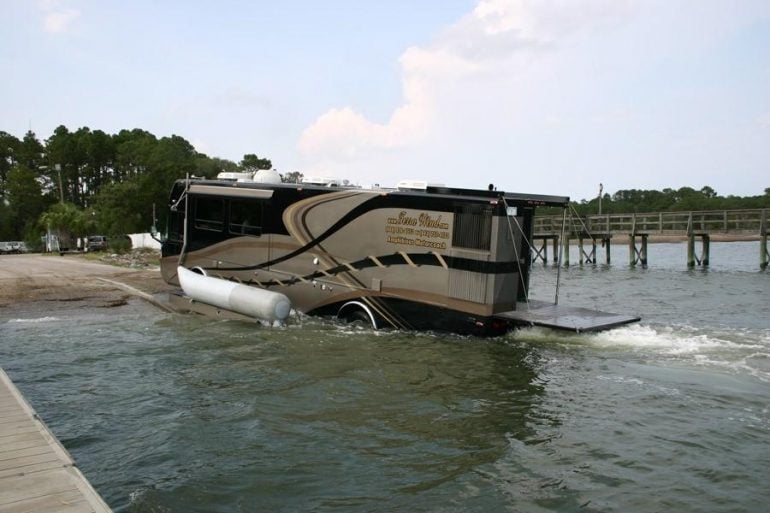 The duo first created the Hydra Terra amphibious bus in 2002 and it had a 49-passenger capacity. Two years later, they decided to build an amphibious RV, which was named Terra Wind. Over the last two decades, their RV has been in new quite often; however, its media attention has tapered off over the last few years. The Terra Wind is a massive Class-A RV that measures 42.5 feet long, 102 inches wide, and has a GVWR of 33,000 pounds. 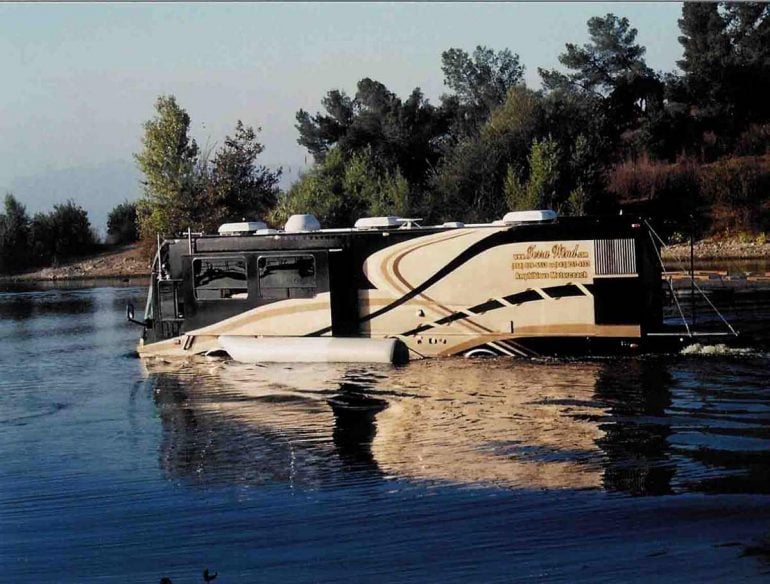 The RV is powered by a Caterpillar 3126E turbocharged 330-hp diesel engine. It uses an automatic transmission for driving on the road and a marine gearbox for operating it on water. The Terra Wind claims to have a top speed of about 80 mph on land and eight knots on water. 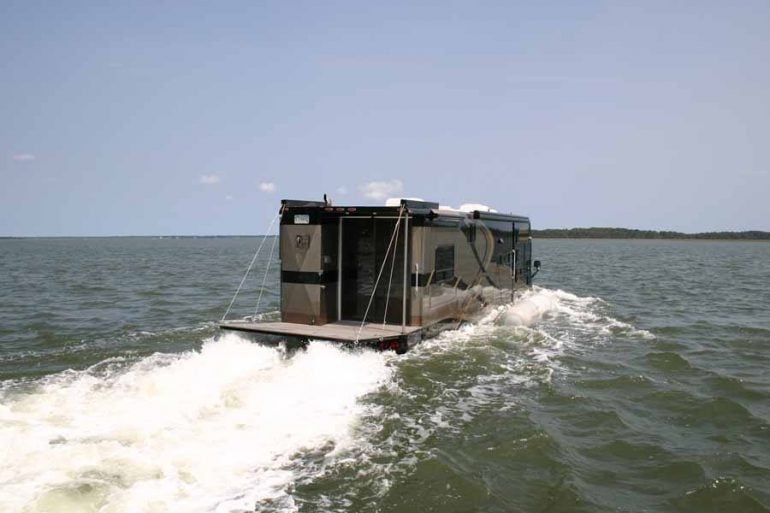 There’s a pair of 3.9-meter pontoons that enhance stability on water and the bodywork is waterproof. But there’s an emergency pump in case of flooding. The Terra Wind otherwise is a typical luxury RV with all amenities. The interior has the feel of a yacht, as well. It gets marble tile floors, teak cabinets, leather upholstery, and granite countertops. The RV also has a Jacuzzi on board. The Terra Wind starts at $850,000 and a well-appointed version can cost around $1.2 million. 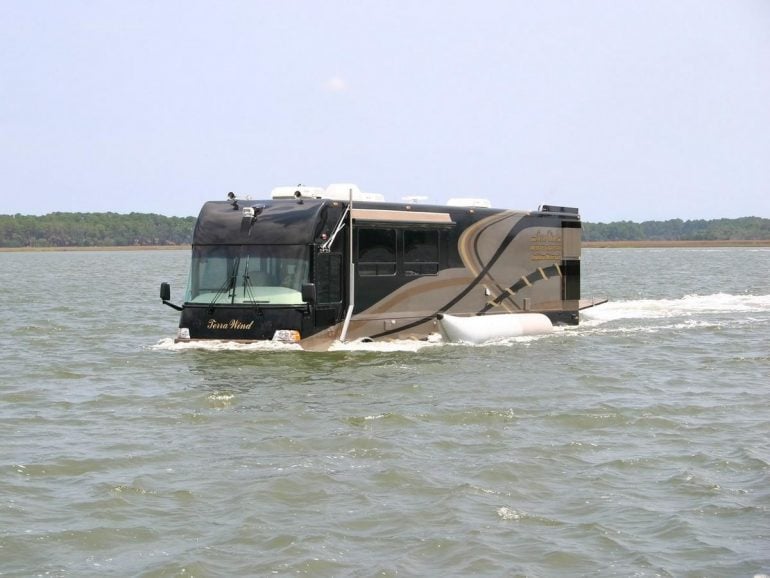 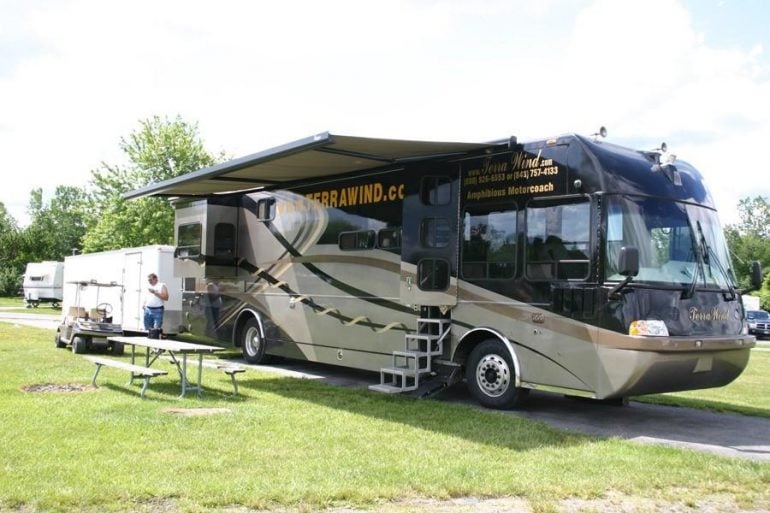 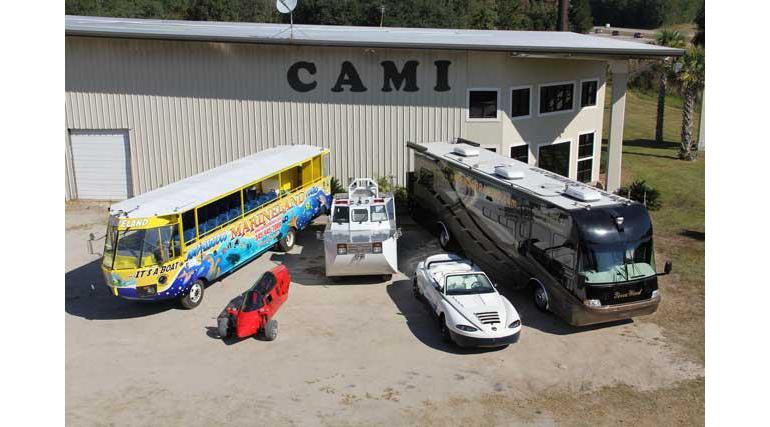 Tags from the story
Motor-Home