Billionaires love their toys. While these rich boy toys are uber-expensive, the cost of playing with them is even higher. Superyachts turned into quite the peach for billionaires in 2021. With more than 1200 multi-million dollar superyacht orders, it seemed like these floating mansions are genuinely the new status symbol. Instead of buying superyachts by blindly following the rich rat race, Greek shipping tycoon Thanasis Laskaridis and his environmentalist wife, Evi Lazou, show the world the ideal way to enjoy one’s luxurious yacht without forgetting their environmental responsibility. According to ‘The Guardian’, superyachts are heavy polluters. A superyacht with a permanent crew, helicopter pad, submarines, and pools has been estimated to emit about 7,020 tons of carbon dioxide a year. 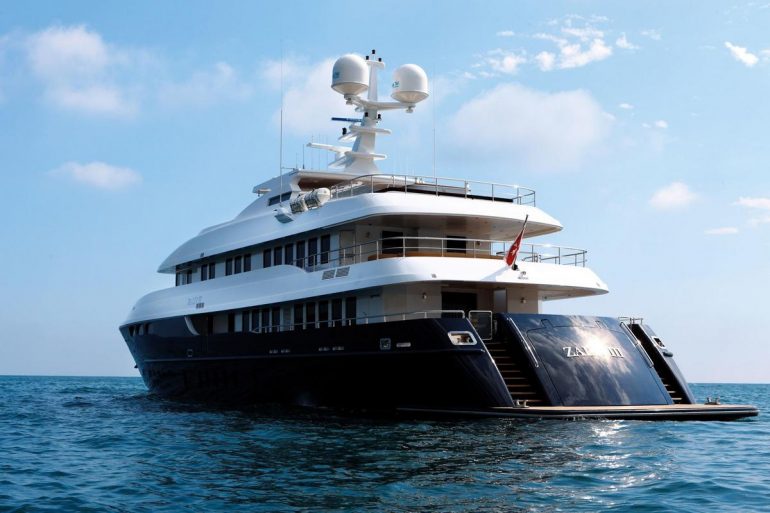 This staggeringly high number is more than 1,500 times higher than a typical family car. The swanky Londoners who live the good life aboard their well-equipped Zaliv III superyacht understand the cost of living this lavish life. They ensure they give back to the environment with the help of a second boat called Typhoon. Initially a giant oil platform supply vessel, Typhoon is used as a research ship and beach cleanups. Let’s learn more about the superyacht, the cleanup vessel, and the couple that’s clearly got it right:


The zealous Zaliv III superyacht:
For owner Evi Lazou, the Zaliv III superyacht is the best way to make the most of the unending coastline in the Mediterranean, with 6,000 beautiful islands to explore. The almost 170-feet ship was built in 2011 by the renowned Italian shipyard Mondomarine. There is no dearth of entertainment and utmost luxury onboard the posh Zaliv III.
With their base is in London, the Greek couple rejuvinates aboard the Zaliv III superyacht, making most of the amenities like a Jacuzzi with a bar and barbecue on the sundeck to a gym and even a formal dining table that converts into a giant backgammon board. Lazou shared with Boat International, “Each one of us has a favorite toy, and Chris, the cinematographer of the family, always makes sure we have one proper, edited video of each summer cruise,” she says.
“We explore remote beaches; have impromptu barbecues and picnics and occasionally bike or hike inland, discovering the unique beauties of the islands – their picturesque villages, monasteries, archaeological sites, and trekking paths. The elegant Zaliv III superyacht allows its owners to make the most of a Greek summer experience, making it even more comfortable than the home itself. There are six cabins, an onboard gym, a steam bath, and a spa pool. The time spent on the yacht is now even more memorable, thanks to the splendid work of SMK Interiors by Silvina Macipe Krontiras.
For Lazou, a simple addition of a rug and coffee-table arrangement on the main deck has now turned into her favorite spot. “My favorite part of Zaliv III is the flybridge,” she says. “It’s perfect for enjoying breezy evenings under the stars with good company, nice music, and fresh fish caught that day by local fishermen.”
The yacht looks elegant and inviting with soothing neutral shades and natural materials that stand bright against the natural setting. It’s the yacht’s enormous array of water toys that deserve a special mention and also keeps the affluent family entertained while at sea.
“I was always a fan of sandy beaches with clear turquoise waters and rather nervous of dark, deep seas, but since I met Thanasis and started cruising on the yacht, I’ve trained myself to let go of that fear and explore parts of the deep sea that I would never have dreamt of before.” Their toys include three jet skis, an electric surfboard, and Seabobs are on hand to beckon guests into the water.
The family has put the luxurious superyacht for sale for $25.7 million and will soon shop for their next yacht. Currently, they are focusing on giving back to the environment and protecting the sea with the help of their other ship MV Typhoon.
The Cleanup vessel, Typhoon:
Lazou is Chairman of the A.C. Laskaridis Charitable Foundation founded by her husband, Greek shipowner and businessman Thanasis Laskaridis. This 240 feet vessel was purchased in 2018 to host researchers and enable beach cleanups. Typhoon got refitted with a dynamic positioning system, firefighting, and oil-spillage-cleaning equipment at the Astander shipyard in northern Spain. After hitting Greek shores in July 2019, the ship has covered more than 800 beaches and collected 80,000 kilograms of litter. Typhoon is a valuable contributor to the archaeological research at the famous Antikythera Shipwreck.
Typhoon is an active and imperative tool focused on conserving the Greek coastline owing to its refit of the dynamic positioning system, The vessel can coast over any specific point of the seabed. It serves as a floating base for divers over the ancient shipwreck. Daily, ten cleaners are employed to carry out beach cleanups by the Aikaterini Laskaridis Foundation. 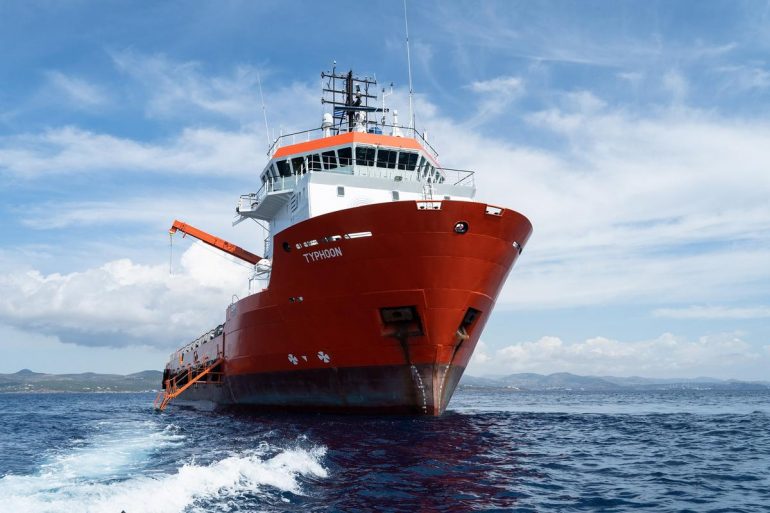 Typhoon hordes several landing craft on its open deck. With these instruments, the divers are deployed to the most remote and inaccessible areas of the Greek coastline.


The environmentalists Thanasis Laskaridis and Evi Lazou
Thanasis Laskaridis, president and CEO of Lavinia Corporation, has always been benevolent. He actively supports cultural and educational projects in Greece with his wife, Evi. Among the long list of charitable endeavors are the Hellenic Coast Guard, the Greek navy, and, more recently, the addition of MV Typhoon as part of the A.C. Laskaridis Charitable Foundation.
This special-purpose ship is positioned in the Greek seas by the foundation whose Chairman is Laskaridis wife, Lazou. Typhoon single-handedly manages a large-scale cleanup of the coastline and tackles in-water marine pollution. Evi is also the founding partner and Chairman of the board of The People’s Trust, which delivers micro-funding to start-ups and small, existing businesses in Greece.
Tags from the story
Superyacht