It is hard to believe that in the last ten odd years, electric cars have gone from being boring, crappy machines only used by the likes of celebs and environmentalists to something so fast that they seem to bend the laws of physics. The future of mobility is electric, which became evident while curating the list for the upcoming fossil-fuel-powered supercars – most manufacturers have stopped investing money to develop new IC-engine cars. So we decided to have a look at all the exciting pure-electric supercars on the horizon. Here are nine of them: 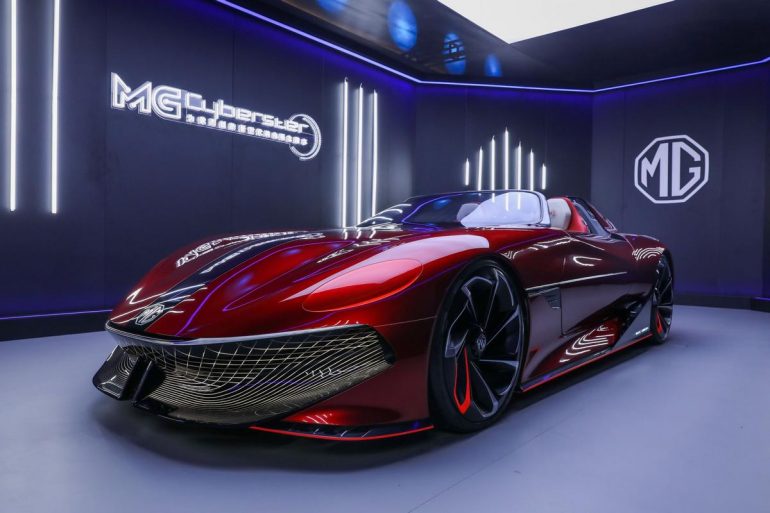 9. MG Cyberster
When – There is no official confirmation from MG, but it is unlikely to arrive before 2025
How much – Cyberster is still a concept, so the company has not revealed any info on the pricing.
At the 2021 Shanghai motor show, MG showcased an exciting electric sports car concept that looked like one of those show cars that never make it to production. However, the marque owned by Chinese state-owned company SAIC Motor later announced that it has received ‘more than 5000’ registrations for the Cyberster roadster and plans to put it into production. MG made its name by building quintessentially British open two-seater sports cars in the past, and the Cyberster was conceptualized to recall the brand’s roots.


Described as the ‘vision of the future,’ the futuristic roadster draws inspiration from the MG B Roadster from the 1960s. The Cyberster concept was showcased with many over-the-top features and design elements that we are sure won’t find their place in the production model. Still, it indeed looks wicked enough to grab our attention.

The only figures revealed by the Chinese-owned manufacturer include a range of 497 miles and a 0-62mph time of less than 3.0sec. But if MG builds the Cyberster, it will be the first proper supercar to come from China. 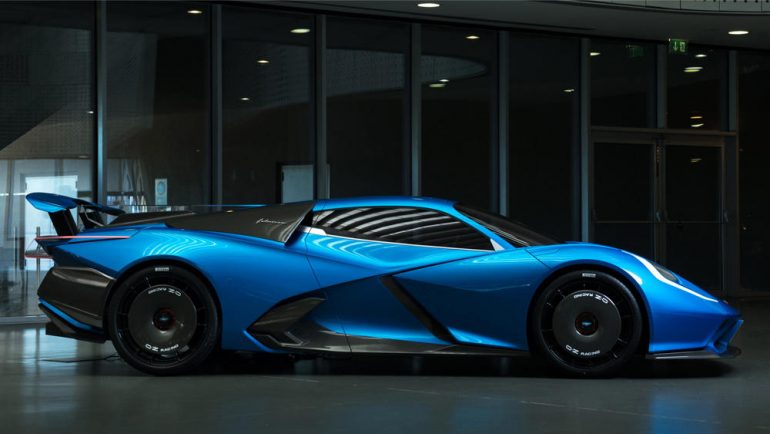 8. Estrema Fulminea
When – Automobili Estrema has said the deliveries would begin at the end of 2023. Optimistic!
How much – roughly $2.3 million
Is this another one of those whacky concepts that never make it to the production floor, or will the electric hypercar with a name you might have never heard before turn the whole electric supercar game upside down? Well, we don’t know. However, Estrema Fulminea’s stunning design and impressive specs got us praying that it sees the light of day. Automobili Estrema is a new Italian brand that aims to make its mark in the EV industry. The company recently revealed the Fulminea electric hypercar in its concept form at the Turin Automobile Museum. 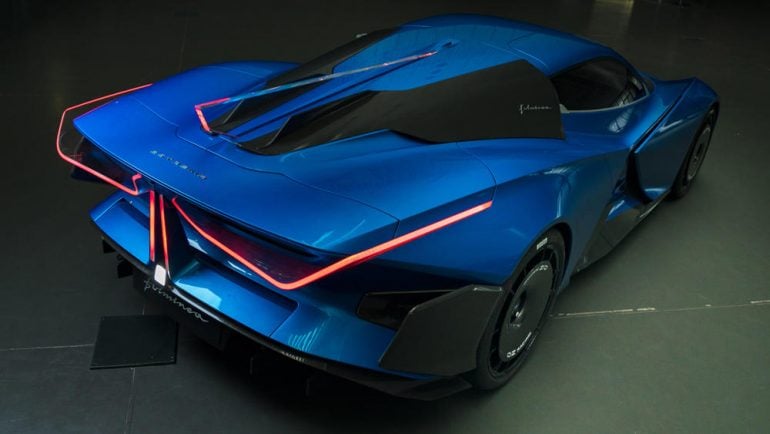 The Italian automaker says the electric hypercar will come with a ‘hybrid’ battery pack consisting of ultra-capacitors and solid-state cells that will prove to be a gamechanger. Estrema claims the hypercar will weigh close to 3,306 lbs, which is ultra-light compared to other EVs. It will be powered by four electric motors mounted at each wheel to produce a combined output of 2040hp. Result? It will be capable of a 0-62mph time of around 2.0sec, 0-200mph in less than 10.0sec, and a top speed of 217mph. Mad, right? 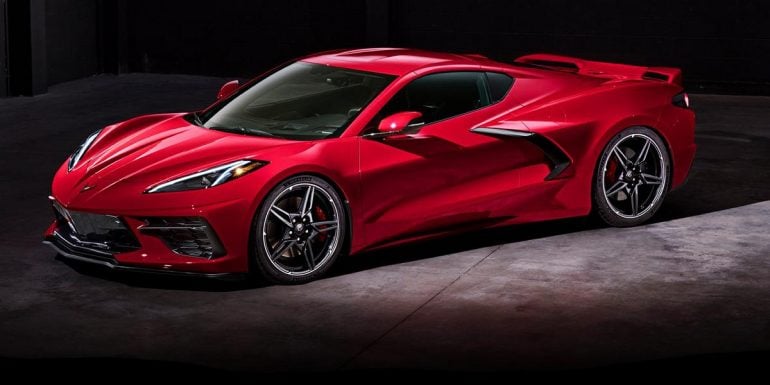 7. Chevrolet Corvette EV
When – Some reports suggest it might arrive as soon as 2023. But we doubt it’s possible.
How much – There’s no information on the pricing, but the electric Hummer has given us enough reasons to believe that the E-Ray could be one of the most affordable electric supercars. Maybe, below $200,000.
Corvette is, without a doubt, one of the most storied, cherished nameplates for GM. In 2019, the iconic sports car underwent the most significant redesign in its history, spanning almost 70 years – the ‘Vette had its heart relocated from the front to the middle of the chassis. The mid-engine Corvette C8 is such a massive success for GM that the American automaker is having a hard time meeting the demand. And we are eagerly waiting for GM to release the souped-up Z06 variant. However, GM has another trick hiding up its sleeve – an electric Corvette.


Last year, GM moved its engineers working on the Chevy Corvette to its EV team, which immediately got us interested in what was cooking behind the doors. Multiple reports have suggested that the manufacturer is developing an electric Corvette that might be named E-Ray, which could be a part of GM’s plans to transition to an all-electric future. That’s all the details we have now, and we don’t intend to speculate. But we can only imagine how amazing a battery-electric Corvette will be! 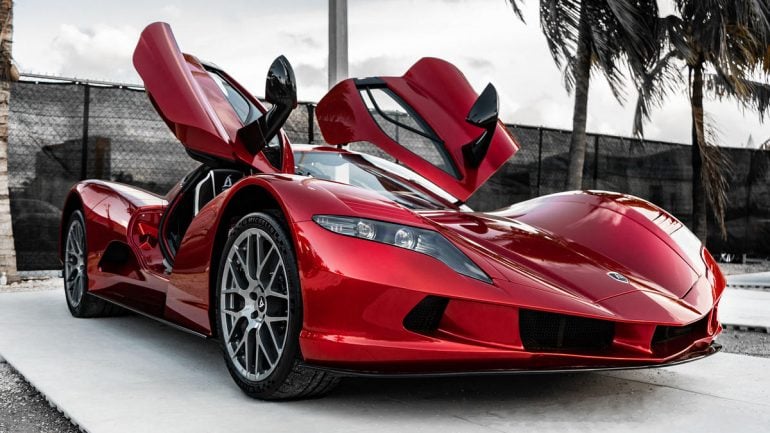 6. Aspark Owl
When – Aspark started accepting orders at the end of 2020, and the deliveries should begin by the end of this year
How much – starts at $3.50 million
Back in 2018, a video of a carbon-clad electric hypercar rocketing from zero to 60mph in an unbelievable 1.9 seconds broke the internet. And it did it in a tiny car park instead of a grippy dragstrip, which makes it even more impressive. Yes, you read that right – a car park! The wild-looking hypercar is named Aspark Owl and is from the Land of the Rising Sun. And in case you think the 1.9 seconds 0-60mph time isn’t that impressive anymore as the Tesla Model S Plaid is almost as quick, the Japanese manufacturer has announced that the production variant will be even faster. How quick, you ask? Well, Aspark claims the Owl can accelerate from zero to 60mph in an ungodly 1.69 seconds, making it the fastest in the world. 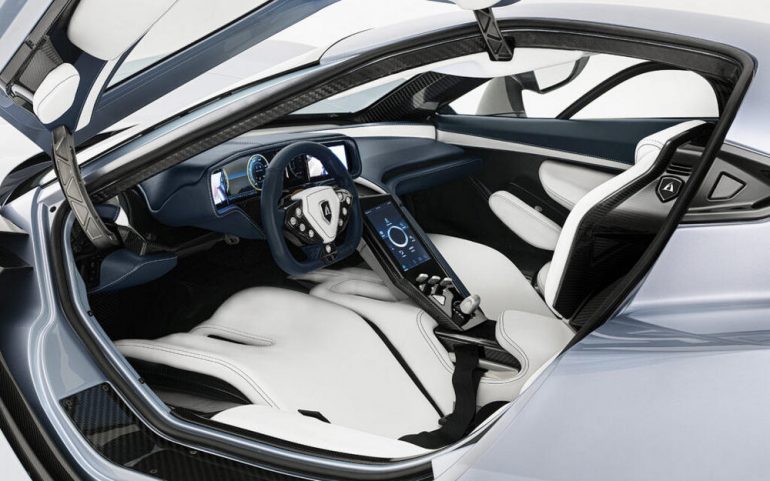 The claimed top speed is 249 mph, while the sprint from a stop to 186 mph requires a mere 10.6 seconds. The Japanese electric hypercar has four electric motors with a cumulative output of 1,985 horsepower and 1,475 pound-feet of torque, which draw power from a relatively small 64-kilowatt-hour lithium-ion battery pack. However, Aspark says it might upgrade the Owl with a bigger battery sometime in the future. 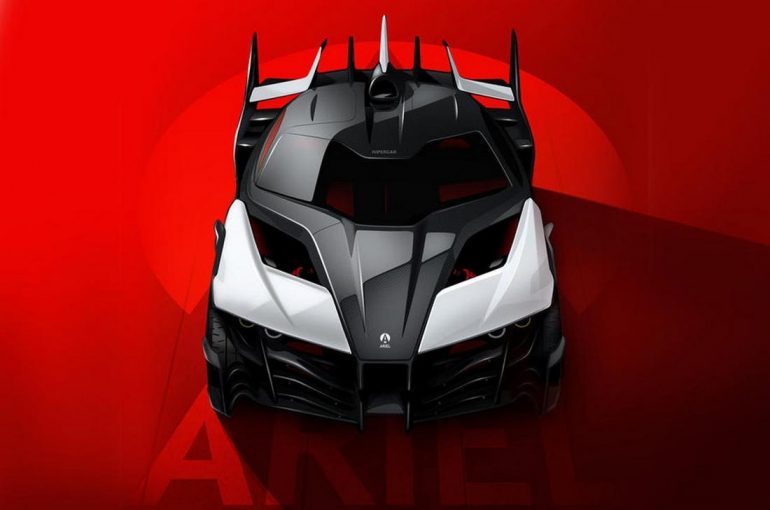 5. Ariel P40
When – Ariel has already missed the 2020 deadline, but we hope it arrives before 2023
How much – There’s no information on the pricing, but we’re sure it’ll be the most expensive product in the company’s portfolio. We expect it to be north of $500,000
British company Ariel is known for making some of the craziest four-wheeled machines like the Atom and Nomad. However, several news reports back in 2017 suggested that the Somerset-based manufacturer was working on a hypercar with an electric powertrain that could make the Atom look like a tamed machine. Over the last four years, we have heard very little of this secretive project, although the electric hypercar codenamed P40 was destined to hit the market by 2020. 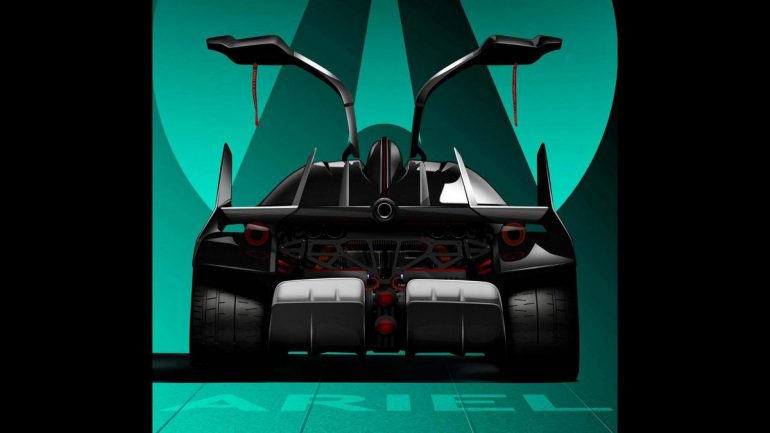 Let’s presume the P40 has not been canceled but merely delayed, and we’re ready to wait for as long as it takes; after all, we are more than aware of the amount of insanity an electric Ariel sports car can pack. The UK company has previously hinted that the P40 might be capable of going from zero to 100mph in a face-warping time of 3.8 seconds. The P40 will also run 0-60 mph in 2.4 seconds and have a top speed of 160mph. There’ll be four electric motors powering the hypercar with a combined output of 1200hp. Ariel might add a turbine range extender, but the details are sketchy at the moment. 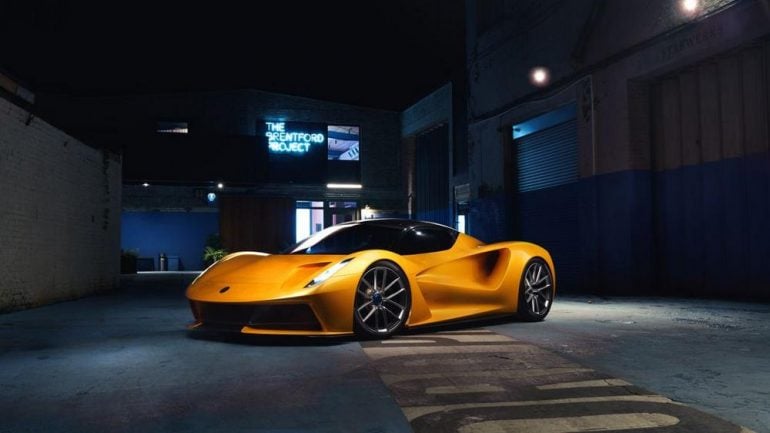 4. Lotus Evija
When – end of 2021
How much – about $2.3 million
Fabled British carmaker Lotus is known for making driver-focused sports cars that are light and nimble but not very powerful. However, it surprised everyone in 2019 by revealing a limited-production electric hypercar named Evija (pronounced “E-vi-ya”) claimed to pack a lot more horsepower than just about any production car with an internal combustion engine, including the Bugatti Chiron. There are quite a few firsts as well. The Evija is the first hypercar by Lotus, the company’s first-ever EV, and the first car fully developed since Lotus was bought by Chinese automotive group Geely. 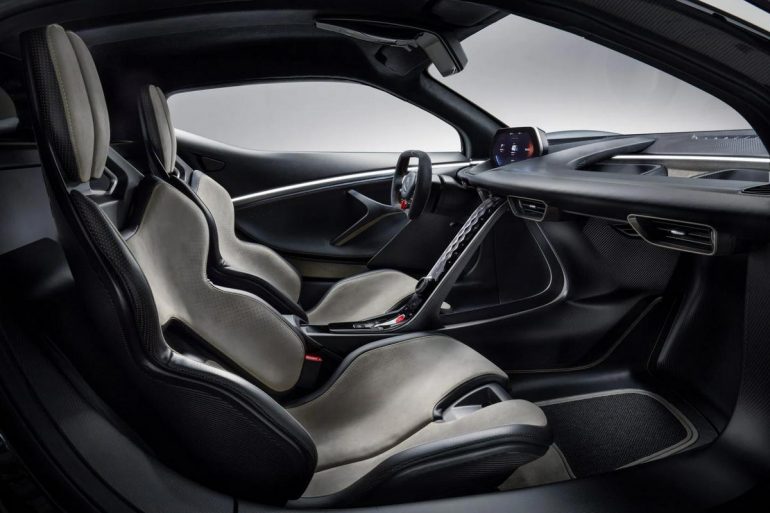 Not only is the electric hypercar’s styling absolutely crazy, but the specs and performance figures will also blow your mind. The Evija has four electric motors mounted on each individual wheel, and they produce a combined output of 1972 horsepower and 1254 lb-ft of torque. Lotus claims the Evija can sprint from zero to 62mph in less than 3 seconds and reach a top speed over 200mph. 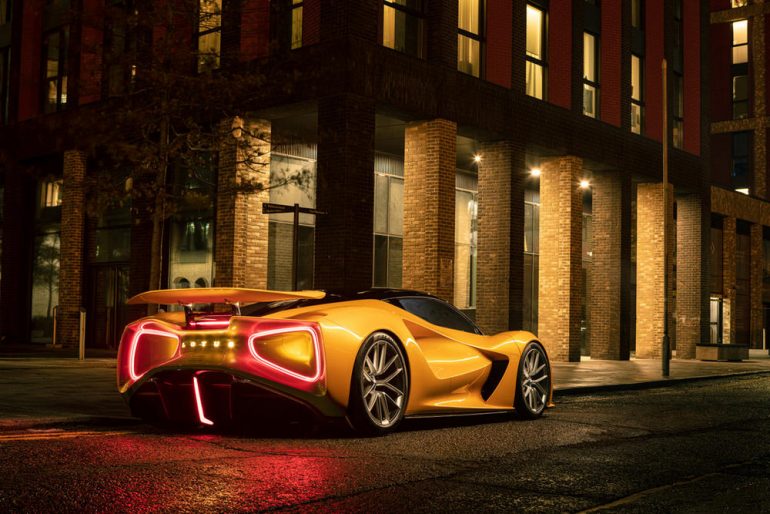 Additionally, Lotus says the car’s battery pack takes just 12 minutes for an 80 percent charge, and a full charge takes a mere 18 minutes. Sadly, the Evija isn’t street legal in the US. 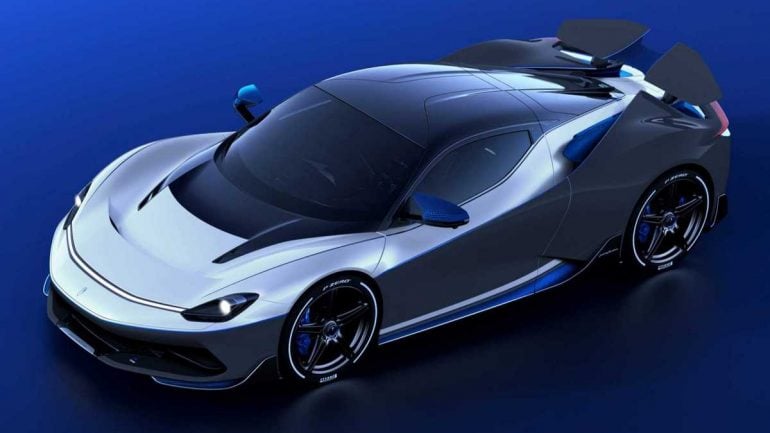 3. Pininfarina Battista
When – Automobili Pininfarina’s parent company, Mahindra & Mahindra, recently announced the deliveries would begin in late 2021
How much – about $2.5 million
Legendary Italian design house Pininfarina’s founder Battista Pininfarina had a dream to make their own cars. The goal was finally fulfilled in 2019 when Automobili Pininfarina revealed its first-ever car, the Battista (named after its founder). The electric hypercar shares its powertrain tech with the Rimac C_Two (Nevera) and is touted as the most powerful road-legal car ever to come out of Italy. It has a liquid-cooled 120 kWh lithium-ion battery pack by Rimac that feeds power to four electric motors on each individual wheel. Pininfarina claims the hypercar will have 1900 horsepower and 1696 lb-ft of torque. 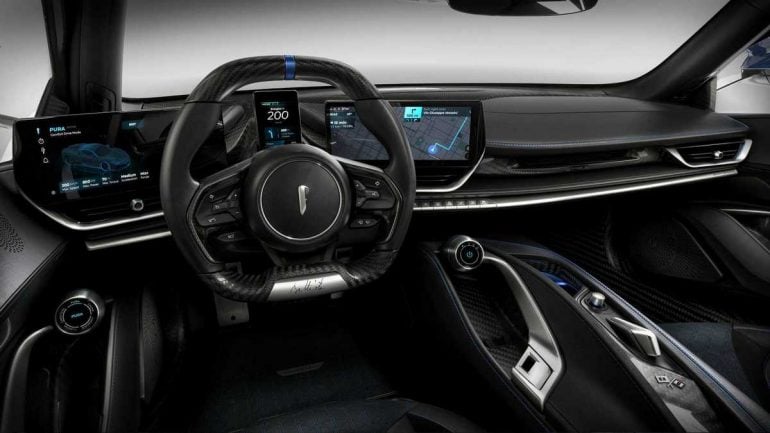 Although the Italian hypercar shares many components and tech with Rimac’s Nevera, Pininfarina has been tuned independently and will have a completely different character. As far as the styling goes, the Battista looks absolutely stunning, which is hardly a surprise. After all, it is a Pininfarina. The company is attributed for designing some of the greatest cars in history, especially for Ferrari. 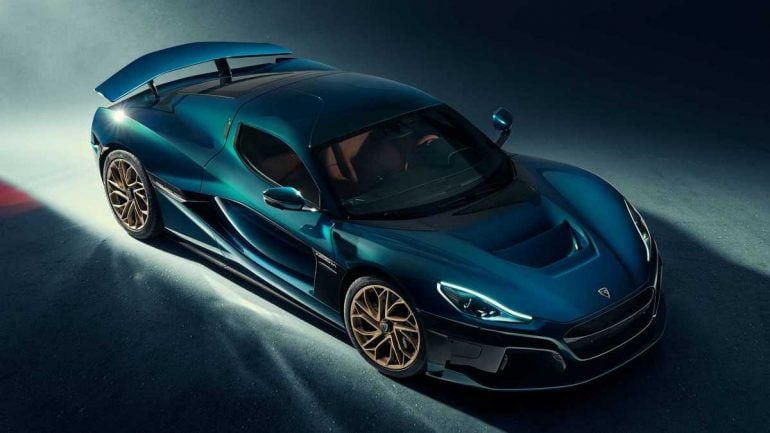 2. Rimac Nevera
When – end of 2021
How much – starts at $2.4 million
Croatian EV manufacturer Rimac recently revealed the production variant of its C_Two (Concept Two) electric hypercar and announced it would be named Nevera as a tribute to the Mediterranean storms that occur off the Croatian coastline. Unlike most of the other boutique manufacturers, Rimac provides EV technology to many big car manufacturers. A lot of the Nevera has been designed and made in-house. 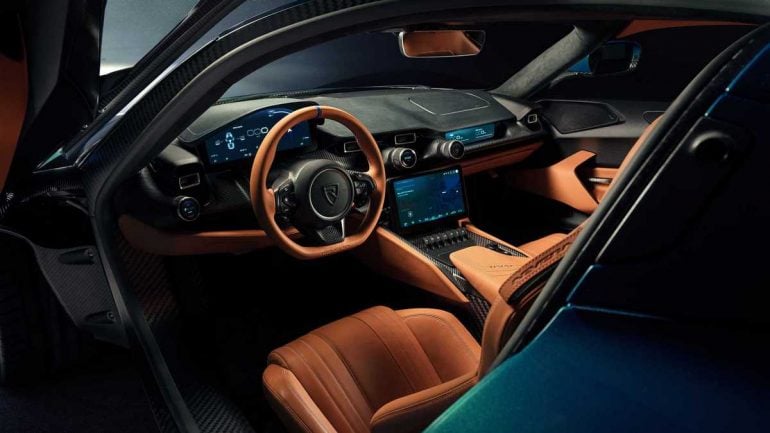 Like most other electric hypercars, the Rimac Nevera features four electric motors powering each individual wheel. The quad-motor setup can cumulatively produce 1,914 horsepower and 1,741 pound-feet of torque, which is enough to send the hypercar from zero to 60mph in just 1.85 seconds, making it the fastest accelerating production car in the world. 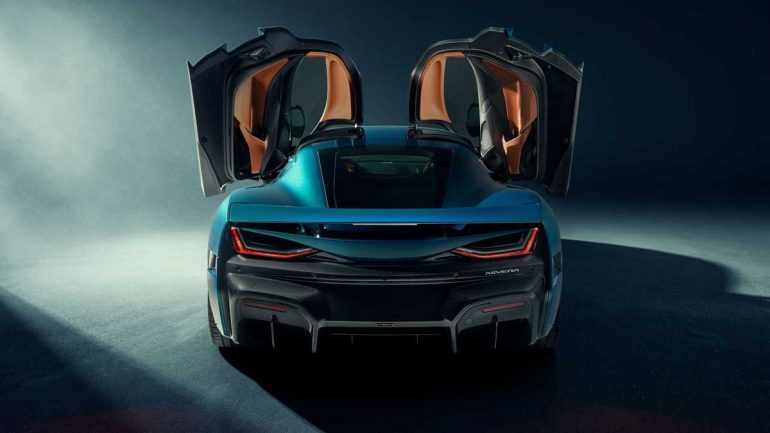 Rimac says it can do 0-186mph in just 9.3 seconds and will top out at 258mph. The Nevera gets plenty of active aero elements, including the front hood, underbody flaps, and the rear wing and diffuser. The hypercar’s 342-mile range is crazy, considering it is a no-compromise hypercar. 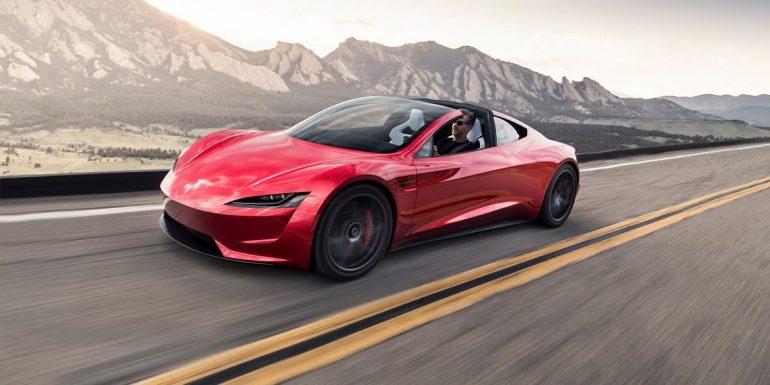 1. Tesla Roadster
When – recent reports have indicated that the Roadster might finally arrive in 2022
How much – starts at $200,000
We had to put the Tesla Roadster on the top – is that even a surprise? There are plenty of reasons why we are most excited about the second-generation Tesla Roadster. Let’s start with the most ludicrous feature of the upcoming electric hypercar from the US – its acceleration figures. Elon Musk claims the new Tesla Roadster will go from 0 to 60 miles per hour (mph) in a mind-bending 1.1 seconds. It’s hard to put that into context. If Tesla can achieve what they are claiming, the Roadster will make all hypercars worth millions of dollars look slow like a snail. 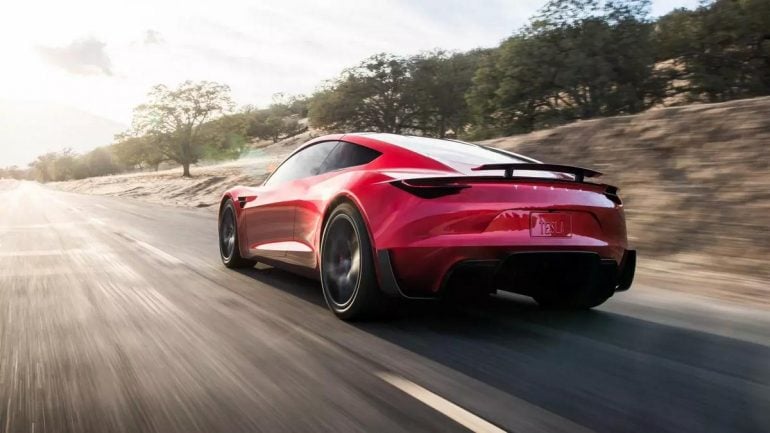 And, in case you’re wondering how Tesla plans to achieve this unbelievable acceleration, it intends to equip the second-gen Roadster with SpaceX rocket thrusters. Then there’s the price at which Elon says Tesla will sell the Roadster. At a starting price of $200,000, the Roadster will cheaper than most run-of-the-mill supercars. 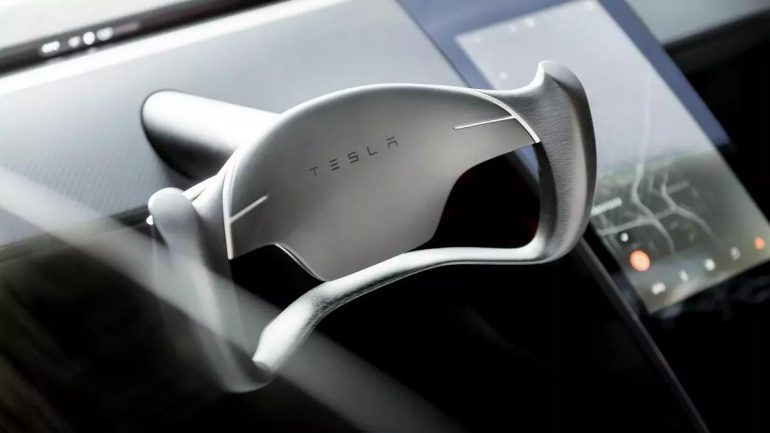 But, the Roadster came out in 2017 with the promise of arriving in 2020. However, we’re already in the second half of 2021, and the Roadster is nowhere to be seen. Typical Tesla!