To break to monotony of usual black sidewall tires, Pirelli has introduced colored editions of its P Zero and Winter Sottozero tires. Basically, they are Pirelli’s prestige and high performance tires made for high-end cars with colored rings on the sidewall – similar to what we see on the F1 cars. These tires are available for pre-order now in the prestige segment measuring 19″ or more, but they will be extended to premium cars as well. Base colors include red, yellow, white and silver. However, the tires can also be personalized according to the customer’s needs. Pirelli says their engineers had to develop new materials and protection systems to make sure the colors remain vivid even with heavy usage.

The second innovation is called ‘Pirelli Connesso’ and it introduces smart technology to its tires by embedding a tiny chip in its sidewalls. The Pirelli Connesso acts as a digital platform integrated into P Zero and Winter Sottozero tires that communicate with the driver via an app, giving them vital information on how the tire is working. The sensor measures pressure, temperature, static vertical load, wear and number of miles covered by each tire. 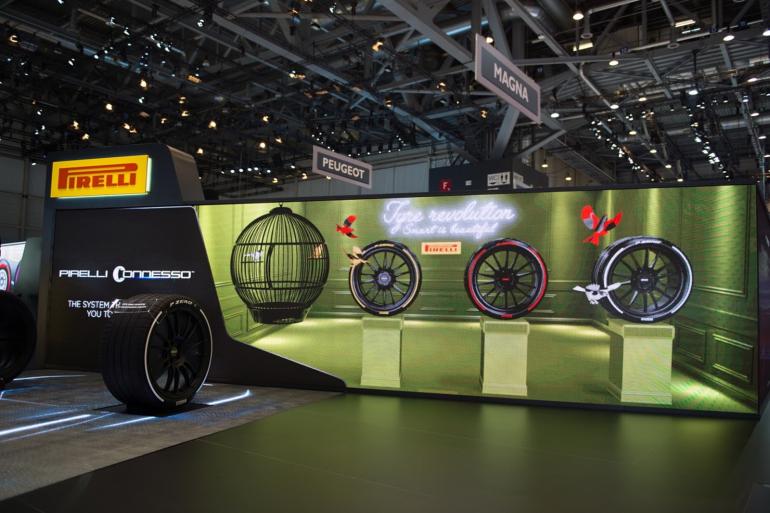 The sensor weighs just a few grams and has no effect on the physical performance of the tire. As opposed to current on-board tire pressure monitoring systems, Pirelli Connesso works both when the car is in motion as well as when it’s stationary. Pirelli says that in a future version, Connesso also will be able detect a drop in pressure remotely and immediately make arrangements for any new tires or maintenance needed, directly in the place where the car is parked. It will be launched in the US this summer, after which Pirelli Connesso will be made available in principal markets within Europe and the Far East. There is no word on the pricing as of yet.