I absolutely love eBay! You never know what you’re going to stumble upon. If you have $2.2-million to spare, one of the coolest combinations possible of two ultimate boy’s toys is on sale on eBay. A bespoke lime green Aventador SV Roadster with a matching MTI Super Veloce catamaran, which means super-fast in Italian, has been listed for sale via JamesEdition in Fort Lauderdale. Both were custom built and are finished in an extremely rare special-order color called Verde Singh, which costs $76,000 alone. The unique combo was cooked up by Miami restaurateur Gino Gargiulo who has appeared on the CNBC TV show The Secret Lives of the Super Rich. 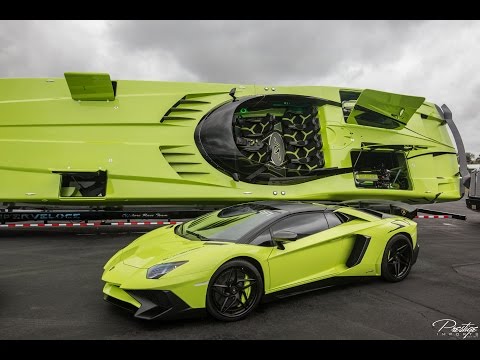 The 2016 Lamborghini has just 700 miles on the clock and is valued at $600,000. On the other hand, the 52-foot catamaran, which is touted as one of the finest built, fastest, most advanced performance boats in the world, is valued at $1,750,000. It took two years to complete and the entire hull and deck are made from carbon-fiber. The seller states: “One of a kind pair. An unexpected family incident “regrettably” forces the sale of this incredible package.” This incredible listing is currently being watched by almost 300 people who hope to bag the incredible package when the sale ends in less than two weeks.

Tags from the story
Lamborghini, Speedboat