For decades, Volvo has been known for producing the world’s safest cars that are boring on the outside but structurally extremely sturdy. However, the Swedish company is trying hard to shed its ‘boring car’ image and their new design philosophy indeed looks impressive. Nevertheless, one will still think twice to link Volvo with top-notch luxury. Get ready to be surprised, the Scandinavian automaker has just unveiled its most luxurious car ever that boasts interiors matching that of a range-topping luxury limo. Meet the Volvo XC90 Excellence, the most opulent version of the Swedish automaker’s new flagship crossover that will debut at the 2015 Shanghai Motor Show. 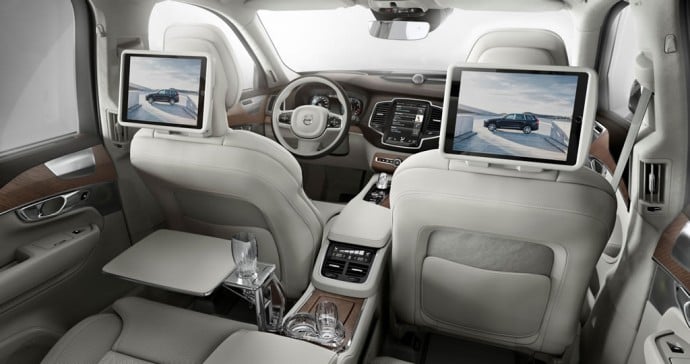 In the Volvo XC90 Excellence model, the wheelbase has been kept intact but the standard seven-seat arrangement has been modified, with the five seats behind the front pair swapped out for two very plush executive recliner seats and some added legroom. The rear seats include massage and ventilation functions, tray tables that fold into the center console, retractable touchscreen displays, an onboard refrigerator, and temperature-controlling cup holders. There’s even a set of crystal glasses made by Orrefors. Other premium features include passenger footrests, ambient lighting, illuminated storage, stitched leather detailing, additional sound insulation in the cabin and a Pirelli Noise Cancelling System so that outside sounds don’t detract from the 19-speaker Bowers & Wilkins audio system. “This is our new flagship car,” Volvo design chief Thomas Ingenlath said of the vehicle. “We have created the ultimate luxury experience of Scandinavian design—this is the car that demonstrates what the name Volvo now means.” There is no word on the price but the Excellence model will be available on sale globally.

Tags from the story
Volvo