Viktor Medvedchuk, with his $200 million megayacht — Royal Romance, joined the ranks of billionaires and their posh superyachts. A close comrade of Putin, this Ukrainian oligarch’s superyacht may not necessarily match the extravagance of Roman Abromovich’s Eclipse or even Solaris; however, its appeal lies in its elegance, styling, and construction. Let’s delve into what sets the Royal Romance ship apart:

Royal Romance superyacht:
What spells romance other than dolphins playing in the yacht’s bow wake on her maiden voyage? That’s the kind of debut the stunning 310-footer made in the high seas. Dutch yacht builder Feadship built the steel-and-aluminum motor yacht Royal Romance in October 2014 at its Makkum shipyard. The first thing that one notices about the gliding goliath is its size. Owing to her large size, the vessel provides sumptuous accommodation for the owners and twelve guests.
It can also easily house a crew of 22 members. While there wasn’t enough information divulged about the ship’s interiors, several sea trails loan an excellent look at the beautiful exterior. The boat’s highlight is a 40-feet long swimming pool located on the main aft deck that can be emptied in less than three minutes.
That’s not all; the massive pool flows into a waterfall, cascading over the transom, partly made of LED-lit glass. This feature becomes the USP and a romantic aspect of the motor yacht’s exterior light plan. Seymour Diamond did the stylish interiors to accommodate 12-14 guests in utmost luxury.

A post shared by The Luxury Lifestyle Magazine (@the_luxury_lifestylemagazine)

Feadship’s in-house team was responsible for the yacht’s exterior styling and naval architecture. She is powered by twin MTU 3,004 hp diesel engines lending a combined power of 6,008 hp (4,480 kW). Royal Romance can reach a maximum speed of 15 knots. It is believed the $200 million megayacht is firmly anchored in the port town of Rijeka, Croatia. As per reports, the megayacht is extremely expensive to maintain — perhaps up to $1 million a month. 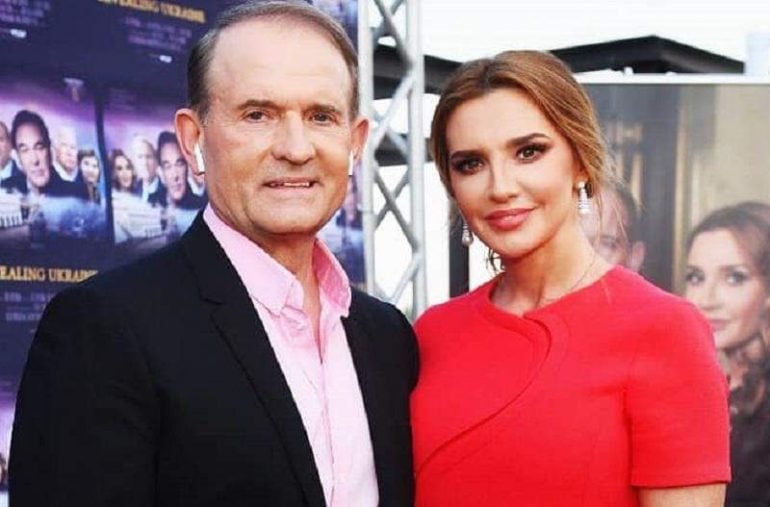 About Viktor Medvedchuk:
67-year-old Medvedchuk turned into an oil and media mogul from a legal eagle. The man was known as one of the ‘Kyiv Seven’ and the founder of a Kyiv-based law firm. According to Forbes Medvedchuk is reportedly worth around $620 million. The Ukrainian millionaire is also a pro-Putin politician, and he owes his oil-based fortune to his ties to the Russian dictator. The Russian president is the godfather of Medvedchuk’s teenage daughter Daryna.