Crash testing a car for homologation purposes is a very expensive affair; it usually ends up costing millions of dollars to an automaker for going through the process, even for a relatively cheap family car. However, it’s much, much harder for small companies like Rimac for which every penny counts to keep the lights on. But it’s just as difficult, if not more, for diehard automobile enthusiasts to watch one of these incredibly rare cars worth millions of dollars getting slammed into the wall. Maybe, Rimac knows this fact and put a caution at the beginning of the crash test video for its C_Two hypercar that reads: “Some car fans may find this content disturbing. Viewer discretion advised.” 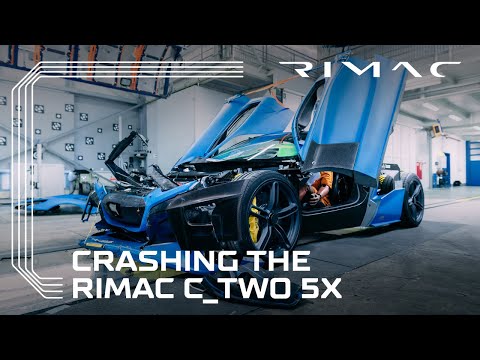 Rimac debuted the C_Two EV hypercar way back in March 2018 at the Geneva Motor Show and claims that it will start delivering them to the lucky 150 customers from next year. But, before that happens, the Rimac C_Two needs to go through the crash testing process to be road legal in all parts of the world. The production C_Two carries a starting price of $2.1 million; however, Mate Rimac, the CEO of Rimac Automobili, claims the price of a prototype is even higher. The whole testing process needs the car to be crashed not once but multiple times, which gives us an idea of how expensive the crash testing process can be. To get around this, Rimac reused the same monocoque chassis five times for various tests – something which was also done by Koenigsegg. It turns out Rimac C_Two’s monocoque was strong enough to handle multiple tests. The Rimac C_Two is claimed to make 1,888 horsepower and 1,696 pound-feet of torque, which can help the electric hypercar blitz the 0-60mph sprint in just 1.85 seconds and hit a top speed of 256 mph. Rimac has also said that the C_Two will have a range of 404 miles and arrive with Level 4 autonomous technology.

Tags from the story
Hypercar, Rimac