Pink Floyd was known to etch their mark at significant historical sites, including the famous Pompeii concert. This is why it must have been quite delightful to hear that they were to play a concern in Venice, back in 1989. The local authorities put on their progressive thinking hats and called for a free rock concert in the ancient city to flex their modernness – because rock music was considered quite modern back in ’89. However, they soon learned that organizing a rock gig is a lot more tedious than running a sophisticated city of Venice could be.

As soon as the concert was announced, the locals and cultural custodians raised concerns about the fragility of the ancient architecture. The band was known for their flamboyant stage setups and amped-up volumes, which could fracture some key parts of the heritage buildings that speckle the city of canals. But the show must go on, and to ensure that the band promised to pipe down their decibel levels from 100 to 60 and to play their entire set on a floating barge that would be stationed 200 yards from the revered St. Mark’s square, where they were initially slated to play.
For the uninitiated, Pink Floyd gigs are legendary for more than just the audial-psychedelic trips they set you off on. They are a true spectacle of color, light, and larger-than-life props that have been symbolic of the band’s stage act. Hosting a band of this magnitude was bound to bring lovers of music and art alike, to a square of worship. The authorities estimated a healthy attendance, given that the show would be broadcast by RAI, a government-sponsored broadcaster, across 20 countries. Unfortunately (or fortunately), on the day of the gig, 200,000 people showed up. That’s more than three times the number of citizens of Venice. 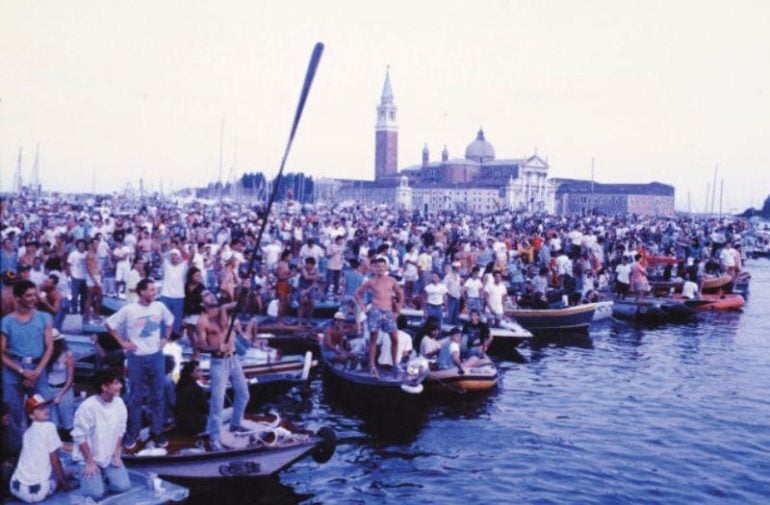 Now, you wouldn’t invite fans to an acid-induced trip with the world’s best-selling band playing, and ask them to be on their best behavior, would you? The unforeseen surge of attendees for the ‘free’ gig left the authorities and civic infrastructure vulnerable. There weren’t enough urinals to accommodate the bottomless bladders that kept quenching their desire for liquor. As a result, patrons had no option other than relieving themselves on the decorated walls of the heritage structures. Many would see this as sacrilege, but when you have to go, you have to go, wouldn’t you agree? And that’s not all.


The crowd dispersed leaving the city with a whopping 300 tons of garbage to clear out. Imagine, the pristine, quaint city of Venice suffering from a plague of empty bottles and cans spread across 500 cubic meters. It’s as dystopian as the lyrics of Roger Waters. The only significant structural damage caused was a piece of marble falling off ‘The Judgement of Solomon’ statue. However, it has not yet been determined if the damage was caused by the fans or the volume of the music. So, maybe the efforts of the band to preserve the monuments were fruitful.
It goes without saying that the authorities, who were warned before the concert, saw many fingers wagging their way in the classic ‘I told you so’ gesture. “This wasn’t a cultural event,” said the former mayor of Rome, Renato Nicolini, while speaking to the Washington Post, “but a great commercial enterprise promoted by television and the record industry.” There were many accusations that RAI aimed to profit from this event at the cost of the city. The mayor at the time, Antonio Casellati, defended his endeavor by stating that the television network put undue pressure on his administration to make the event possible. However, he was silenced by enraged Venetians who asked for his resignation and accusing him of turning Venice into a toilet.
In the same week, the entire city council along with Mayor Casellati stepped down from their posts. Pink Floyd was famous for its anti-establishment stance, but little did they expect that a good gesture from a city council would end up toppling everyone in power. This is truly a tale fit for the bards of Venice or even for the famous British psychedelic band to pen down a number in its memory.
Tags from the story
Venice