Our planet is home to some fantastic racing circuits and every petrolhead in this world dream to drive around some of these beautiful facilities at least once before they die. After careful consideration, we have concluded that the following seven racetracks are the best in the worlds in order of their desirability. We considered several parameters to rank them, which include the track’s history, location, the circuit’s quality and the corners and chicanes. So, without further ado, here’s our list of top 7 dream racing circuits around the world you must drive before you die. 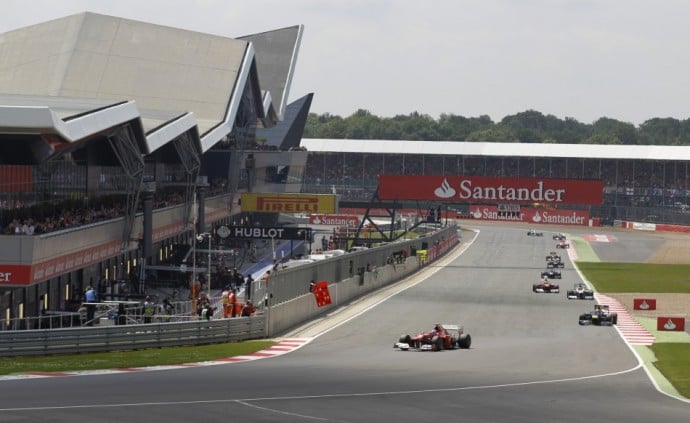 7. Silverstone, UK
First used – 1950
Current length – 3.66 miles
We start with Silverstone, the home to the British Grand Prix. The circuit is built on the site of a World War II Royal Air Force bomber station, RAF Silverstone, which opened in 1943. The airfield’s three runways, in classic WWII triangle format, lie within the outline of the present track. The track was first used for motorsport by a group of friends who set up an impromptu race in September 1947, during which Maurice Geoghegan hit and killed a sheep (the race was later referred to as “The Mutton Grand Prix”). However, in 1950, Silverstone hosted the first ever Formula One World Championship Grand Prix. The 3.66-mile circuit is considered to be the spiritual home of Formula 1 and holds the reputation of being the cornerstones of modern racing. 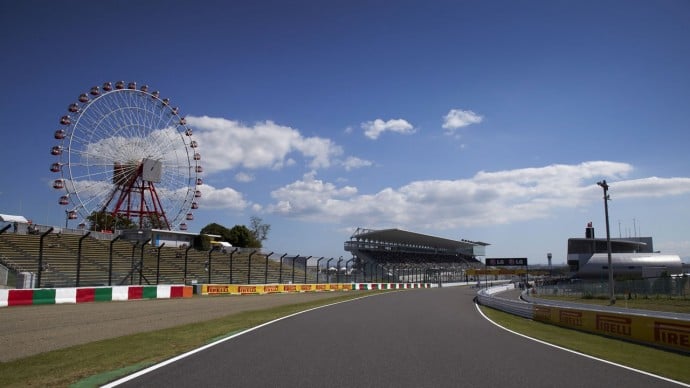 6. Suzuka, Japan
First used – 1962
Current length – 3.609 miles
Originally designed as a Honda test track in 1962, Suzuka is one of few circuits in the world to have a ‘figure 8’ layout, with the 1.2 km back straight passing over the front section by means of an overpass. The cross over makes the track very, very interesting and look awesome. The Suzuka circuit is one of the world’s leading technical courses, and is one of the oldest remaining Formula One World Championship racetracks along with being one of the fastest tracks. In fact, after the infamous crash of Allan McNish in 2002, which put the Toyota F1 driver through a metal fence, the owners of the track were forced to re-design one of the corners. In addition to the track, the Suzuka facility includes hotel resort complex, aqua park, gardens and spa all rolled into one. 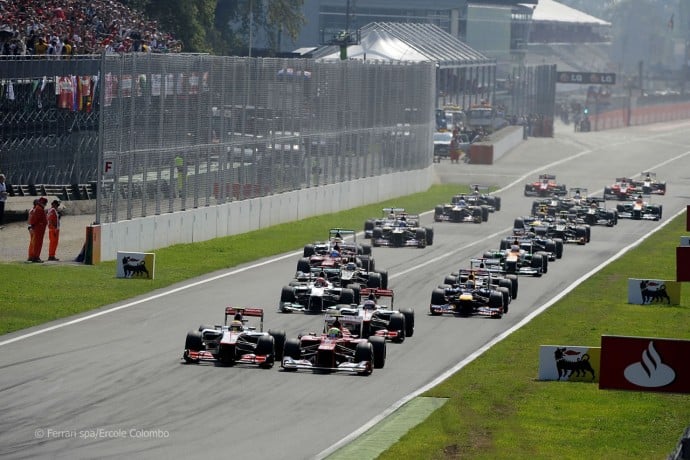 5. Monza, Italy
First used – 1922
Current length – 3.4 miles
Monza is one of the biggest names in the motorsports history. Known as the home of the Tifosi, supporters of Italian team Scuderia Ferrari, Monza has hosted the Formula One Italian Grand Prix since the inception of the sport. This is one of the tracks that has changed significantly since its birth. Originally, the track used to be banked, in an oval-shape but an accident in 1961, where driver Wolfgang Von Trips was killed along with 15 spectators, led to it being declared unsafe and eventually abandoned, as the circuit was shortened. In fact, the original circuit is considered as one of the most dangerous in the history of motorsports as it has claimed the lives of 52 drivers and even 35 spectators. It remains a challenging track, and home to the Italian Grand Prix. Monza is the fastest F1 track on the modern calendar, with cars flying around at 210mph. The fastest ever lap of an F1 racing track was registered here by Juan Pablo Montoya, who completed the circuit in 1:20.264. 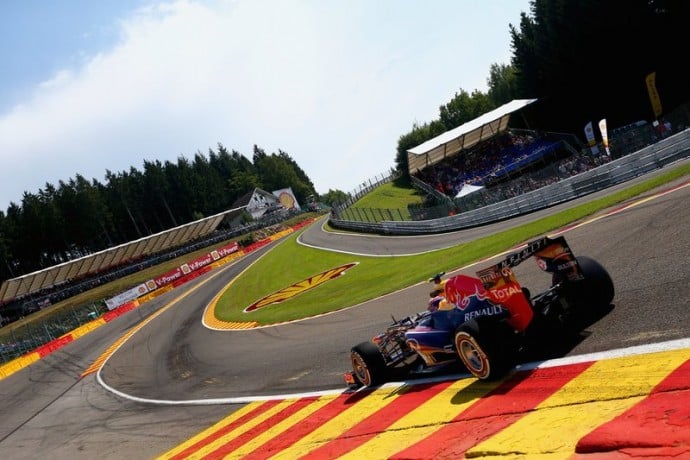 4. Circuit de la Sarthe, Le Mans, France
First used – 1923
Current length – 8.46 miles
The Circuit de la Sarthe in France is home to the oldest endurance race in the world, Le Mans. The track uses local roads that remain open to the public most of the year. The circuit, in its present configuration, is 13.629 kilometres (8.47 mi) long, making it one of the longest circuits in the world. It is a largely flat-out circuit and before the chicanes were added to the Mulsanne straight, a six-kilometer stretch of road linking the Tertre Rouge and Mulsanne corners, in 1990, the Group C cars of the 1980s had managed to reach top speeds of 400kph or 250mph. The track opened in 1923 and in addition to the Le Mans 24 hour race, it has hosted MotoGP, the French Grand Prix and Le Mans 24 hour Moto. This track has also seen many changes over the years with the increase in speeds of the racing cars. 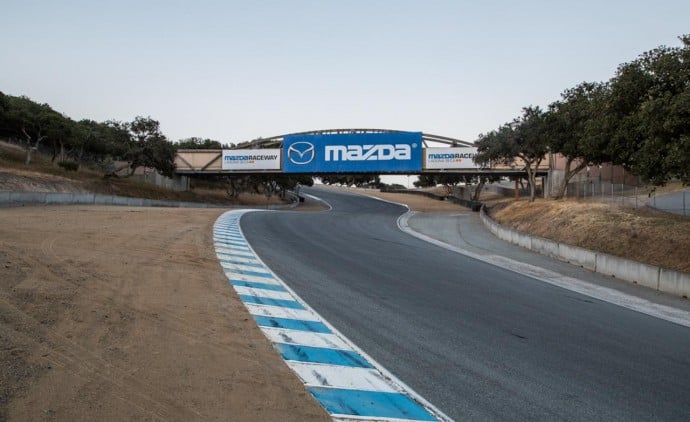 3. Mazda Raceway Laguna Seca, California, USA
First used – 1957
Current length – 2.23 miles
The Laguna Seca track was built in 1957 at a cost of $1.5 million raised from local businesses and individuals on part of the US Army’s Fort Ord after the nearby Pebble Beach Road Races were abandoned for being too dangerous. The name Laguna Seca is Spanish for ‘dry lake’. The area where the track now lies was once a lake, and the course was built around the dry lakebed. After the course was reconfigured, two artificial ponds were added. To be very frank, there aren’t many tracks in the world with a turn as iconic as the ‘Corkscrew’. People come from around the world to experience this corner as it is considered one of the motorsport world’s most challenging turns due to the drop in elevation as well as its blind crest and apex on the uphill approach. From entering the Corkscrew corner to exiting it, riders and drivers drop the equivalent of five and a half storeys in just 130 meters. It also has the double-apex “Andretti Hairpin”, named after Formula 1 champion Mario Andretti. The track also witnessed one of the most epic battles of MotoGP between Yamaha’s Valentino Rossi and Ducati rider Casey Stoner in 2008. It’s also considered as one of the most beautiful tracks in the world. 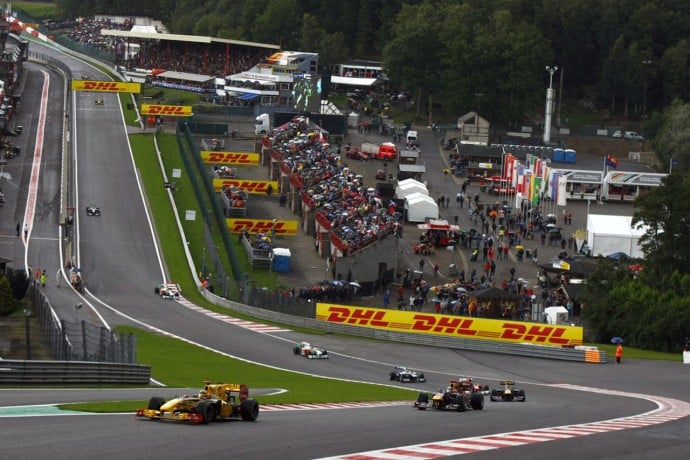 2. Spa Francorchamps, Belgium
First used – 1922
Current length – 4.35 miles
This brings us to the world’s most picturesque racing track in the world, Belgium’s Spa Francorchamps circuit. Among the rolling hills of Belgium, this is known as one of the most challenging tracks in the world, due to its twisting, hilly nature. Originally, the track used normal roads, around three towns with houses and farms right next to the track. While racing on Spa’s old circuit in 1966, Jackie Stewart crashed his BRM into a ditch, sitting unnoticed upside down in his car for 25 minutes as petrol soaked through his overalls. Things didn’t get much better when the Scotsman was rescued, with the ambulance driver getting lost en route to the hospital. The new track that opened in 1981 is shorter and less dangerous; however, it remains to be extremely technical and very challenging. It is also home to the stunning Eau Rouge corner which is probably one of the most amazing corners. 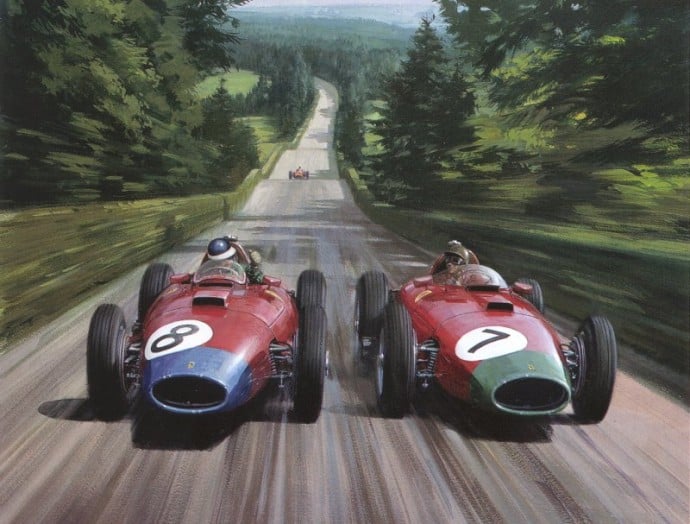 1. The Nürburgring, Germany
First used – 1927
Current length – 12.93 miles
Finally, we end with the most dangerous, yet most exhilarating, racing circuit in the history of motorsports, which also happens to be my personal favorite, the Nürburgring. It is a motorsport complex built around the village of Nürburg, Germany. It features a modern Grand Prix racetrack built in 1984, and a much longer old North loop track, which was built in the 1920s around the village and medieval castle of Nürburg in the Eifel Mountains. Described as “The Green Hell” by Jackie Stewart, the track is 17 miles long, with 170 corners. Several touring car series are still competing on the Nordschleife, using either only the simple 20.8 km (12.9 mi) version with its separate small pit lane, or a combined 24.4 km (15.2 mi) long track that uses a part of the modern F1 track plus its huge pit facilities. The facility is also widely used by automakers to develop their performance-oriented cars and post lap times to boast their supremacy over their competitors. The track is also open to public for track days and there are many accidents every year. No official figures have been released, but estimates say 3-12 people die each year at the track, most of them being members of the public. For just €26 per lap, members of the public can drive on this track on pretty much anything, and according to us, this track has to be on top of the list of the dream racing circuits around the world you must drive before you die.

Tags from the story
Best-Of, Top-10