There is no better way to intimately explore a place than by bike. Studio Roosegarde has introduced an illuminated bike path in Nuenen, Netherlands that can transform the very Dutch landscape around it without leaving an ugly carbon footprint behind. The kilometer-long ‘Van Gogh-Roosegaarde Bicycle Path’ is made of thousands of solar powered stones arranged in swirling compositions likened to the painter Vincent van Gogh’s iconic painting ‘Starry Night’. 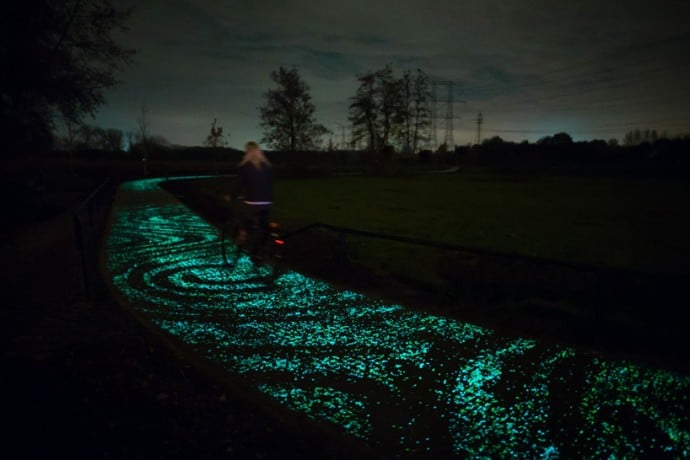 The light emitting bicycle path combines innovation with cultural heritage in the city where the artist lived in 1883. Innovative technology such as Dynamic Paint, Interactive Light, Induction Priority Lane and Road Printer is used to create the swirling glowing lines that charge during daytime and illuminate by night for eight hours. As a result this increases visibility and safety.

The Van Gogh-Roosegaarde Bicycle Path marks the second Smart Highway project between Studio Roosegarde and Heijmans Infrastructure, which aims to make smart roads by using light, energy and road signs that interact with the traffic situation.