China has always been a forerunner when it comes to technology and trains. In doing what it does best, the country recently unveiled a prototype for a high-speed magnetic-levitation bullet train – one that runs at a speed of 600km per hour. The model has been developed by the state-owned China Railway Rolling Stock Corporation (CRRC) with the actual train scheduled to hit tracks by 2021. 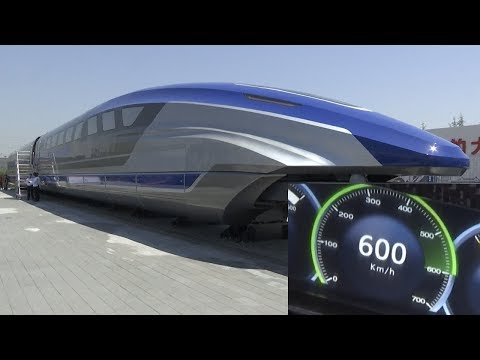 Called the maglev – short from magnetic levitation, the system is built using magnetic forces that help it achieve high speeds. In total, the train utilizes two sets of magnets – one that allows lifting the train off the track and the other used to propel it forward. Owing to the frictionless, ‘floating’ technology, the maglev can achieve high speeds of up to 600km per hour without losing its balance or acceleration. The train is also purported to be faster than jet travel over certain distances, considering the additional time taken for security checks at airports.

Currently, only South Korea and Japan run their own maglev trains, with China being the third to join the row. The prototype is currently going through extensive tests before it can be deemed fit for being deployment in 2021. China Railway Rolling Stock Corporation (CRRC) is also working on an experimental center and a high-speed maglev trial production center, both of which are expected to become operational by the end of the year.