What you see above in the picture is a new private plane concept by international agency Technicon Design which has solar panels fixed all over its fuselage but more importantly it doesn’t have windows for the passengers. The IXION windowless jet was conceptualized by Technicon Design’s French office which used its vast experience working in the commercial aviation sector to come up with the innovative design. Instead of small windows, the fuselage from inside has massive displays which uses external cameras to capture a real-time, 360-degree panoramic view of the space around the plane and project it inside to offer immersive views to the flyers. 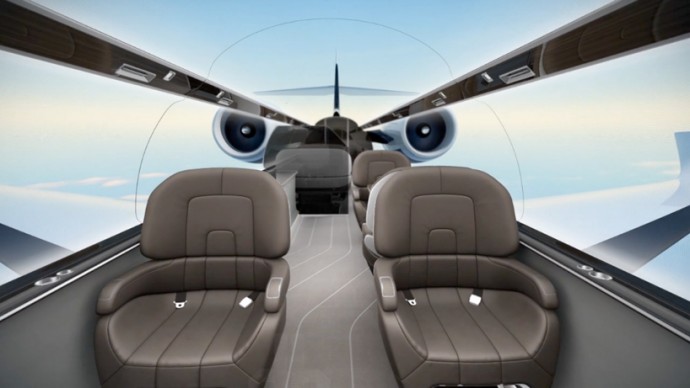 The images are beamed on to display panels on the cabin walls and ceiling, giving passengers the feeling that they’re flying in a transparent fuselage. A similar concept was earlier shown by Spike industries on its S-512 Private Jet but the IXION jet has taken the idea future by adding more functionality to it. The flexible displays can be used for other purposes than just displaying the view from outside. They can be used for in-flight video conferencing or displaying photos or other images in addition to being used to display landscapes, be it a sunny beach, a desert or even outer space. Have a look at the pictures and the demonstration video of the concept; it’s amazing!