China, also known as the factory of the world, is widely identified as the world’s largest producer of concrete, steel, fertilizer, clothing, and toys. I think that list is incomplete without the addition of transparent walkways and vertigo-infusing suspension bridges. They have confirmed their obsession to scare the daylights out of acrophobics by building the most freaky, adrenaline-boosting bridges in the world. There is the world’s longest suspension glass-bottom bridge opened in Lianzhou, and another 1601 foot long glass-bottomed suspension bridge, the Hongyagu bridge, too, that also wobbles mid-air for the sake of the thrill. China’s tryst with thrilling bridges has reached new heights (as if that was even possible) with the Ruyi Bridge that takes things too far as its a double-deck glass bridge with a mind-boggling surging design that is just too scary for some people. The glass-bottomed bridge stands 140m above the ground and is 100 meters long, with many people finding it hard to believe that this creation is even the real deal.

Ruyi Bridge in Taizhou, Zhejiang, China. The footbridge, made up of three undulating bridges, has a span of 100m and is 140m above the Shenxianju gorge's floor. h/t @ritholtz pic.twitter.com/SqfG4e1Fa6


After seeing drone footage of the bridge on Twitter, Dan Grassi wrote: ‘If this is real there would be a location (lon/lat), so I call it fakes.’ And after seeing a clip of the crossing on YouTube, ‘oceans’ demanded: ‘ Latitude and longitude of this “bridge” or it didn’t happen.’ not everyone was so cynical after ogling the video as Paul De Rego said, ‘Architecturally beautiful! Functional and artistic! Love it!’ The Ruyi Bridge is designed by He Yunchang, a steel structure expert, to look like a jade ruyi – a ceremonial spectre that is a symbol of good fortune in China.

Wow!
This is Ruyi Bridge, in Zhejiang China 🇨🇳….
Dangerous but very creative! 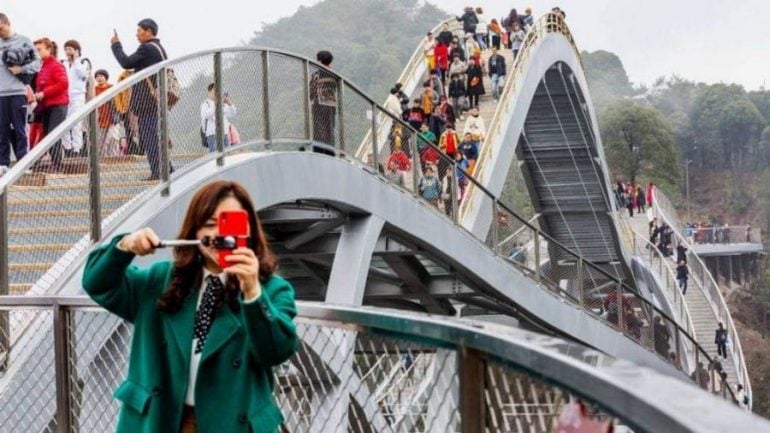 Tags from the story
China, Glass