“If the path is beautiful, let us not ask where it leads,” but there is always the question of how you are getting about. The world possesses some spectacular options to relish the journey as much as the destination, and it’s called a luxury train travel. For those who genuinely want to indulge in an unforgettable travel plan, truly immerse in all these beautiful places, a zipping plane journey will skip the beauty and only take you from one place to another. To feed your wanderlust, one needs to experience the satisfying sipping of wine while focusing on the wavering shapes of nature. Document the memory of meandering through the best locations in the world, all while relaxing in luxurious suites on some mesmerizing trains. Here are the world’s most luxurious and expensive train rides:

Palace on Wheels – India
39 years of service, 23 opulent coaches,104 tourists,14 saloons, and a spa- India’s first luxury train in the post-Raj era that continues to offer excellent service in classic Indian style. To experience India’s stately splendor and incomparable hospitality, guests need to opt for seven-night & 8 days itinerary. It departs from New Delhi and covers Rajputana kingdoms like Jaipur, Sawai Madhopur, Chittaurgarh, Udaipur, Jaisalmer, Jodhpur, Bharatpur, and Agra before returning to New Delhi. The train service was refurbished in 2009 by Delhi-based interior designer Monika Khanna.
Travelers can see magnificent architecture in the form of forts, palaces, and even the ‘wonder of the world’ Taj Mahal. They also embark on exploring the wildlife at Ranthambore National Park and Bharatpur Bird Sanctuary, all from the comfort of a master bedroom suite, lounge, delicious food, and friendly service. The Palace on Wheels is equipped with modern amenities like en-suite bathrooms, air-conditioning, satellite TV, WiFi connectivity, dressing or writing table, etc. Various spa therapies are available, such as Ayurveda, Orient signature, Thai aromatic, and stone therapy, provided by trained masseurs and experts.
If you are seduced by the romance of train travel, the Palace on Wheels journey is your ultimate honeymoon offering you ample time and space to unravel the varied tapestry of magnificent landscapes like desert, forts, wildlife, and jungles and a glimpse of myriad colors.
To book a Super Deluxe Cabin on the Palace on Wheels, one needs to shell out $11,000 per cabin. 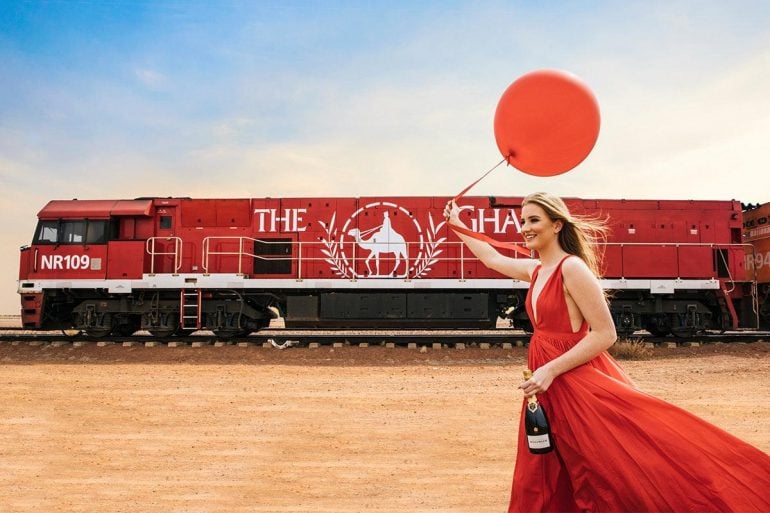 The Ghan – Australia
Not every journey one takes is packed with history. The same can’t be said about The Ghan. This treasure-of-a-train is a legendary rail service operating since 1878. Back in 1924, the train carried more than 100 passengers, livestock, and supplies. As one of Australia’s premier luxury train routes, Touted takes passengers on a three-night, 2,979-kilometer tour from Darwin to Adelaide. 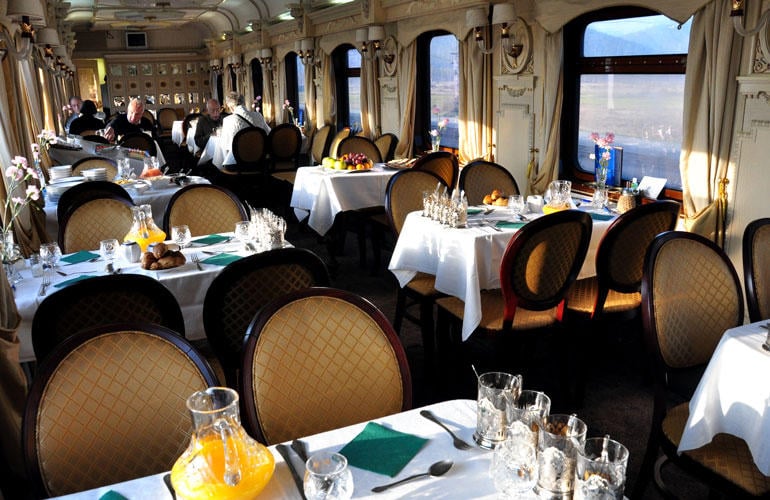 To see Russia’s snow-capped mountains, the train makes four winter journeys in February and March. July is also an excellent time to hop on board as it coincides with the Naadam Festival, a prominent local sporting event. The 15-day voyage in the majestic Imperial suite will cost a whopping $76,200, making it one of the most expensive train journeys in the world. The Golden Eagle, which covers three categories of cabins, features state-of-the-art amenities and en-suite facilities, is the only private train of its kind operating in these regions of the world.


Imperial Suites are the most spacious cabins available onboard the Golden Eagle measuring 120 sq ft. In addition to comfortable cabins are beautifully appointed Bar Lounge cars and Restaurant Cars. Those worried that you didn’t get enough time to practice your Russian before you arrived? Fortunately, lessons are offered onboard.
Rovos Rail Pride of Africa – South Africa
The Pride of Africa is a luxury train established in 1989 by Rovos Rail and is billed as the “World’s Most Luxurious Train.” Pride of Africa’s lovingly-restored Pullman-style carriages is finished in polished teak and decorated and furnished in the opulent and decadently comfortable style of 1920. One can experience the richness of southern Africa, with north and southbound routes between Pretoria and Cape Town.
You can opt for the famous 3-4 night journey or spend 15 peaceful nights traversing Zimbabwe, Zambia, the Democratic Republic of Congo (DRC), and Angola. For your utmost comfort, there are three styles that guests can choose from (Royal, Deluxe, Pullman), with varying levels of luxury.
The Rovos Dining Cars are beautifully done in a Victorian setting and produce a consistently high standard of cuisine.
To truly feel the warmth of Africa on your skin, proceed to the Rovos Observation Car to bask in the balmy darkness of the African night.
The 3 days / 2 night weekly journeys cost $3500 per person, while the extravagant 15-day excursion in the luxe Royal Suite will set you back by $ 22,900 pp. 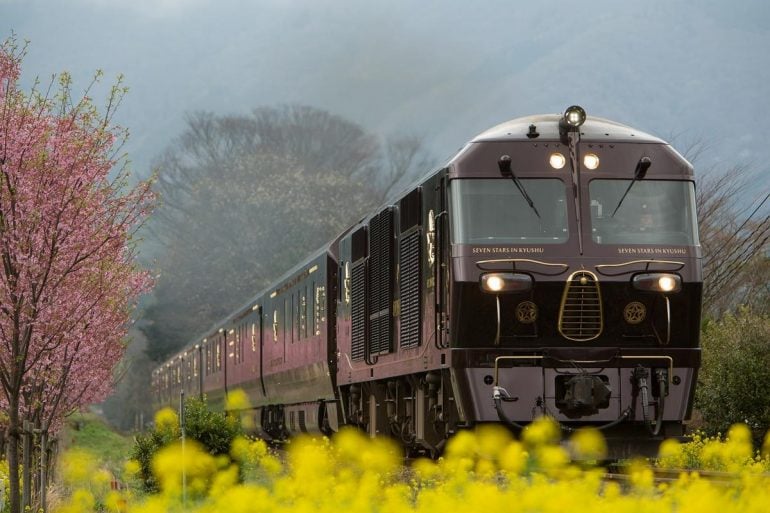 Kyushu Seven Stars – Japan
Japan’s Seven Stars luxury sleeper train is a metaphor for the saying that traveling is not just about the destination; getting there is half the fun. Derived from the seven prefectures of Kyushu, made up of seven cars and offering seven-star treatment, is Japan’s deluxe sleeping car excursion train operated by Kyushu Railway Company. Kyushu Seven Stars is a moving marvel consisting of five sleeping cars, a lounge car, and a dining car, with a total capacity of 28 passengers. At the rear are located two deluxe suites with observation in addition to 12 standard suites. The luxurious suites feature a sleeping area, a sitting area, and a private bathroom consisting of a shower and toilet facilities. It’s the décor that is noteworthy with radiant woodwork, brass fittings, and vintage lights. There are some distinctly Japanese features like elegant bamboo blinds, delicate paper screens, and wooden shutters. 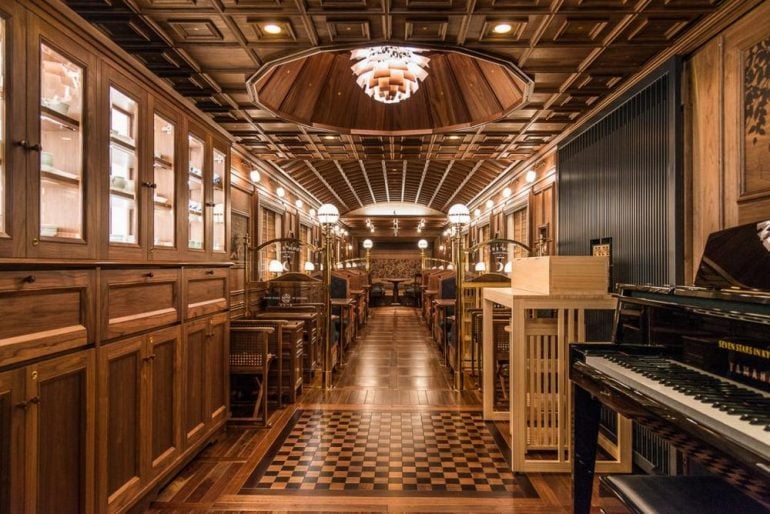 Kyushu is a treasure trove of food, and the master chefs prepare each meal with care to ensure your dining experience is sure to make your trip even more exceptional. Inside the Jupiter Dining Car, guests will enjoy more than friendly staff and outstanding service.


You won’t forget the delightful afternoon tea treats from the Patisserie Muguet by Ryuji Ikeda, an acclaimed Kyushu pastry chef.
When you are savoring the food, don’t forget to look like a dish yourself; the Seven Stars encourages a fairly strict dress code on the train; it certainly helps maintain the magic onboard.
The most enriching experience on this train journey is viewing the scenery from its vast windows. The visuals are enhanced further with a grand piano and live musical entertainment in the evenings. There are two main itineraries, of either 2 or 4 days, offering a unique way to enjoy the island, cruising some of its 3,000 km track for nearly $7,200 per person. 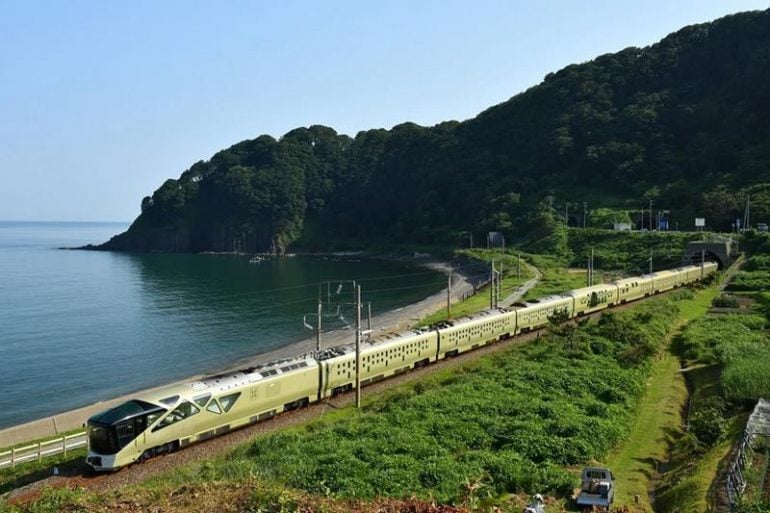 Train Suite Shiki-Shima – Japan
Isn’t the whole purpose of being on a luxury train to put your daily commute to shame? East Japan’s Shiki-Shima understands that and gives you a world of unmatched opulence and grandeur. For those who have the moolah, this 10-car sleeper includes a lounge car, dining car, and six carriages devoted to17 private suites and will welcome only 34 passengers on board at a time.


The stunning two-floor suites include a working fireplace, a Cypress wood bath and will cost around $10,000 from Tokyo to Aikido. Japan has been widely regarded as a frontrunner in high-quality rail travel, and with the Shiki-Shima, it upholds its reputation as an icon of both high-speed and luxury. It has two observatory cars with glass walls and ceilings.
The train designed by Ken Okuyama is the best way to see uninterrupted views of eastern Japan’s forests, fields, and coastline. But what lies within is even more spectacular; the lounge has a piano bar and, uniquely-designed walls and windows effectively evoke “a quiet forest.
While the Shiki Shima signature tune, ‘Train Suite,’ aids relaxation even more. Not only does it boast a signature tune, in true Harry-Potter style, but the train also flaunts a platform 13 1/2 that has been built at Tokyo’s Ueno Station for Train Suite Shiki-Shima’s exclusive use.
To make your travel experience even more fabulous, Michelin-starred chef Katsuhiro Nakamura devised a food menu that changes to adapt the culinary style of the regions through which the train is passing. 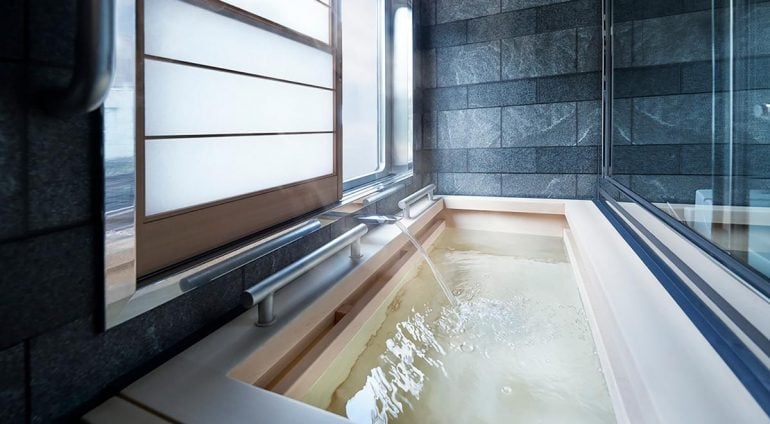 If you want to go on the ride-of-a-lifetime, only money won’t get you there; those who want a ticket to ride need to fill out an application rather than purchase a fare.


The lucky few are then selected through a lottery. NHK World reports that only one out of every 76 applicants could get a place on the train’s first trip in May 2017.
Tags from the story
Australia, Belmond, Europe, Japan, Russia, South-Africa, Train, Venice