Countries are dishing out glass-bottomed bridges every season. Like a summer/spring fashion show attracting hoards of humans, these glass-bottomed bridges have visitors flocking to strut their stuff on the transparent runway, albeit with an undersupply of confidence (unless you’re a daredevil). Less than a week ago, we reported the world’s longest suspension footbridge spanning a whopping 2365 feet is set to open in the Czech Republic sometime this year. However, till that happens, the title will be enjoyed by Bach Long in Vietnam. This 2,000-foot-long glass-bottomed pedestrian bridge means “white dragon.”

The bridge is suspended a spine-chilling 492ft above a vast jungle, not for the faint-hearted. Perhaps learning that the bridge was constructed of French-produced tempered glass, making it strong enough to support up to 450 people at a time, will calm the nerves of many and encourage visitors. The presence of a glass floor means tourists can get amazing views of the lush green gorge far below. “When standing on the bridge, travelers will be able to admire the beauty of nature,” Hoang Manh Duy, a representative of the bridge’s operator, said. As per the Sun, officials from Guinness World Records are expected to verify the claim next month. 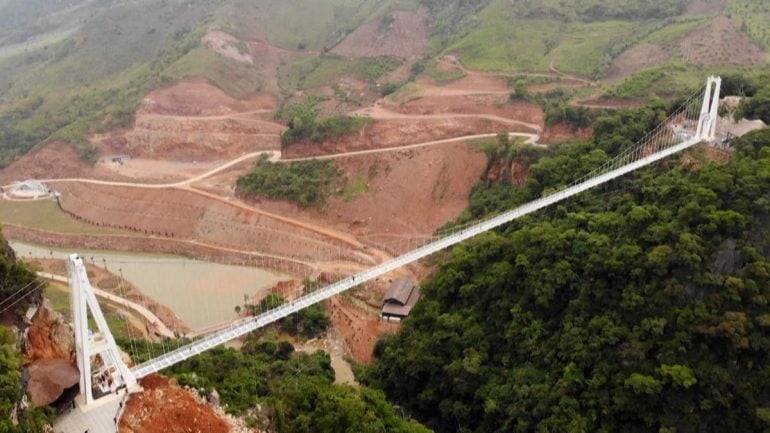 The company claims Bach Long is the world’s longest glass-bottomed bridge, surpassing the 526-meter structure in Guangdong, China. Vietnam is home to several natural and architectural wonders and these spectacular bridges are a key element in contributing to its tourism industry. Golden Bridge, aka Cau Vang, is another Vietnamese tourist attraction situated 1,400 meters above sea level. What makes it so unique is the gigantic sculpted hands that support it from beneath.

Tags from the story
Vietnam

Not in China or Vietnam, but the world’s longest suspension footbridge spanning a whopping 2365…