For the past four years in succession, Bulgari has set several world records in watchmaking, and it appears that 2019 is not going to be any different for the Italian luxury brand. At this year’s Baselworld show, Bulgari has continued with its tradition of reaching unprecedented levels in the horological world by revealing the world’s thinnest mechanical automatic chronograph: Octo Finissimo Chronograph. Creating the fifth world record by a watch from the Octo Finissimo line in the past five years, the new Octo Finissimo Chronograph measures just 6.90mm, while the movement measures 3.3mm. The record was previously held by a Piaget timepiece measuring 8.24mm. The integrated movement BVL 318 is equipped with a peripheral rotor to make the watch the flattest automatic chronograph in the world. What makes it even better is that the movement is automatic and the watch also has features a GMT complication. The GMT function can be operated to set the local time by pressing the button at 9 o’clock. 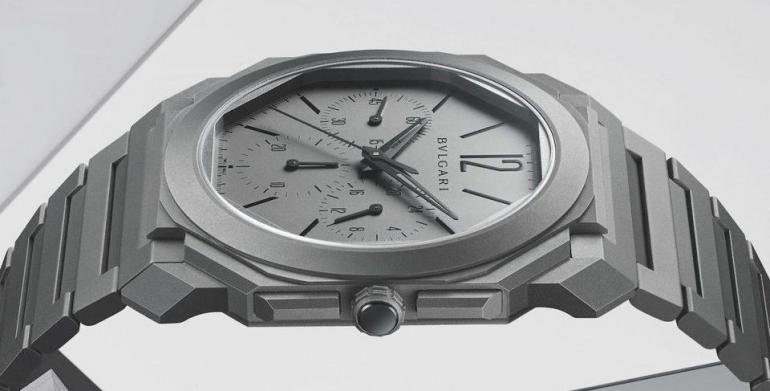 The titanium case measures 42mm in diameter and 6.90 mm in thickness, as mentioned before. The dial is made of sandblasted titanium where the home time is displayed on the subdial at 3 o’clock using a graduated 24-hour day/night scale, running second displayed at 9 o’clock, and the chronograph minutes counter positioned at 6 o’clock. The movement has a power reserve of 55 hours and can be viewed through a sapphire crystal caseback. Our capability of fusing edgy, magnificent Italian design with the ultimate Swiss engineering and craftsmanship — this is why I talk about Rinascimento from Bvlgari,” says Jean-Christophe Babin, CEO of Bulgari. “It is truly a revolution of design and technology.” The watch is priced at $17,600.

Tags from the story
Bulgari, World-Records