In the past, we have seen many watchmakers experiment with skull art and strange yet eye-catching skull motifs to craft new timepieces. Hublot’s Classic Fusion Tourbillon Skull watch and RJ Rromain Jerome watch collection by John M Armleder featuring skull motif are just a couple of examples. But, De Grisogono’s latest creation is the quirkiest skull watch we have ever seen. “You have to have a lot of character to wear it, because it’s quite visible,” warned De Grisogono creative director Fawaz Gruosi at a preview of the Swiss jeweler’s most recent creation, the Crazy Skull, at its new Paris showroom. According to the brand, “Crazy Skull” required almost a year of research and development and approximately 250 hours of intricate jewellery work in a subtle blend of know-how that lies within a close collaboration between master watchmakers and gem-setters, goldsmiths, diamond-cutters and polishers.

The skull-shaped watch, set with more than 890 diamonds or rubies totaling 23 carats, prompted Karlie Kloss to dub it “the most extravagant Halloween accessory” you have ever seen. “I feel a little nervous though, because there will be only 10 of these ever made,” Kloss said at the Thursday night party, admiring hers done in black diamonds. The watch also features a mechanism in which the lower jaw can be opened by a trigger revealing a tongue set with 66 pink sapphires or rubies. It took 9 months to address this one-of-a-kind mouth mechanism. The Crazy Skull is to retail between 500,000 Euros and 650,000 Euros, or $632,500 to $822,250, depending on its ingredients, at de Grisogono boutiques. 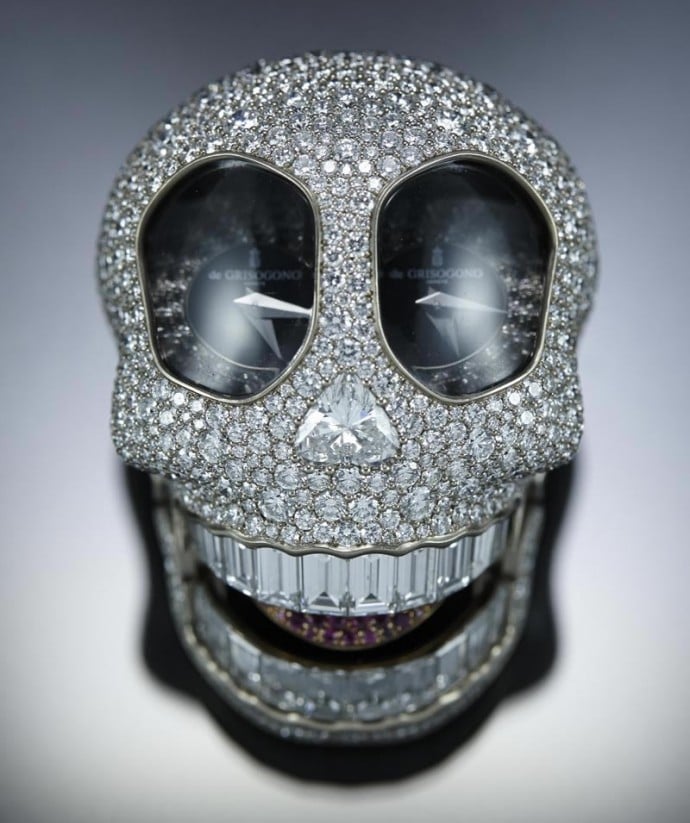