Hermès’ timepieces are growing into one of the most preferred and recognizable luxury watch brands that rank high on elegance and detail. Without a shred of doubt, its most distinctive family of watches are the Slim d’Hermès models. We believed nothing could surpass the grandeur of the Slim d’Hermès Mille Fleurs du Mexique watch that displayed skilled craftsmanship with its delicate miniature painting on the mother-of-pearl dial. The Quantième Perpétuel Platine was yet another fabulous addition to the Slim d’Hermès collection. 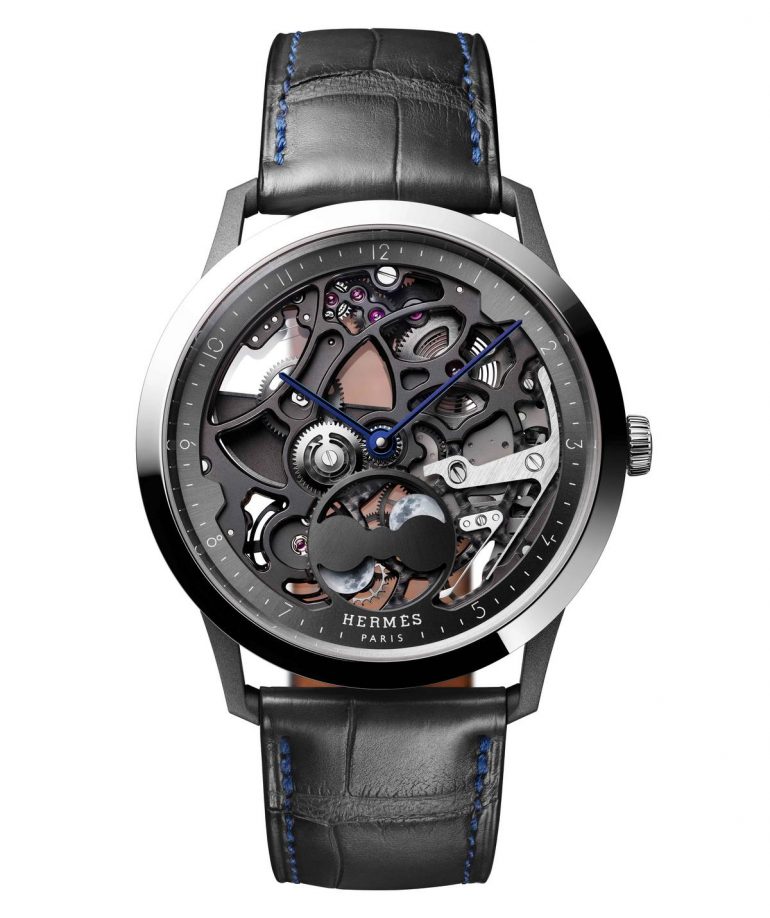 However, this time with the Slim d’Hermès Squelette Lune, Hermès that held a stellar reputation for its dial work has completely outdone itself; no just with the daring use of contrasting materials but by manufacturing the intricate skeleton dial at the fashion house’s watchmaking headquarters, Les Ateliers d’Hermès Horloger in Le Noirmont, Switzerland. Earlier, Hermès outsourced some of its more complex designs to specialists. The typical features like thin profile, tapering lugs, and thin bezels of the Slim d’Hermès models remains intact with its pure lines carved from ultra-light titanium.

It’s the first of its kind open-worked watch in the Slim d’Hermes line that flaunts a new caliber, H953, with a double moonphase display. The hours, minutes, and moon phases beat the rhythm of the ultra-thin self-winding Hermès H1953 Manufacture movement, adorned with the ‘sprinkling of Hs’ motif. The watch is a spectacular creation that is light on the wrists with a 39.5mm diameter. The Slim d’Hermès Squelette Lune sports a titanium case, 950 platinum bezel, and a crown in white gold. Adding a dash of color to the otherwise single-hued dial are sweet ruby jewel bearings between 11 and 12 o’clock in addition to the blue PVD-coated hands. A complementing, subtle matte graphite alligator leather strap completes the timepiece and is priced at $20,550.