Hermès has collaborated with British artist Alice Shirley to portray flora and fauna on its scarves since 2012. The French luxury brand even got her to come up with a fauna motif of a howling wolf for the Arceau Awooooo wristwatch last year, followed by the Arceau Into the Canadian Wild pair watches released earlier this year to celebrate Canada’s 150th anniversary. And now, the partnership between Hermès and Alice Shirley has spawned the third installment of their horological crossover – the Arceau Pocket Aaaaargh! Minute Repeater. The one-of-a-kind mechanical pocket watch combines the intricate complications of a minute repeater and a tourbillon; however, the highlight of the watch is its brightly colored cover, which is completely covered by a complex leather mosaic designed by the noted English artist. 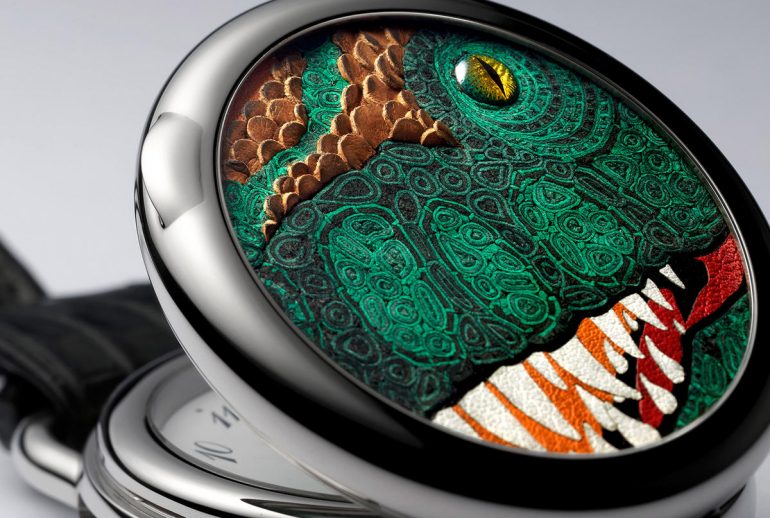 The watch cover’s vibrant motif is that of a Tyrannosaurus Rex is made using thousands of individual fragments of leather that are separately dyed and thinned to only 0.5mm. It is then hand-applied to the enameled surface along with the beautiful Grand Feu enamel eye. The other design elements of the pocket watch are rather simple. The 48mm white gold case features a polished finish, a single, wide attached wire lug supporting an alligator leather cord strap. Underneath the intricate cover is a clean white dial with an opening at six o’clock for the flying tourbillon. The pocket watch is powered by the manufacture H1924 automatic tourbillon minute repeater movement, which offers a power reserve of 90 hours and can be seen from the sapphire crystal case-back. If you notice closely, the movement has also been customized to match the dinosaur theme. The bridges are open-worked, and a T-Rex silhouette can be noticed incorporated on the barrel bridge. This is a one-of-a-kind piece, and we have been told that the Arceau Pocket Aaaaargh has been priced at $338,000. 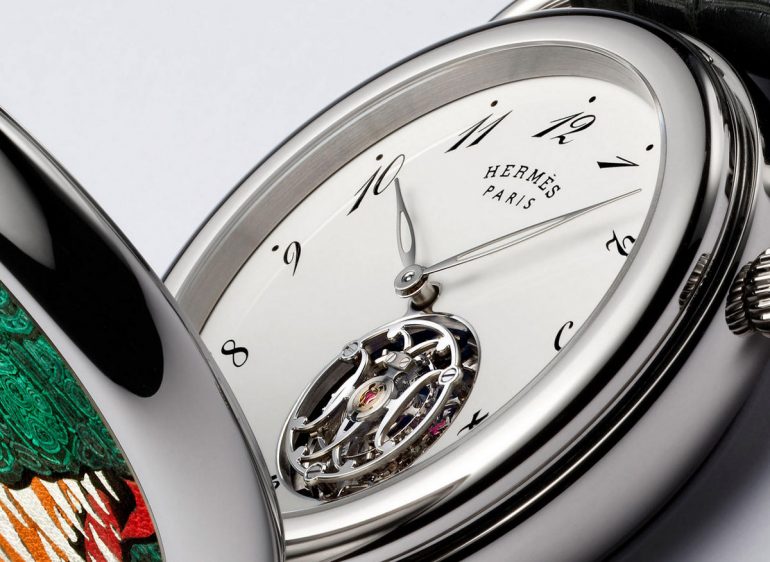