Luxury watch brand Jacob & Co. has partnered with Universal Pictures to create a limited-edition timepiece that is inspired by the Fast & Furious film saga. Called the Fast & Furious Twin Turbo, the special edition Jacob & Co. timepiece celebrates 20 years of one of the most successful movie franchises of all time and has been revealed just a few days before the theatrical release of F9 – the latest installment in the Fast & Furious series. Priced at $580,000, the limited-edition watch is based on the brand’s highly complicated Twin Turbo Furious, which has also been previously used as a base for collaborative pieces for Bugatti. 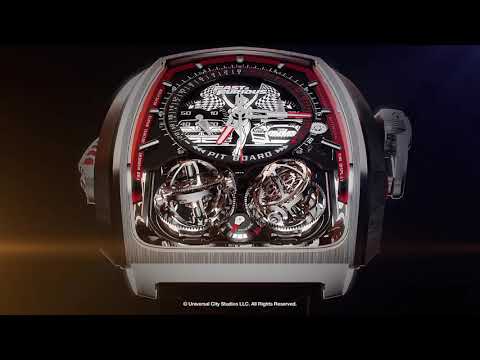 The new Fast & Furious Twin Turbo watch features an 88-part forged carbon case with a brushed steel bezel. The carbon case is contrasted with bright red accents across the watch that give it a sporty appearance. The sapphire crystal dial boldly features an image from the first 2001 Fast & Furious movie that shows a “starting” girl with two checkered flags standing in front of what looks like Dominique Toretto’s Charger and Brian O’Conner’s Toyota Supra. The Fast & Furious logo is placed right at the top of the dial.
Powering the watch is the stunning Jacob & Co. caliber JCFM05. The manually wound movement consists of a whopping 832 components and gets two triple-axis tourbillons that continually rotate at speeds of 24, 48, and 180-seconds respectively for each axis. The movement also has a decimal minute repeater complication. “Our Twin Turbo Furious is such a natural fit for the Fast & Furious franchise,” Benjamin Arabov, Jacob & Co. CEO, said in a press release. “Not only the name of our watch but the whole emphasis on speed and being exceptional. Jacob & Co. has been in many important and successful partnerships, but we have never partnered with an entity that so closely fits our DNA. The new Fast & Furious Twin Turbo Furious watches are going to be awesome.” Only 9 examples of the Fast & Furious-themed limited edition will be made and will be available for purchase on June 25, the same day the movie releases in the US.
Tags from the story
Jacob-and-Co, Special-Edition