It was in 2016 when Bugatti had revealed the 1500hp Chiron at the Geneva Motor Show as a replacement for the Veyron. After nearly six years, Bugatti announced that the hypercar has entered the final phase of its production run and all the 500 units promised to be built by the French manufacturer have been sold. This marks the beginning of a new chapter for Bugatti. But before its replacement arrives, the Bugatti Chiron should be celebrated. The 3-year-old partnership between Bugatti and watchmaker Jacob & Co. has spawned several special timepieces as a tribute to the Chiron. The newest collaborative timepiece is a one-off that’s just as stunning as complex as the French hypercar. Meet the Bugatti Chiron Blue Sapphire Crystal watch that costs a whopping $1.5 million.

The new Jacob & Co. watch for Bugatti is a new iteration of the Bugatti Chiron Sapphire Crystal piece that came out last year. This time around, the sapphire crystal case of the watch is in blue color which is achieved 17 difficult to mine metallic elements to get that special tint. Incredibly, the case is made of a single block of sapphire crystal case. Cutting and polishing sapphire crystal is a very difficult and delicate job and it can take a few months to make one case. However, the result of all the hard work is something that’s extraordinarily beautiful. The transparent sapphire case offers an unhindered view of the movement inside the watch from all angles. 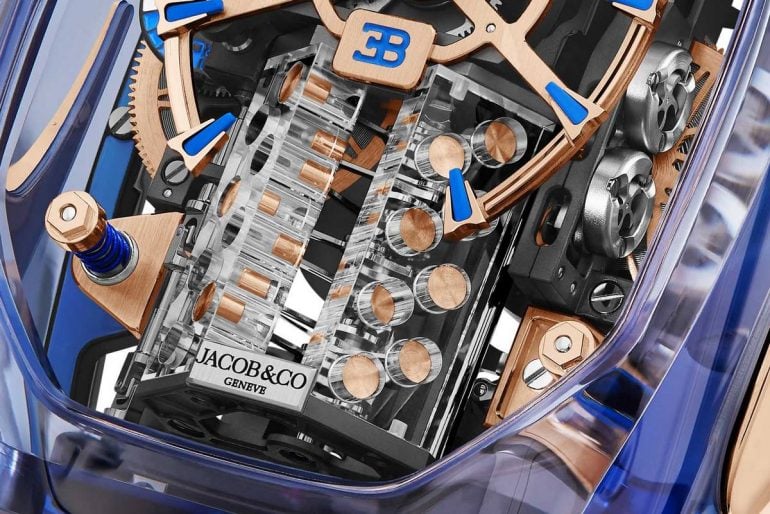 Housed inside the tonneau-shaped case is the JCAM37 manual wound caliber. The movement is completely suspended in four places just like an automobile. Thanks to the complete transparency of the case, the unique suspension can be seen working along with every part of the 578 hand-decorated and hand-assembled components of movement.


One of the highlights of the watch is the miniature version of the Bugatti 16-cylinder engine that can be seen on the bottom end of the dial. Pressing the push start crown brings the miniature engine to life. Watching the 16 pistons do their dance inside the transparent engine block is magical. 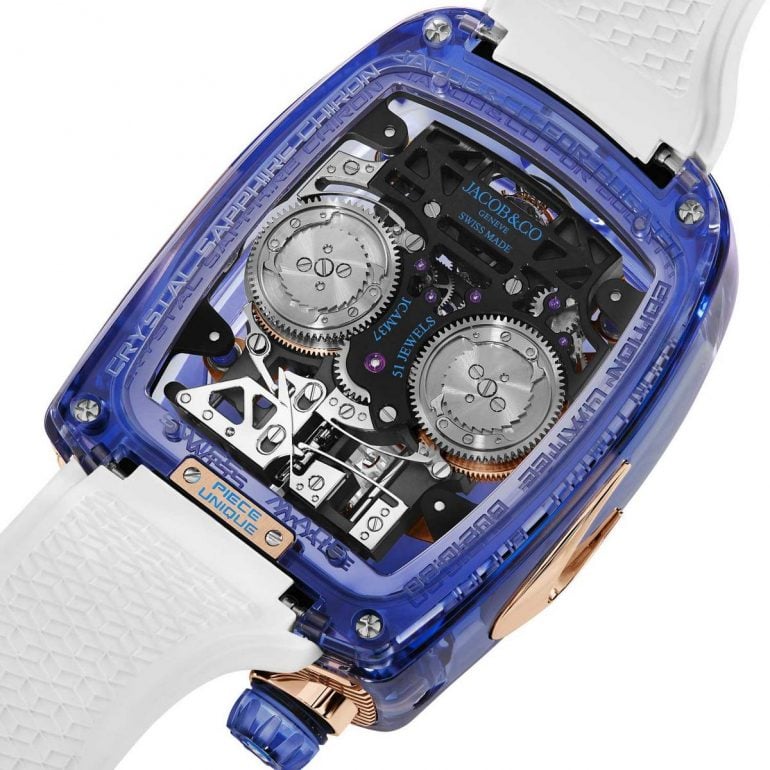 “At Jacob & Co., we are always developing luxury watches which no one else can imagine,” said Jacob & Co. CEO Benjamin Arabov in a statement. “With the Bugatti Chiron Tourbillon timepiece, we have done something no one has ever even attempted before, create the world’s first true engine on the wrist.” 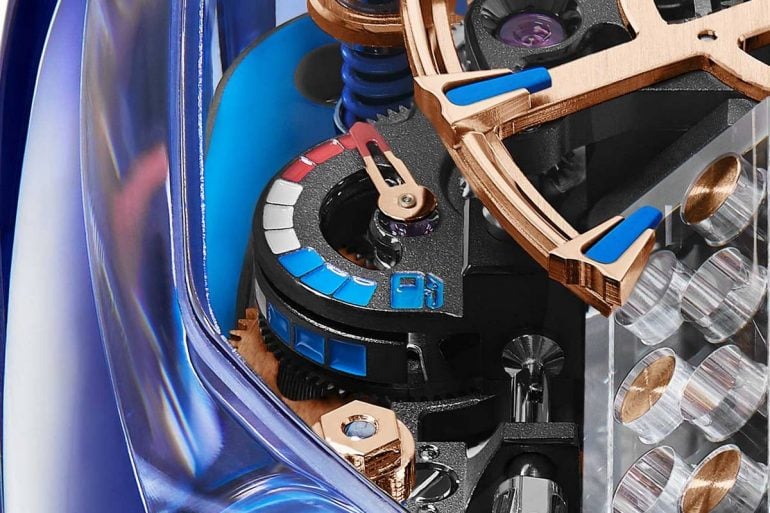 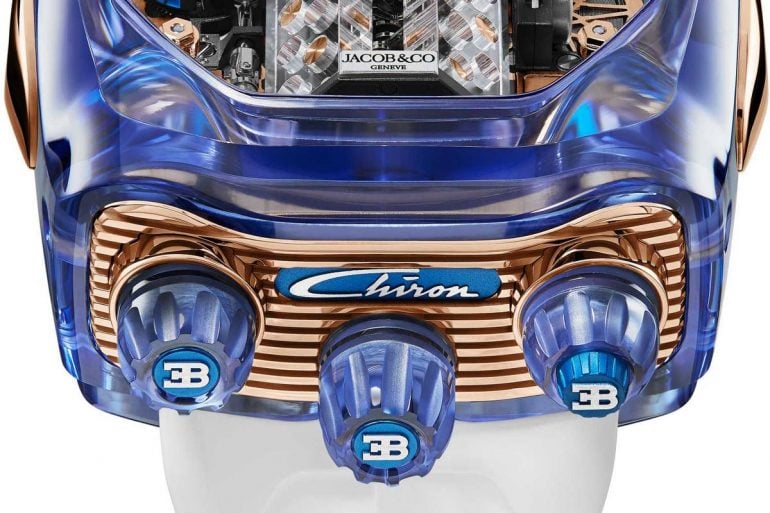 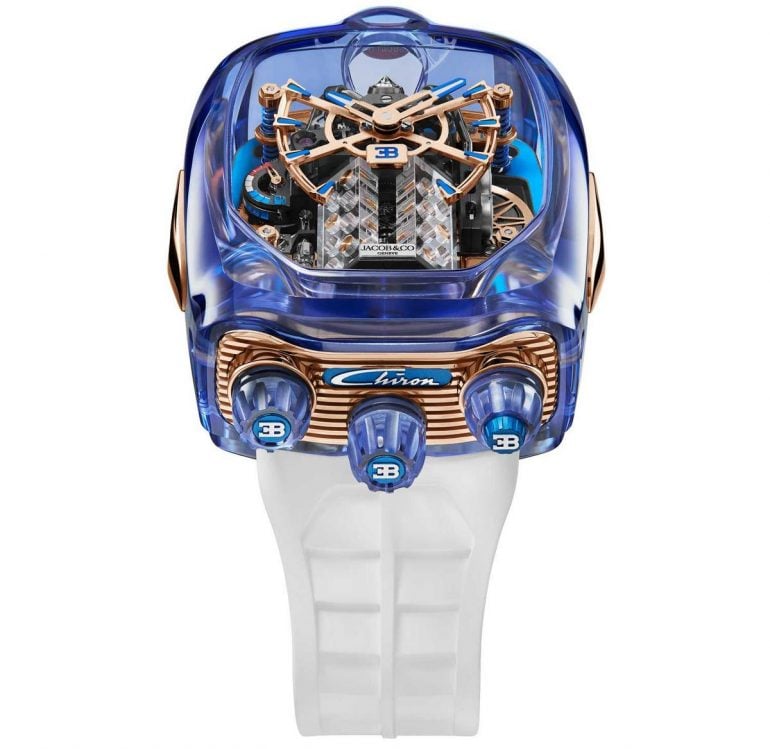 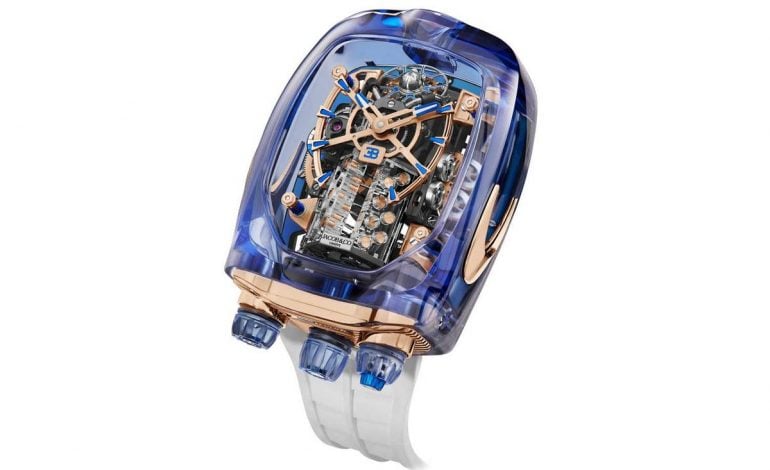