At the Baselworld 2019, Rolex has introduced several of its classic models with fresh tweaks and updates; however, the one that has arrived with the most number of novelties is the new Yacht-Master 42. The name Yacht-Master was first used by Rolex in the 1960s on a nautical-inspired Daytona, which remained as a concept and never entered production. But, it was in 1992 when Rolex released the first generation Yacht-Master model, which was launched in yellow gold with a white dial. Since then, the sea-inspired sporty watch has constantly been updated with different sizes, materials, and design tweaks. For 2019, the Yacht-Master has undergone the boldest revamp till date. Although, it has several aesthetic elements inspired by the Everose version from 2015, however, it looks fresh and thoroughly updated. 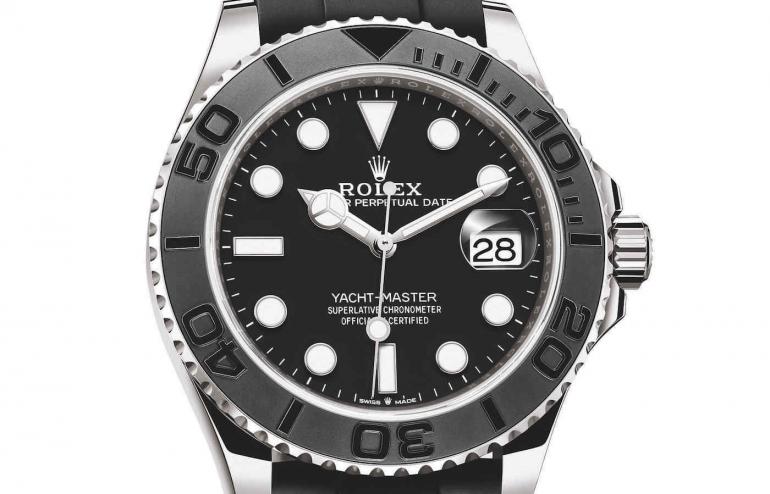 The biggest change comes in the form of an upsized case, which now measures 42mm instead of 40mm – the largest yet. This change further helps it stand out from the Rolex Submariner model. The new Rolex Yacht-Master 42 ref. 226659 is currently available only in white gold, with more version expected to be launched over the next few years. The larger sized case houses Rolex’s new-gen 3235 movement, which has an efficient gear train, Chronergy escapement and a longer power reserve of 70 hours. The new version features a bidirectional Cerachrom bezel rendered in black and with bold 60-minute inserts. The dial is also in black with the hands, indexes and inscriptions in a contrasting white, without a hint of color. Matching the theme is Rolex’s fantastic rubber bracelet OysterFlex that features metal blades inside. It also has the Rolex Glidelock extension system. Revealed alongside several other updated model at the Baselworld 2019, the new Rolex Oyster Perpetual Yacht-Master 42 will be available later this year with a price-tag of CHF 26,500 (roughly $26,700 USD).

Tags from the story
BaselWorld-2019, Rolex