Only Watch, the celebrated biennial charity auction, has announced the itinerary for its 9th edition, along with revealing the list of participants. It’s bigger than ever, with 54 of the world’s top watchmakers participating in supporting the cause. The Only Watch charity auction was started 16 years ago to benefit research into Duchenne muscular dystrophy. It was set up by the former managing director of the Monaco Yacht Show, Luc Pettavino, whose late son suffered from the disease. Over the last eight editions, the charity auction has managed to raise close to $83 million, making it one of the biggest events of its kind in the watch industry. As is tradition, the collection of one-off timepieces created by these watch brands will begin a world tour in the weeks preceding the auction. We have picked nine of the most desirable bespoke watches that will go under the hammer at the Only Watch 2021 auction scheduled for 6 November in Geneva. 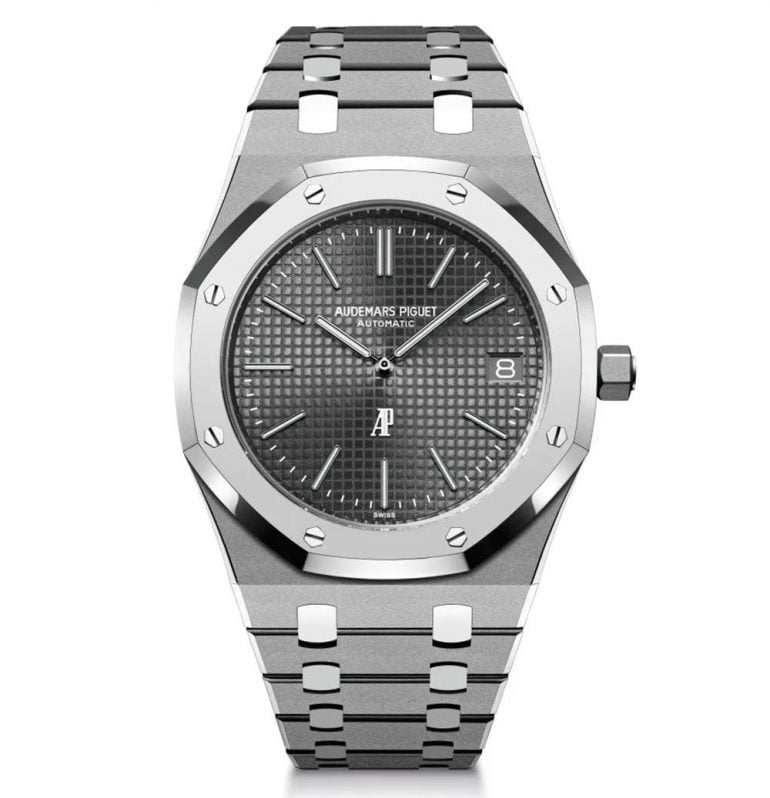 Audemars Piguet
First on our list is Audemars Piguet’s dedicated Royal Oak “Jumbo” Extra-Thin. The timepiece created for Only Watch 2021 will be the last unique edition of the ref. 15202. Additionally, it will also be the last unique piece to be powered by the cal. 2121 – the ultra-thin automatic caliber that was first introduced on the Royal Oak in 1972. The case and bracelet are made of sandblasted titanium with polished Bulk Metallic Glass – a first for AP. On the other hand, the Petite Tapisserie dial gets the original Royal Oak’s typography for the signature and monogram as a tribute. 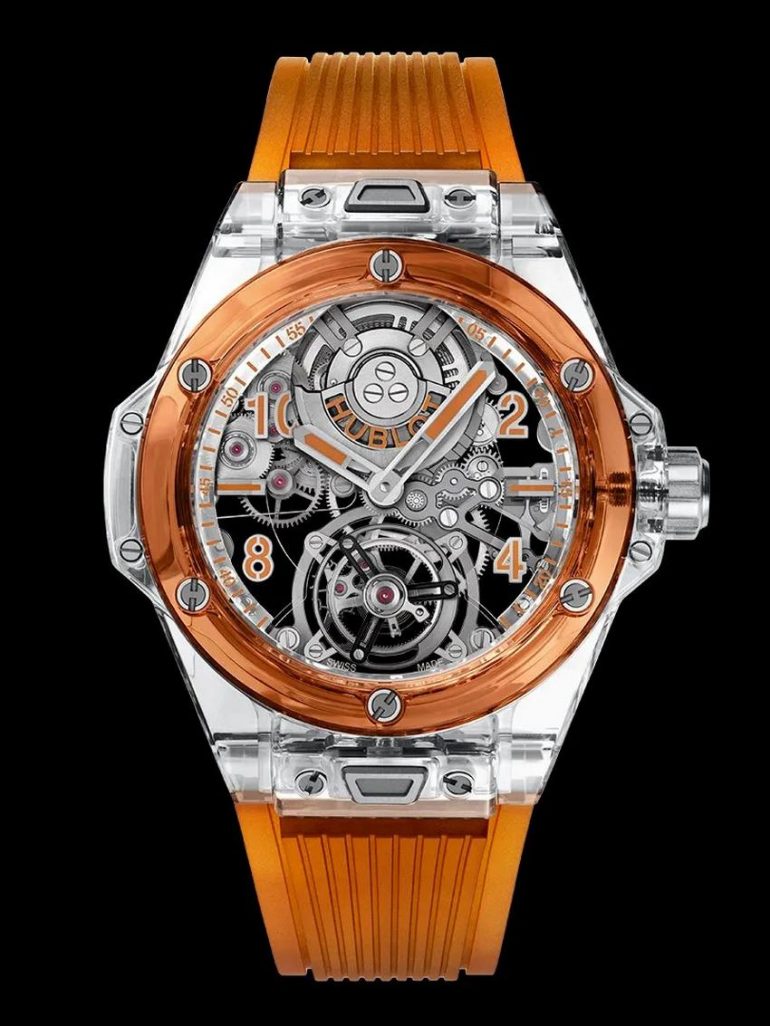 Hublot
As a tribute, the Hublot Big Bang Tourbillon Only Watch features the distinct color codes of the Only Watch 2021. The unique timepiece gets a 45mm made case made out of transparent and orange-colored sapphire. For the illusion of complete transparency, the innovative self-winding movement uses sapphire crystal bridges, while the Only Watch logo appears on the transparent caseback. The Hublot timepiece comes with two interchangeable rubber straps.
Estimate: CHF 160,000 – 180,000 (about $173,000 – $194,000 USD) 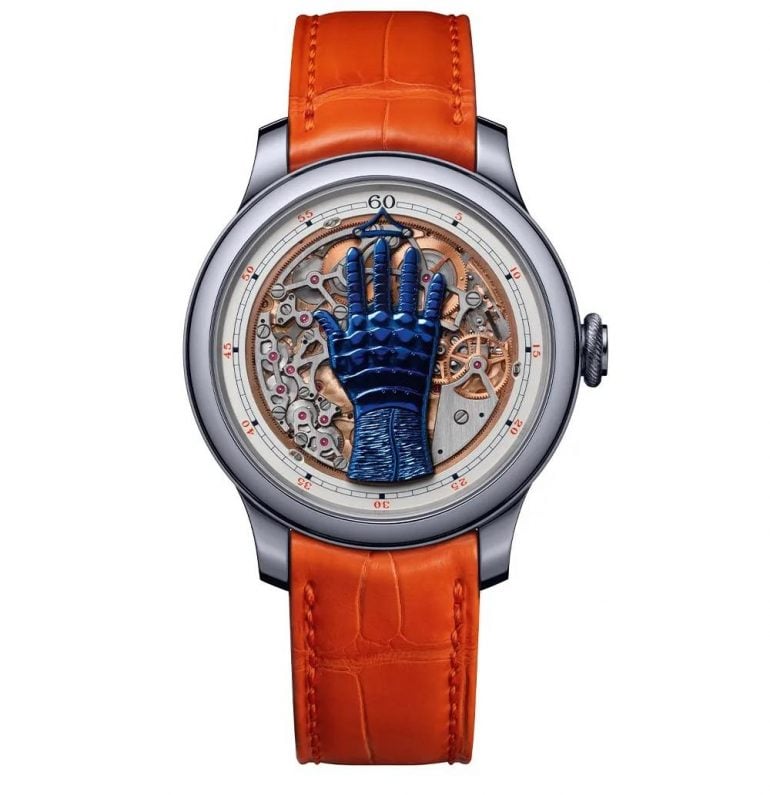 F.P. Journe
Regular Only Watch participant F.P. Journe has partnered with legendary film director Francis Ford Coppola to create a stunning Octa Caliber 1300-based automaton watch. The idea for the incredibly complex piece was hatched in 2012 over dinner at Coppola’s home in the Napa Valley. Coppola asked if time could be indicated using the outline of a human hand. The fingers of the bright blue gauntlet on the center of the dial instantly appear or disappear in various positions to tell time.
Estimate: CHF 300,000 – 400,000 (about $324,000 – $432,000 USD) 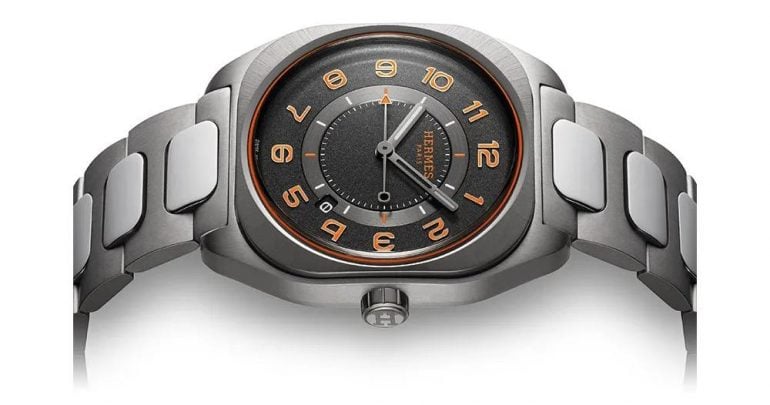 Hermès
The two Hermès watches for Only Watch 2021 are based on the newly launched H08 flagship collection of men’s watches. Instead of a single timepiece, Hermès has created a pair of watches that come housed in a single presentation box. The watches are in titanium and PVC, and both feature black gold dials with unique orange highlights. While one of them is paired with a titanium bracelet, the other is fitted with an orange rubber strap.
Estimate: CHF 14,000 – 18,000 (about $15,000 – $19,000 USD) 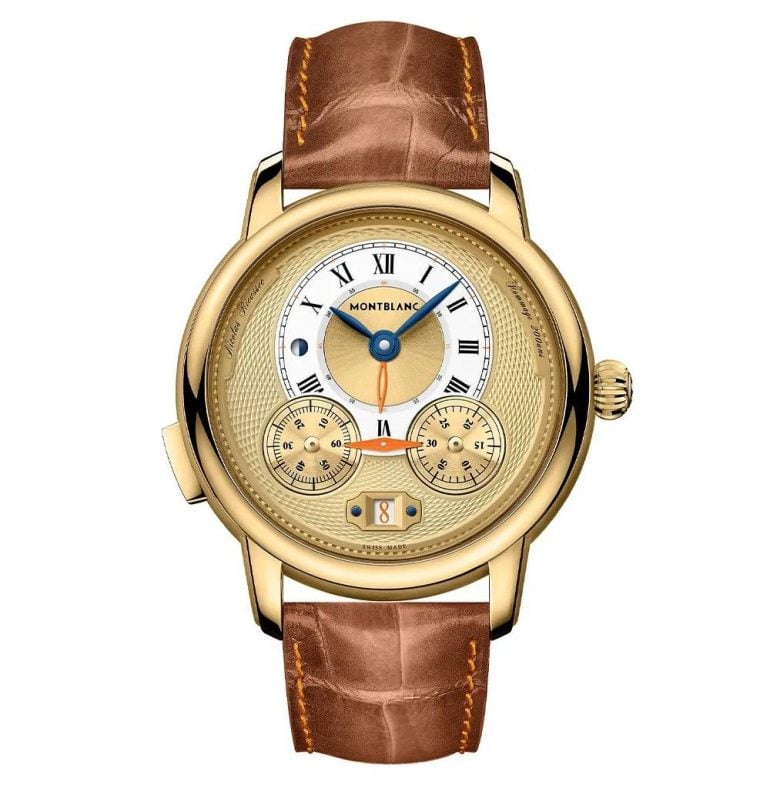 Montblanc
The Montblanc Star Legacy Nicolas Rieussec Chronograph Only Watch ’21 Unique Piece pays tribute to the charity auction along with celebrating the 200th anniversary of the world’s first inking chronograph created by legendary French watchmaker Nicolas Rieussec. The watch that comes in a 43 mm 18 K yellow gold case will be auctioned along with a wooden replica of the historical chronograph from 1821. Along with subtle orange touches on the dial as a nod to the charity auction, the caseback is also engraved with “Only Watch Unique Piece.”
Estimate: CHF 30,000 – 45,000 (about $324,000 – $490,000) 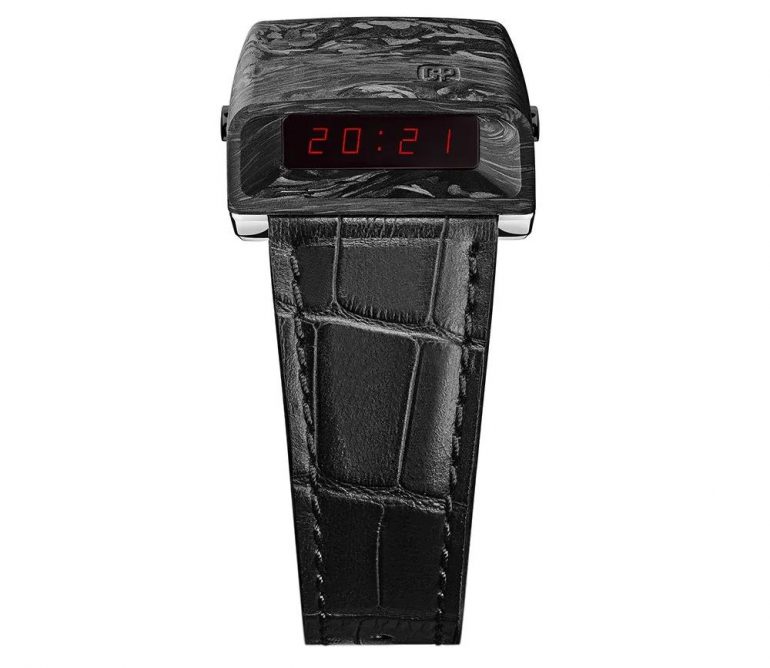 Girard-Perregaux
Girard-Perregaux has revived the iconic Casquette timepiece from the 1970s in partnership with Bamford Watch Department. The Casquette was one of the first digital watches from a high-end watchmaker, and the Only Watch piece pays tribute to the original with its unique case, which is made from forged carbon and titanium. It might be the most affordable option in the Only Watch collection for 2021, but its carbon case with the tubular LED display definitely makes it a worthy collectible.
Estimate: CHF 10,000 – 20,000 (about $11,00 – $22,000 USD) 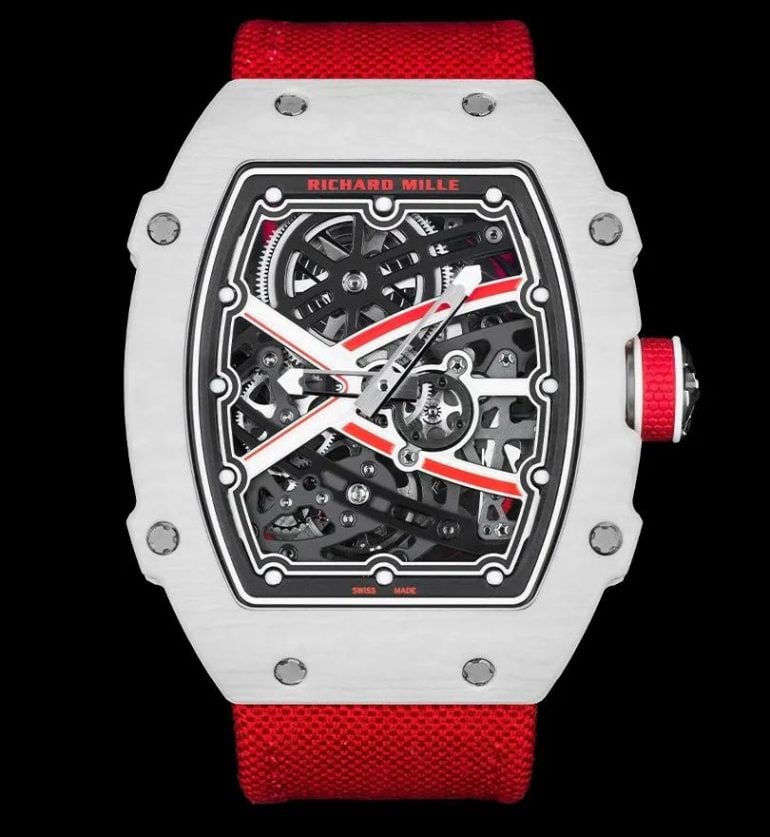 Richard Mille
Richard Mille’s timepiece for Only Watch 2021 was developed for Formula One racing driver Charles LeClerc. The RM 67-02 Prototype features a white and red theme that reflects LeClerc’s Monaco flag colors. The tonneau-shaped case is crafted in Richard Mille’s proprietary Quartz TPT for extraordinary shock resistance, while the watch is fitted with the lightest strap the brand has ever created. Additionally, this piece is also the lightest automatic watch in its line-up.
Estimate: CHF 270,000 – 330,000 (about $292,000 – $356,000 USD) 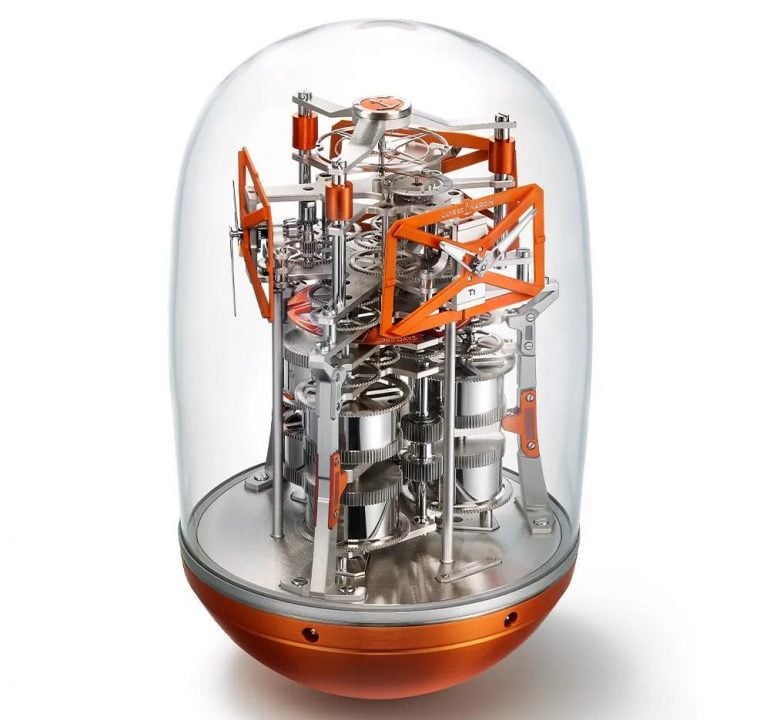 Ulysse Nardin
Swiss watchmaker Ulysse Nardin’s piece for Only Watch 2021 isn’t a wristwatch but a unique iteration of its stunning UFO table clock. Launched in April 2021, all the 75 pieces of the Ulysse Nardin UFO were sold out in no time. The exquisitely crafted timepiece to be auctioned features an orange anodized finish and offers another chance to those who missed the opportunity to buy the Avant-Garde clock. It is also one of the most innovative pieces in the Only Watch 2021 collection.
Estimate: CHF 60,000 – 80,000 (about $65,00 – $86,000 USD) 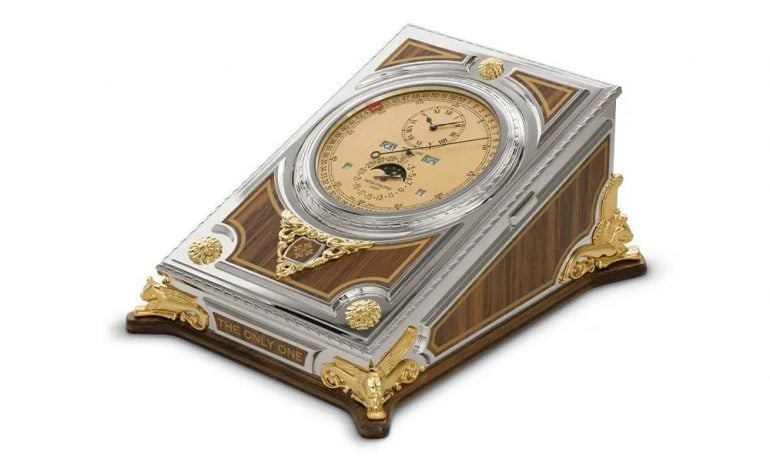 Patek Philippe
Back in 2019, the Patek Philippe wristwatch exclusively created for the Only Watch auction created a new sale record by becoming the most expensive watch ever auctioned at $31 million. However, the iconic watchmaker has followed it up with a complicated table clock. The Ref. 27001M-001 is inspired by a desk clock delivered to James Ward Packard in 1923, now preserved in the Patek Philippe Museum. The exceptional Grande Complication features a perpetual calendar, moon phases, week-number display, and a power-reserve indicator. The desk clock is equipped with the new caliber to 86-135 PEND IRM Q SE with a power reserve of 31 days. The case is sterling silver with America Walnut inlay.
Estimate: CHF 400,000 – 500,000 ($432,000 – $540,000 USD).