Rolex watches are synonymous with many things including money, hedonism, diamonds, gold, you know the rest. What they aren’t easily associated with is pizza. But if that’s the case, why is this Rolex sporting the red white and blue logo of everyone’s guilty pleasure pizza chain: Domino’s?

The short answer is because these specially created watches served as incentives for employees of the pizza chain. In 1977, Domino’s Pizza founder and CEO Tom Monaghan once gave a high achieving employee the watch right off his wrist! In Pizza Tiger his autobiography, Monaghan wrote, “I wore a Bulova with our Domino’s logo on its face. A franchisee asked what he had to do to get that watch from me, and I told him, ‘Turn in a twenty-thousand-dollar sales week.’ He did it.” 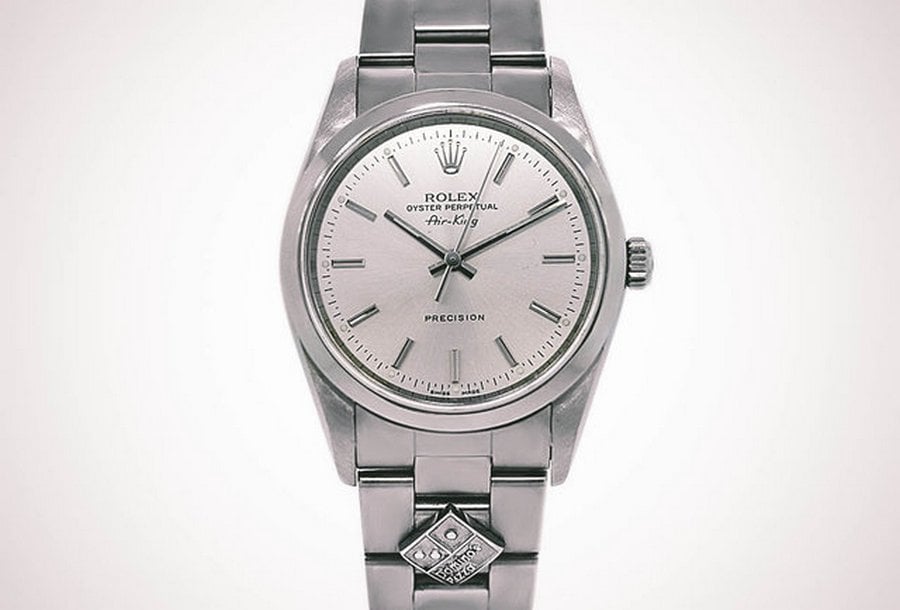 After that, the enterprising founder started giving away Seikos to high-performing employees which soon turned into $800 Air King Rolexes. Known as the “Rolex Challenge” the practice included the award of a Rolex for employees who manage to turn in $20,000 sales in a week. Air Kings were eventually discontinued in 2014.

These days you have to work a lot harder to snag a watch if you work at Domino’s. The requirement now is to turn in $25,000 sales for four weeks in a row. The prize has also enjoyed an upgrade. Instead of a Domino’s logo on the dial, you’ll now find a metal version of it on the bracelet.