It’s simply incredible the kind of things you can find on eBay for sale. After stumbling upon a V12 Ferrari Formula 1 engine from the ‘90s and a baby Tyrannosaurus Rex fossil which was available for $2.95 million, now we have come across a listing for a giant 16-foot battle robot that looks straight out of a sci-fi flick. In fact, the true nerds might actually recognize it as the Eagle Prime robot that took part in giant robot fights under the banner of the American team MegaBots. The company has run out of money and has gone bankrupt, forcing it to auction the 16-foot battle robot on eBay as a part of the shutdown process. According to the company, the Eagle Prime robot is in tip top condition and includes weapon attachments, CAD files and a shipping container full of parts. The robot is fully functional but has battle scars and some worn-down plastic pads from its fighting days. 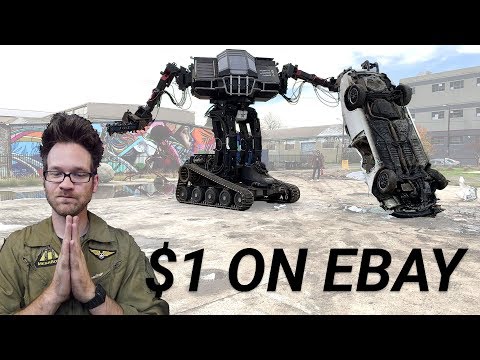 MegaBots co-founder Matt Oehrlein says the company simply couldn’t afford the support costs and had to shut shop. The company is selling all its assets to pay the bank as much as possible before formally filing bankruptcy. It took close to $2.5 million just to build the robot, which was funded primarily through crowdfunding. It weighs 15 tones and is powers by a Corvette engine. The bidding started at just $1 but now has reached to $162,900 at the time of writing. However, before you jump to make your bid, remember that it could cost anywhere between $4000 to $17,000 to ship it in the USA, which could swell to $50,000 if it has to be shipped abroad. If you have that kind of money, and enough space for this beast to play, what are you waiting for?

Tags from the story
eBay, Robotics