If De Beers Cullinan Blue sells for more than its estimated price of $48 million, it will be the most valuable blue diamond to ever feature at an auction. Sotheby’s will put up the newly mined vivid blue stone for auction in Hong Kong this April. According to a press release from Sotheby’s, ‘The 15.10-carat gem is also “the largest internally flawless step-cut vivid blue diamond” to be appraised by the Gemological Institute of America.’ This gorgeous stone was first discovered in April 2021 at the South African Cullinan mine, one of the very few places in the world to discover rare blue gems. New York Post shared, “Blue diamonds of any kind are rare on the market, but this is the rarest of the rare; nothing of remotely similar caliber has appeared at auction in recent years,” said Chairman of Sotheby’s Asia Patti Wong. 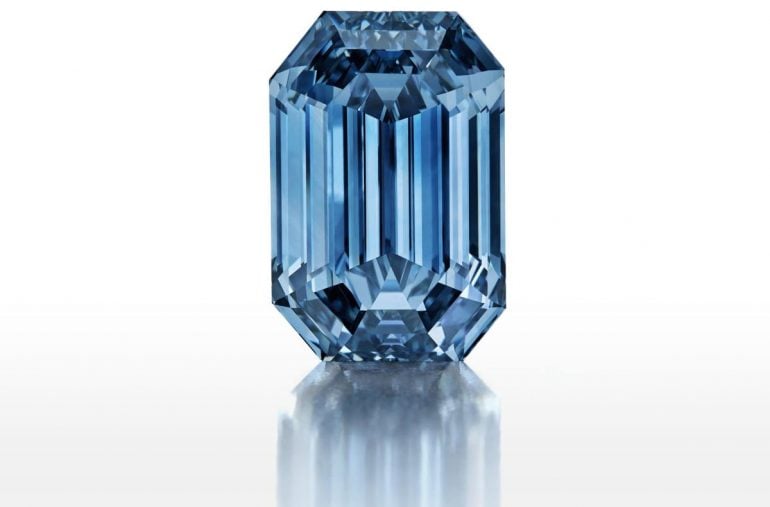 The auction house also emphasized the rarity of this gemstone as only five gems over 10 carats have ever appeared at auction. Out of these five, none have crossed over 15 carats. This feat adds to the vivid blue diamond, making the flawless gem a scarce object. The most expensive diamond sold at an auction was the blue stone Oppenheimer diamonds. It went under the hammer for $57 million at Christie’s Magnificent Jewels auction in Geneva in 2016.

The Cullinan Blue diamond was purchased for $40 million jointly by De Beers and the Diacore diamond cutting operation. Their master cutters spent practically a year faceting and buffing the stone into a perfect 15.10-carat step-cut diamond. The Gemological Institute of America graded it as vivid blue, the highest possible grade for colored diamonds, bestowed on less than 1% blue diamonds in the world. Wong says there is strong international interest in the De Beers Cullinan Blue. “People are knowledgeable today, they collect across categories, and they know what they want. Some clients will enjoy wearing the diamond, she says, and others want the pride of ownership. It’s the most beautiful blue diamond I’ve seen in my career,” says Wong. “I won’t likely see another like this again.”