Every year celebrated auction house Christie’s reveals their most expensive auction sales. The year of 2018 saw a lot of passion and love for masterpieces and their maestros, from Picasso to Monet.

Pablo Picasso Fillette à la corbeille fleurie topped the list with an auction bid of a USD 150 million at the Christie’s auction house in 2018. The recently unveiled list entails an Edward Hopper painting, Claude Monet, Nymphéas en fleur and Constantin Brancusi, La jeune fille sophistiquée amongst the others, and we’ve decided to delve into the details. 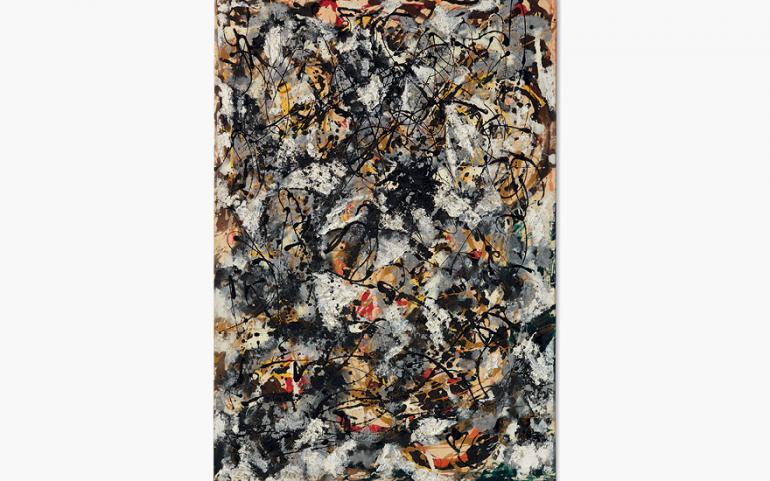 10. Jackson Pollock, Composition with Red Strokes – USD 55,437,500
Pollock’s Composition with Red Strokes was painted in 1950. Brimming with artistic swirls and streaks of bright colour, the painting is bursting with complexity and energy. The fluid lines of paint represent Pollock at the height of his creativity. Some noticed his strokes were in fact very deliberate and precise.

Hans Namuth, the photographer who documented Pollock’s working practice, recounted the artist would, “take his stick or brush out of the paint can and then, in a cursive sweep, pass it over the canvas high above it, so that the viscous paint would form trailing patterns which hover over the canvas before they settle upon it, and then fall into it and then leave a trace of their own passage. He is not drawing on the canvas so much as in the air above it”

9. Su Shi, Wood and Rock – USD 59,505,899
The beautiful Wood and Rock” is an ink-on-paper and is part of an extended scroll with calligraphy by Mi Fu — a renowned contemporary of Su. The current record for an Asian work at auction is USD 64 million, which was the price tag for a hand scroll sold in Poly International Auction’s Beijing 2010 sale.

Christie’s estimate for the Su scroll is in excess of USD 51 million, not including any additional costs. 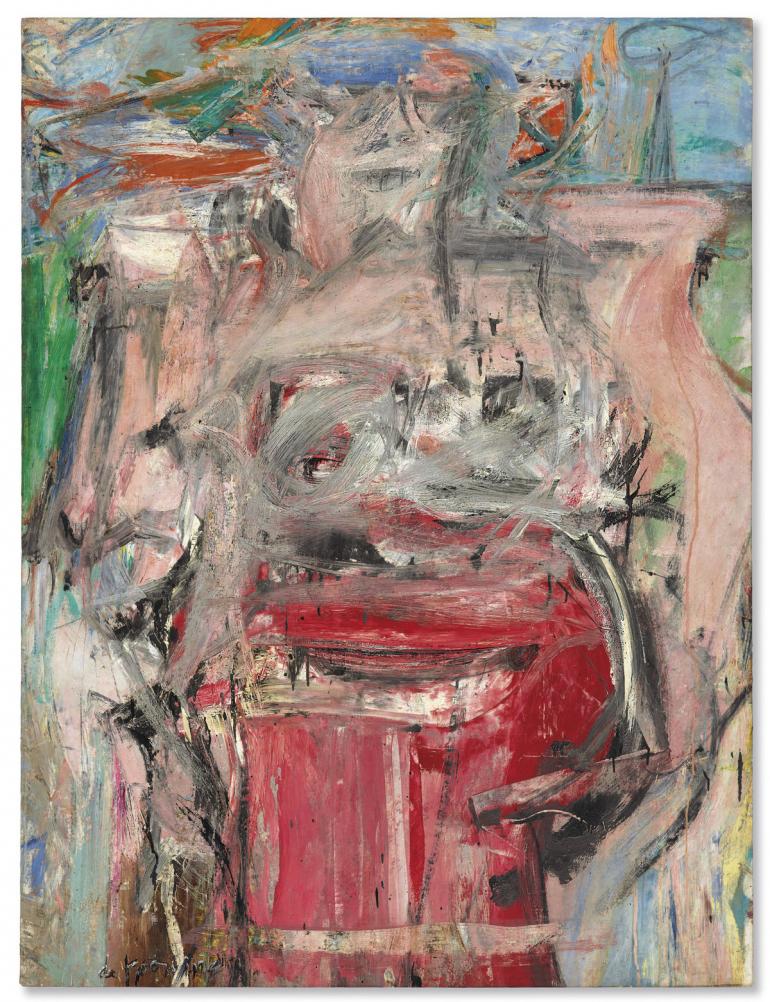 Measuring over five-and-a-half-feet tall, Woman as Landscape ranges from broad sweeps of colour to the broad edge of a palette knife. The other anatomical features of her figure are defined by the rapid movement of the artist’s brush, carving out breasts and other erogenous zones from the central body of the figure. 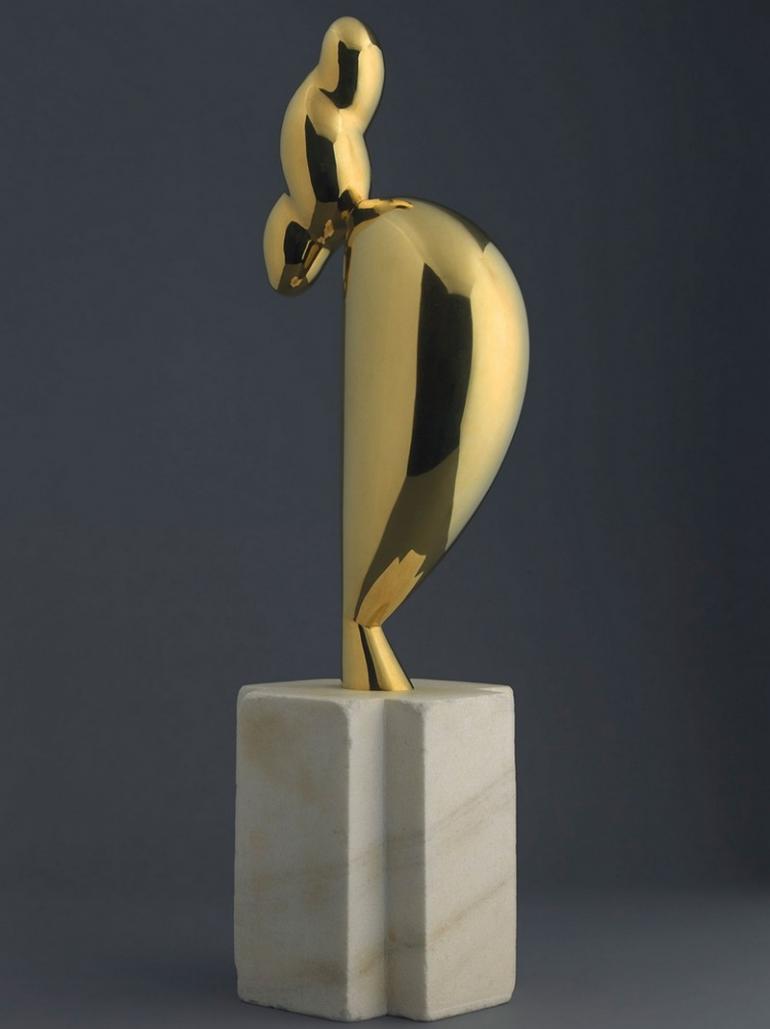 Inspired by a blue-eyed English heiress, the work features the head of a woman with a ponytail. American couple Elizabeth and Frederick Stafford were in Paris in 1955 when they bought the work directly from the artist for about USD 5,000. Brancusi set the last selling record last year, when one of his works, “La muse endormie” (1913) was sold with USD 57.4 million, which was an auction record for the Romanian-born artist. 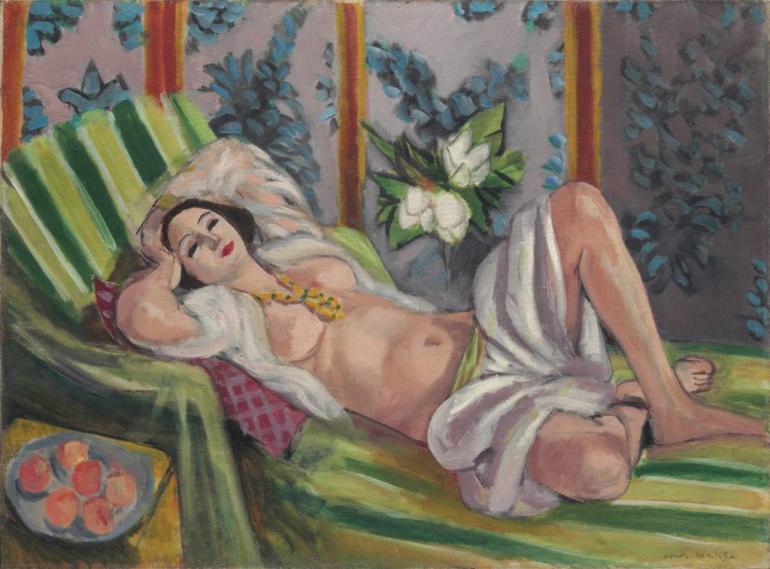 6. Henri Matisse, Odalisque couchée aux magnolias – USD 80,750,000
In 1958, the Rockefellers had acquired the Matisse, a painting depicting one of his most frequent models of the period, the dancer and musician Henriette Darricarrère.

Henri Matisse’s Odalisque couchée aux magnolias (1923) went for USD 80.8 million. It took only three minutes to sell the piece of work. Christie’s had estimated a cool USD 70 million for the artwork; it hammered for USD 71.5 million. The final price includes buyer’s premium. 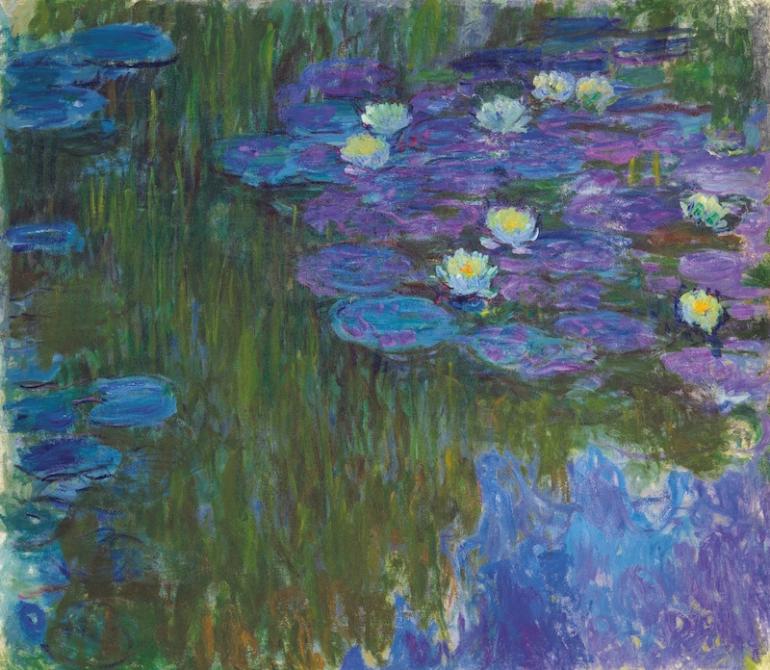 The artwork was acquired by the Rockefellers in 1956 from Galerie Katia Granoff through the Knoedler & Co. gallery. Granoff had obtained the painting via Monet’s son, Michel. 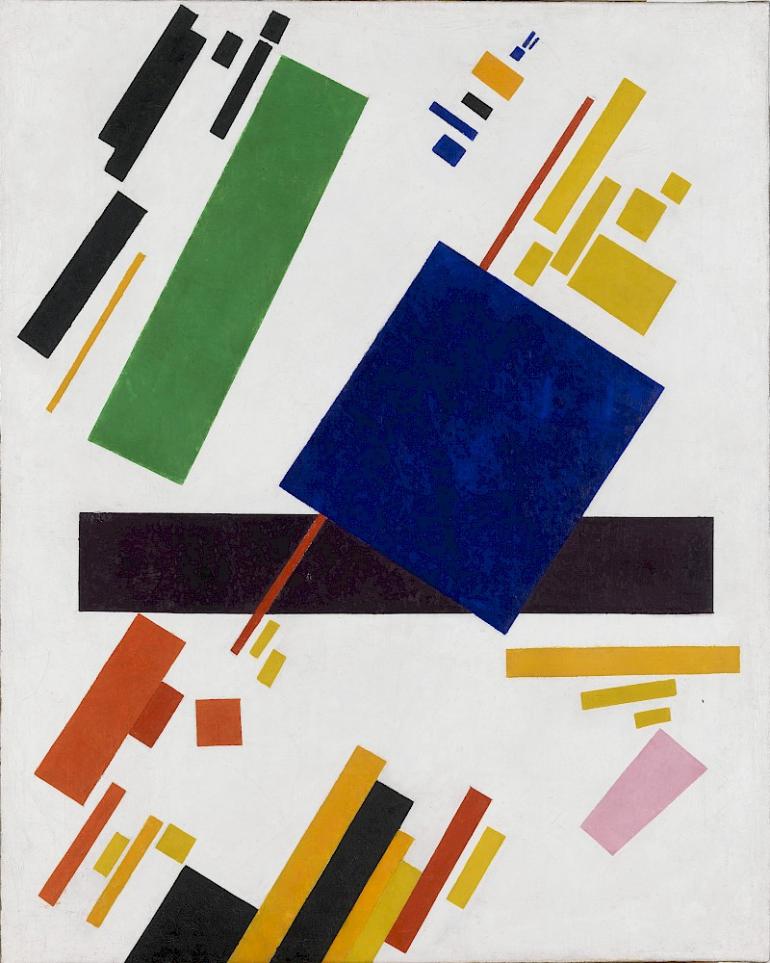 Suprematist Composition is an icon of Russian art, even though it had been banned for years by the Soviet government. The painting depicts a number of rectangles in bright colours. The colours most represented in the painting are blue, black, green, yellow, orange, red, and pink. Another name for the painting is also Blue Rectangle Over Red Beam, a very accurate description of the painting in real terms. 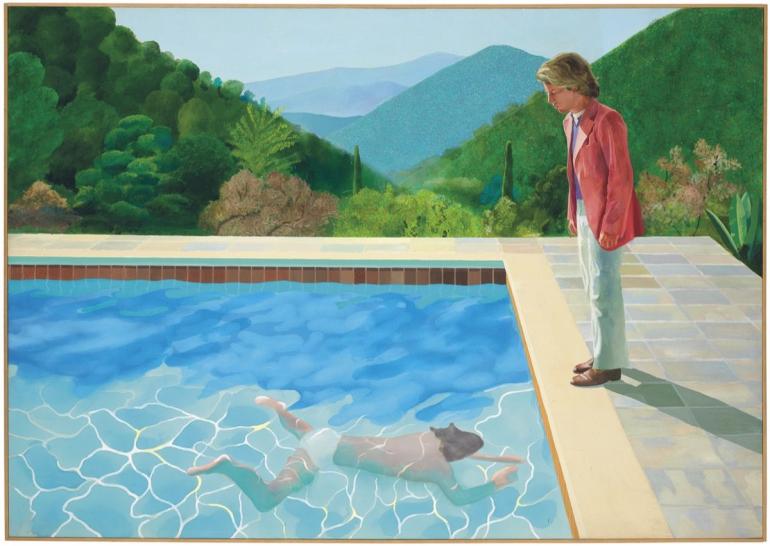 3. David Hockney’s Portrait of an Artist – USD 90,312,500
David Hockney’s “Portrait of an Artist (Pool with Two Figures)” was auctioned at Christie’s Post-War and Contemporary Art Evening Sale in New York City for a record USD 90 million by an anonymous purchaser. Previously owned by billionaire record exec David Geffen, Hockney started the painting in October 1971, but abandoned the first version of the canvas months later.

In April 1972, Hockney started over with the hope of completing the masterpiece in time for a planned exhibition in New York City the following month. English filmmaker Tony Richardson’s villa in the South of France inspired his work, where he took hundreds of photographs of the villa’s pool and breathtaking view. 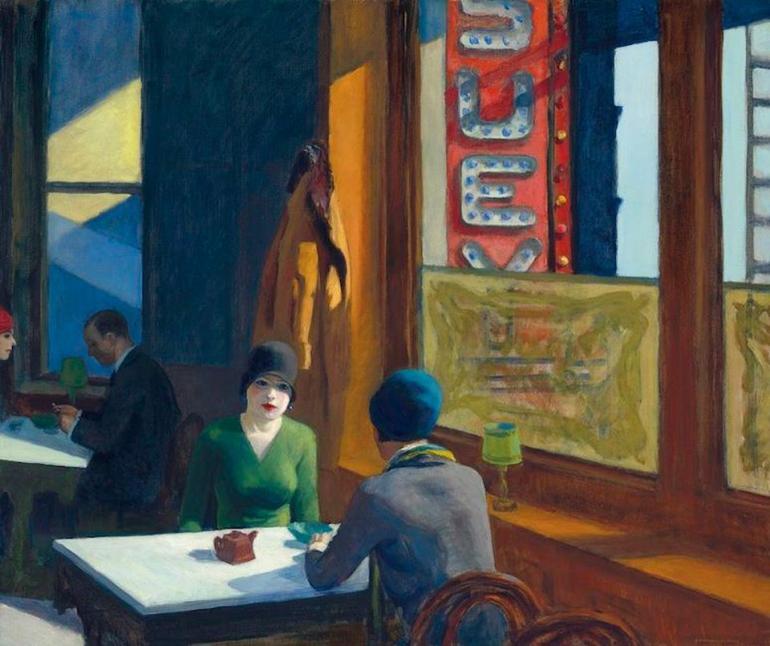 2. Edward Hopper’s Chop Suey – USD 91,875,000
Edward Hopper’s 1929 oil painting Chop Suey fetched USD 92 million, becoming the most expensive traditional American painting Christie’s has ever sold. The painting was from the collection of collector estate and tourism mogul Barney A. Ebsworth, who died in April.
Chop Suey depicts a colourful scene set in a restaurant—based on one near Columbus Circle in Manhattan, where Hopper and his future wife, Josephine, often visited while they were dating. The painting entails strong lines and vivid bursts of color. Interestingly, Chop Suey was last seen in the blockbuster Hopper exhibition at Paris’s Grand Palais which became the museum’s second-most-visited exhibition ever. 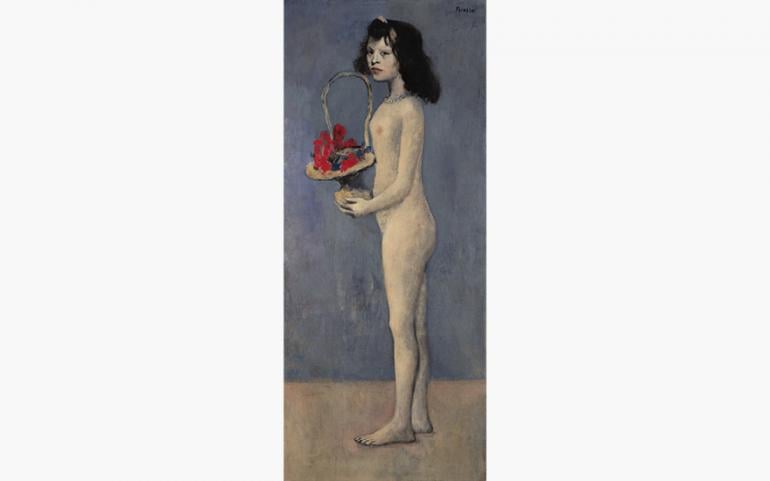 1. Pablo Picasso Fillette à la corbeille fleurie – USD 115,000,000
Pablo Picasso’s Fillette à la corbeille fleuri, better known as the Young Girl with a Flower Basket was painted in 1905. The bidding commenced at USD 90 million and spiraled quickly to USD 100 million, then USD 102 million. And after a few minutes, the sale was final. The final price, with buyer’s premium included, came to USD 115.1 million.

The painting dates back to 1968 when it was acquired by David Rockefeller. As the famous story goes, Rockefeller had formed a syndicate with the Museum of Modern Art trustees. The trustees drew numbers from a hat, Rockefeller got first pick, and he selected the Picasso.

Note – All images are copyright to Christie’s.