For those whose hearts hanker for the hammer, Hong Kong is about to be witness to a very special sale. Auctioneer suprême, Sotheby’s is all set to sell the greatest white diamond at an auction ever. The 118.28 Carat diamond will be the dazzling star of the Magnificent Jewels and Jadite sale slated for October 7, 2013, and is expected to fetch a fabulous $28-35 million. QUEK Chin Yeow, Chairman, Asia, Sotheby’s International Jewelry Division, said of the wondrous gem, “apart from its stunning size of 118.28 carats, the stone is also absolutely faultless and unbelievably beautiful. It, therefore, is a fitting offering in celebration of Sotheby’s 40th anniversary in Asia.”

The remarkable oval stone possesses excellent shine and symmetry and is the largest D-colored flawless diamond ever to make it to an auction. David Bennett, Chairman, Europe, and the Middle East Sotheby’s International Jewelry Division said, “Sotheby’s experience with diamonds of this size and quality is unparalleled. Over the course of the last 25 years, I have had the privilege of selling three perfect D color stones weighing over 100 carats, each with its own distinct personality and presence. The present oval diamond is no exception; not only is it the largest and the grandest by a significant margin, but it also is the most regal and proud of this elite group.” Discovered deep within South African mines in 2011, the magnificent type II gem is also the largest of its kind ever to be graded by the Gemological Institute of America (GIA). The ravishing rock was found 299 carats in the rough and meticulously polished and preened over months. 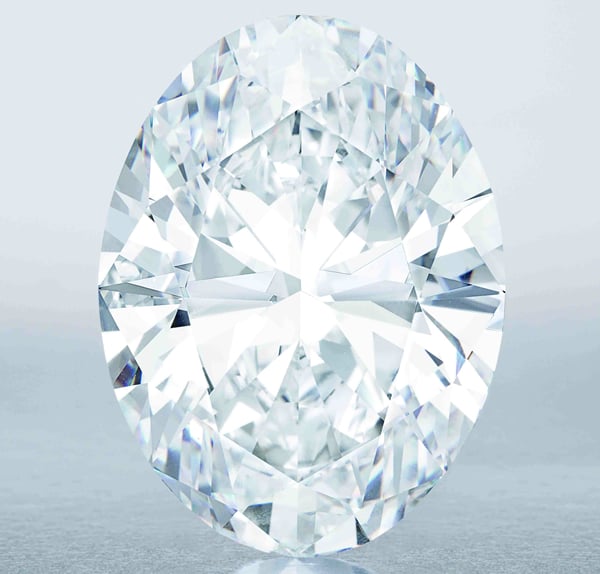 It will first appear alongside the Premier Blue diamond on September 4 for a photocall in New York. And is prepared to beat the highest recorded auction price for any white diamond held by ‘The Winston Legacy.’ The pear-shaped stone scored $26.7 million in spring this year at Christie’s in Geneva.