Last week we told you Michael Jordan’s signature Air Jordan 1s from 1985 is going under the hammer for an estimated price of $100,000 to $150,000. We dubbed them the most expensive sneakers ever and boy were we right! The shoes sold for more than three times the estimated auction price on Sunday, breaking the world auction record for sneakers, according to Sotheby’s. The basketball legend’s autographed Nike Air Jordan 1 shoes closed at $560,000. Bidders differed in age from 19 to over 50 from four continents, and 70 percent of the bidders were new to Sotheby’s. The value reached $300,000 within the final 20 minutes of the start of the sale and eventually sold at more than 3.5 times its $150,000 estimate. This takes away the title of the most expensive shoe from Nike 1972 Nike Waffle Racing Flat ‘Moon Shoe’ sold for $437,500. What adds supreme value to the sneakers is how these are the vintage versions of the most iconic shoe on the planet and they have been worn and loved by an icon, Michael Jordan in the truest sense of the term. The mid-top sneaker design was exclusive to Jordan and no other AJ1 came with red laces and the material is different, too. 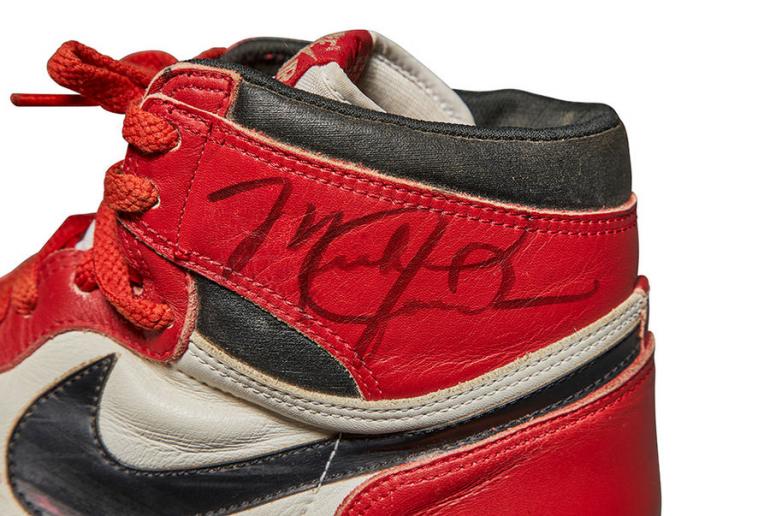 The right shoe features Jordan’s signature in permanent marker. The pair is in a size 13 (left shoe) and a 13.5 (right shoe) as is it known that Jordan wore mismatched shoes for most of his career.