Incredibly impressive, fast, and great to look at. Such are the attributes common between the sportspersons we’re about to list down and their flights. These are the sports stars who have gone beyond fast cars and tarmac and have ascended to the skies to get to the important places they have to do the important things they do. 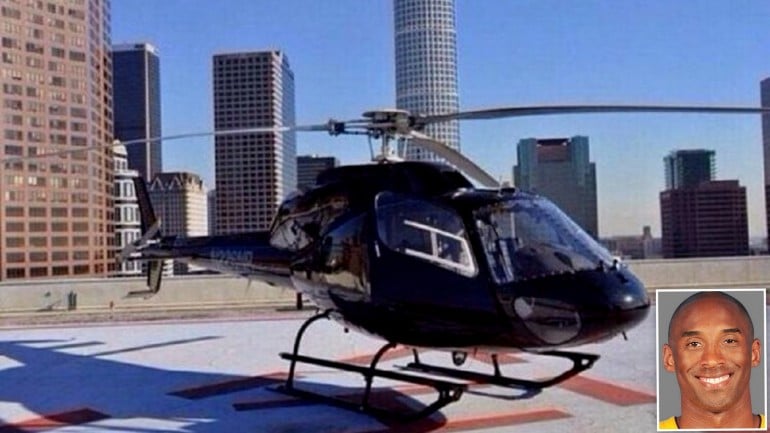 7. Kobe Bryant’s Helicopter
The notoriety of traffic in the City of Angels is fabled among the many who have failed to reach their destinations on time. So when you’re the skipper of the LA Lakers, you know better than to fall prey to the tangle of traffic that your city throws at you. Before his retirement, Kobe would travel in his private helicopter that would take off from Orange County, where he lives with his family. He’d fly to every home game to avoid the discomfort of being stuck in a car for two hours. Now that he is retired, the famed helicopter’s fate may be hanging on a thread, that is, if it hasn’t already been ‘dealt’ with.

6. David Beckham’s Bombardier Learjet 70
He has curled his way into English soccer history with his free-kicks and half-line goals, but David Beckham has also been known to be among the most stylish sportsmen to walk the earth. Why then would he settle for anything lesser than a jet to ferry him around. The former Manchester United and Real Madrid star travel in a Bombardier Learjet 70. The jet is known for its ability to take off shorter runways and great performance. The star doesn’t mind ferrying the parents of his son’s soccer mates around. 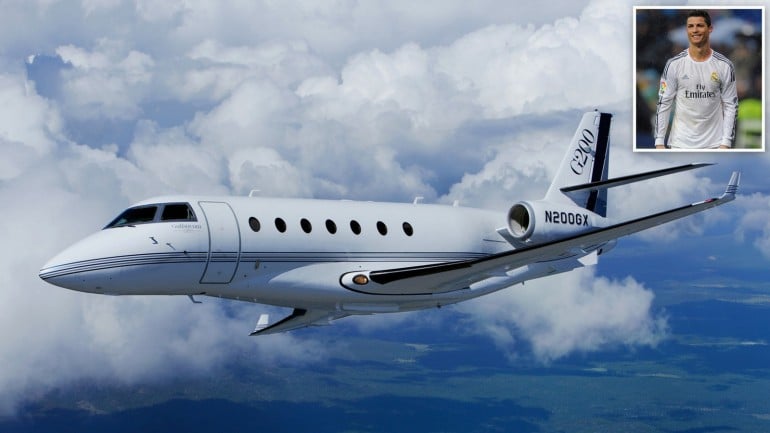 5. Cristiano Ronaldo’s Gulfstream G200
He may be touted to be the highest-earning sportsperson alive, but his tastes have always been great. This is why we aren’t surprised to see Real Madrid and Portugal’s Cristiano Ronaldo fly a privately-owned Gulfstream G200. He paid over $21 million to buy this aircraft last year and will most likely be using it to fly around his busy schedule of PR events, endorsement shoots, and of course, training. The G200 seats between eight to ten passengers and features a special bathroom for passengers in addition to wardrobes, internet access, a telephone, fax, microwave, electric oven, refrigerator, and an elaborate entertainment system. With the flight’s cruise speed of 540 mph, you can be assured that CR7 seldom misses his big appointments. 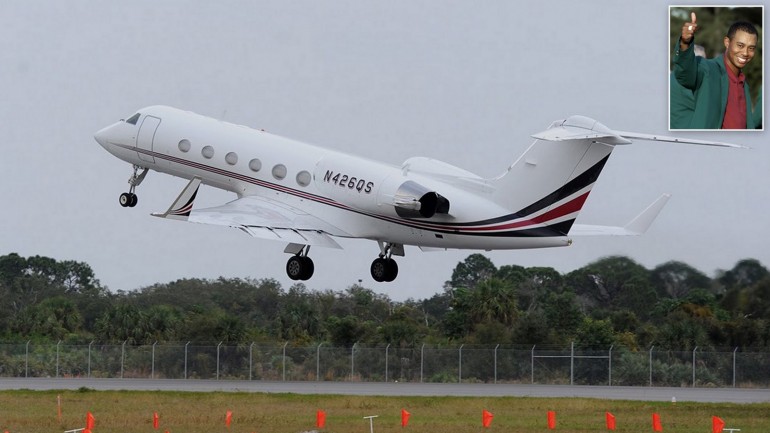 4. Tiger Woods’ Gulfstream G550
The golfing maestro has his ‘drives’ in place, but when it comes to transport, you wouldn’t expect one of the highest-paid sportspersons to move about in something as puny as a Bentley or Maybach. Tiger’s private jet is a Gulfstream G550. The jet isn’t just for a few domestic flights but offers an intercontinental-range ideal for a touring golfer. If only we could have something a little more aerial for the greens as well. 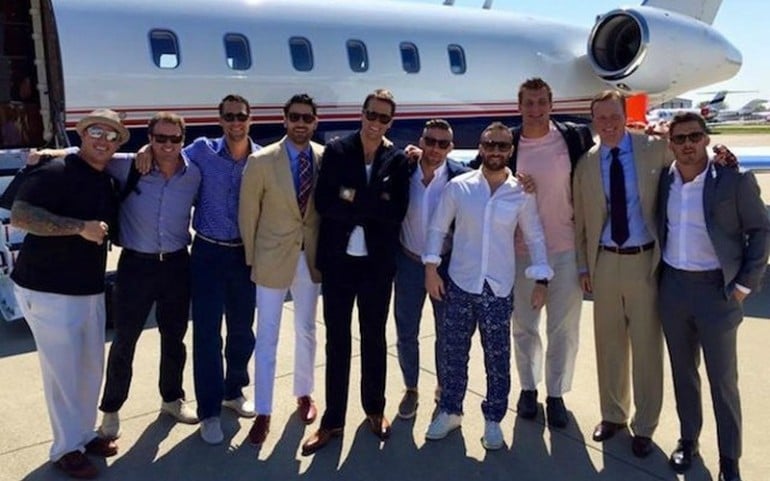 3. Tom Brady’s Gulfstream G550
Brady isn’t just any QB. He’s set a standard for himself and doesn’t seem to have any hurry in budging away from it. This could be why he ferries himself around in the same model aircraft owned by Tiger Woods. We draw as a similarity between Brady, and his ride is the incredible range and power they both have to offer. 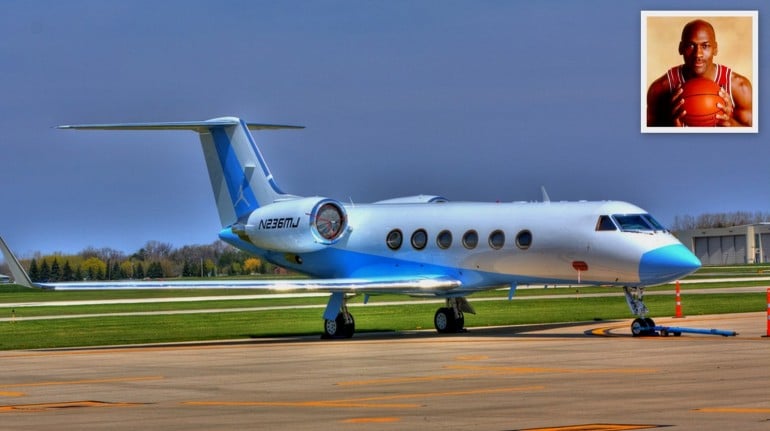 2. Michael Jordan’s Gulfstream G450
Basketball legend Michael Jordan comes second in our countdown because of his swag and choice of ride. Like most things associated with Jordan, the plane, too, had an Air Jordan logo unit on its body with a visual representation of Michael’s famous dunks. What is the similarity between them famous sports shoes and the plane, you may ask? Look closer, and it shall be revealed to you. The blue and white aircraft have been spotted on numerous occasions. Legends have it that the pilots also gifted Michael with a custom Gulfstream-engraved putter. 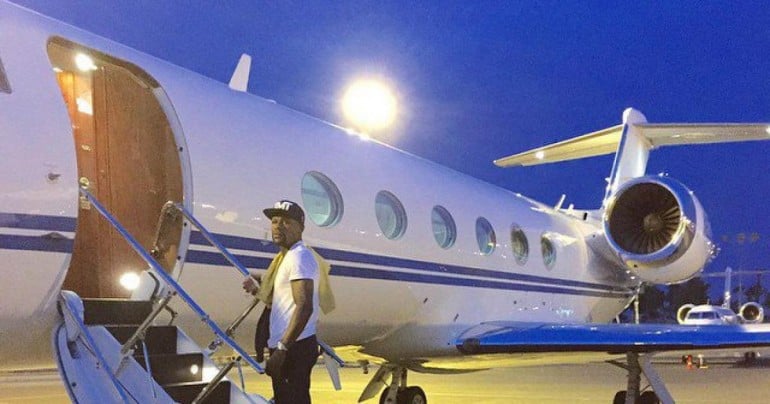 1. Floyd Mayweather’s Gulfstream G550
The former ‘highest-paid sportsperson’ in the world and celebrated retired boxer, Floyd Mayweather, had to make this list. The man retired with 49 wins from 49 fights and has every right to brag about his accolades from the skies. His Gulfstream G550, which he has christened as AirMayweather, was seen on his Instagram profile, where he posted delectable images of a rather comfortable and snug cabin. We have a hunch that this would be the most utilized private carrier from everyone we know on this list. The flight is rather elaborate and can seat 2 pilots, 2 attendants, and up to 19 passengers.