Indian billionaire Mukesh Ambani is one of the world’s wealthiest men and also the most euphoric. With the arrival of twin grandkids, and the promotion of his only daughter, Isha Ambani, to motherhood, one of Asia’s richest family is nothing short of ecstatic. How does a man worth $92.5 billion who lives in a $4.6 billion 27-story skyscraper home celebrate this momentous occasion? By showering the newest, tiny additions with oodles of love and luxury to match.

Baby girl Aadiya and baby boy Krishna will have nurseries at both Isha and Anand Piramal’s residence in the posh sea-facing locale Worli, as well as the Ambani megatower Antilia. World-renowned Perkins and Will designed their nurseries.
As expected from the uncrowned kings and queens of the Indian business world, their offspring will be nurtured in the best money can buy. The hi-tech nurseries will come equipped with automated rooftops that will open up so the little ones can soak in a healthy dose of Vitamin D. The cutesy room is flanked by custom-made furniture from Loro Piana, Hermes, and Dior. Still, the highlight remains the exceptional feature of rotating beds. The tiny tot’s wardrobe may house the teeniest clothes but only those from the children’s line of the biggest names like Dolce & Gabbana, Gucci, and Loro Piana.
No doubt the kids will travel in style (the maternal grandparents own a six-floor garage housing 168 cars, like Bentley Bentayga, Mercedes-Benz S600 Guard, Lamborghini Urus, Maserati Levante, two Rolls-Royce Phantoms and more), but the twins will not be traveling in the plush backseats of any of these luxury sedans. Instead, they will be making use of special BMW designed seats.
In addition to already having the best of things served on a diamond-studded platter, the twins will receive the best care. Isha Ambani’s twins were born a few months ago at Cedars-Sinai Medical Center in Los Angeles, California, under the supervision of Dr. Gibson, one of America’s leading pediatricians. An excellent team of doctors and nurses from Mumbai and Los Angeles were on the flight back home, Dr. Gibson included, ensuring the twins’ first flight was one laced with utmost comfort.
They also returned with an entourage of not one or two but eight specially trained American nannies and nurses for the daily care and comfort of the twins. As expected, the group did travel on a private plane, not in the Ambani Airbus A319, but on a special Qatar flight sent by the Emir of Qatar himself for his dear friend’s family and its newest members. 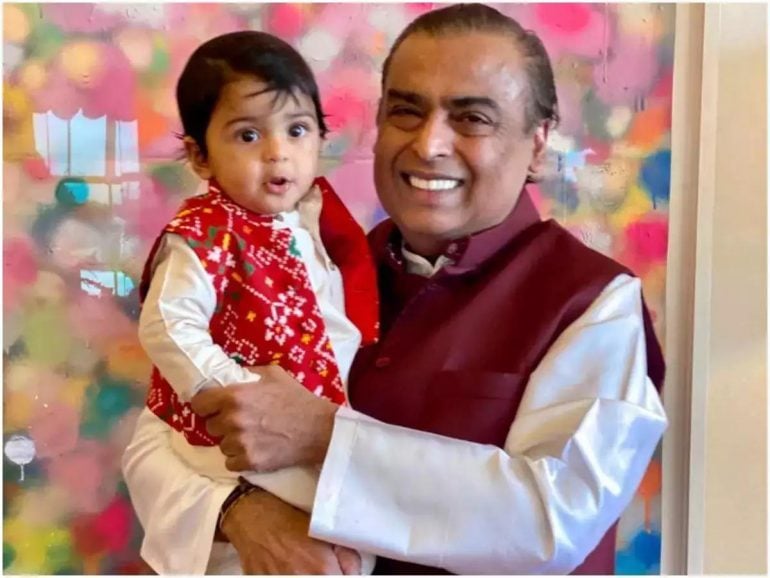 The billionaire will donate 300 kgs of gold –
For the welcome of the twins, the Reliance heiress’s residence, Karuna Sindhu, a $61.2 million diamond-themed Mumbai mansion originally called Gulita, witnessed the arrival of high priests from renowned temples across the country. Part of the extravagant religious ceremony will be a generous donation of 300 Kgs of gold (662 pounds) worth a whopping $17 million. Guest at the ceremonies will revel in world-class delicacies as caterers are flown in from various corners of the planet. Immense wealth is combined with noble volition as the affluent Ambani’s mark the arrival of the twins with the opening of five orphanages.

Renowned Chicago based firm designed the nurseries –
The global Chicago-based design firm was founded in 1935 by Lawrence Perkins and Philip Will. Perkins and Will are the brainchild behind Antilia and the obvious choice to design Aadiya and Krishna’s little haven as well. The firm attracted national attention in 1940 with the Crow Island School in Winnetka, Illinois, and has grown manifold in the coming years with the iconic Chase tower and Boeing International Headquarters in Chicago and Aaniin Community Centre, Markham, Ontario, Canada.


Ivy League passout, Reliance heiress, and new mum Isha Ambani-
2022 has been a memorable year for the Stanford University graduate and daughter of Asia’s richest man. The 31-year-old was appointed as Reliance’s group retail business leader and is worth $100 million. SCMP stated Isha Ambani is spearheading the first in-house premium fashion and lifestyle store Azorte. It is touted to give tough competition to the likes of Mango and Zara, targeting millennials and Gen Z buyers. Her professional life witnessed a massive move, and on the personal front, she embraced motherhood and welcomed twins Aadiya and Krishna on November 19. The director at Reliance Jio Infocomm and Reliance Retails herself is a twin. Her brother Akash Ambani is the oldest of Mukesh and Nita Ambani’s three children.
Tags from the story
Antilia, Billionaires, Mumbai

Love to hate them, but these Christmas songs make a lot of money for their…