There is more to Donald Trump than the most talked-about presidency, his Trump International Hotel D.C. and The Trump Towers. Off late Trumps, tribulations have been widely spoken about, and it’s time we changed some tunes. He is still the man most love to hate and do so ardently. Even after all this time, many don’t know much about the man who rocked the world of politics, real estate and still does. For instance, not many know that Donald Trump owned the iconic New York City landmarks such as the Central Park ice rinks or even the Plaza hotel. Not many know of his obsession with diet coke, his penchant for Italian suits or foreign luxury brands. Listed below are some products that are fancied by the most disliked man on the planet. While some are expensive beyond comprehension, some are too cheap to mention! Read on to learn a little more about The Donald:

He loves his Hermes ties and Brioni suits
The man says what he thinks and even wears his opinions. In his book, Think Like a Billionaire, Trump states that more refined things in life are foreign-made. The hedonistic man stated, “Billionaires are not defined simply by the size of their holdings but also by the quality of their stuff.” It’s Italian-made Brioni for the man who is worth $2.5 billion today. It’s Brioni everything for him right from suits, shirts, and ties too. There was a time when Donald Trump wore suits only by suit-maker Marcraft Clothes when the brand ruled the roost with $1,400 Trump-branded suits made famous in the “Apprentice” T.V. show. Unfortunately, today Marcraft Clothes owes Trump a staggering $644,000 in rent for occupying the entire 18th floor in The Trump Tower NYC. 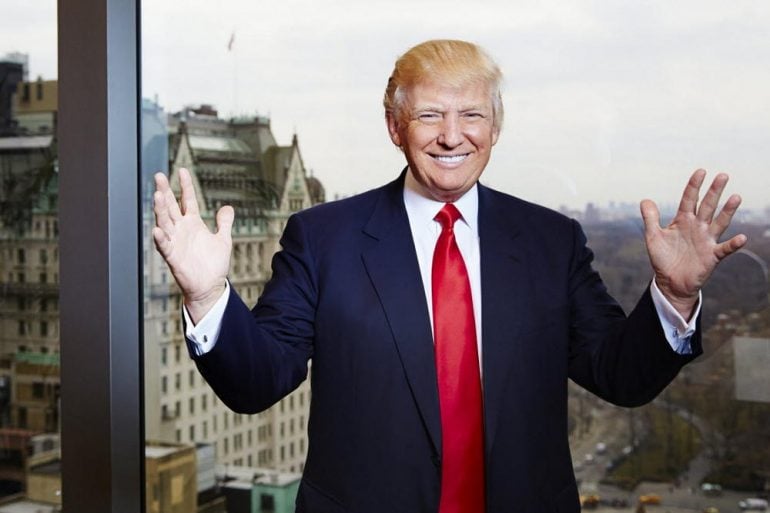 Trump declared his love for Brioni, as he shared, “I wear Brioni suits, which I buy off the rack. Some people think it’s best to have custom-tailored clothing. I don’t recommend it unless you have an oddly shaped body and unless you have a great deal of time.” For those unaware, Brioni suits start from $7000. Coming to ties, Trump favors the Brioni brand yet again but also the exclusive and fine Hermès ties. He once said, “Brioni and Hermès make the best ties. And I must say, as I keep mentioning Brioni, that they graciously supply me with my clothing for The Apprentice.” The luxury brand Hermès is known for its fine quality products, and the ties alone start at $250, making them quite an expensive purchase. 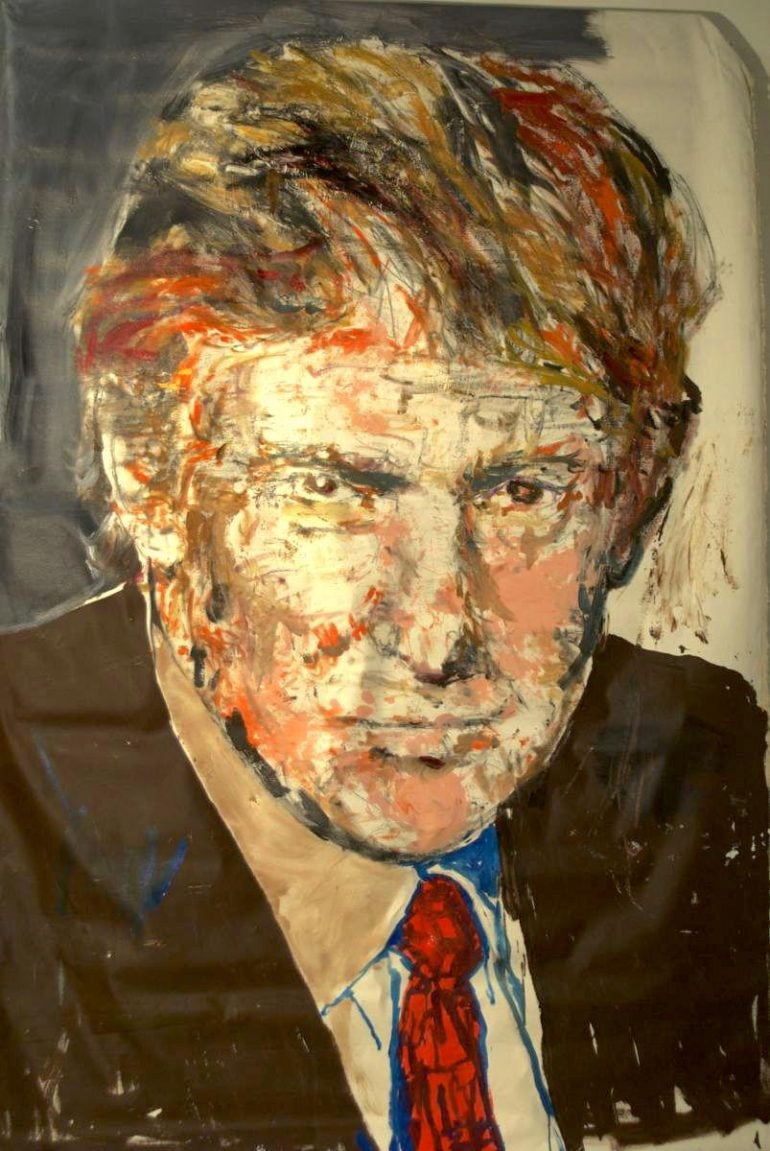 Trump loves buying portraits of himself
There is no doubt that Trump has a great deal of love and respect for himself, no matter what the world thinks. So when an avant-garde portrait of Donald Trump went up for sale at a recent art auction in East Hampton, Trump ensured artist William Quigley’s work got in the right hands. The 9-foot oil painting starred Donald Trump wearing a dark suit (a Brioni for sure) and blue tie. Unable to attend himself, he asked his friend Stewart Rahr to place a $100,000 bid on his behalf, reports BlackBook. Proceeds from the sale benefit Guild Hall, Center for the Visual and Performing Arts in East Hampton. 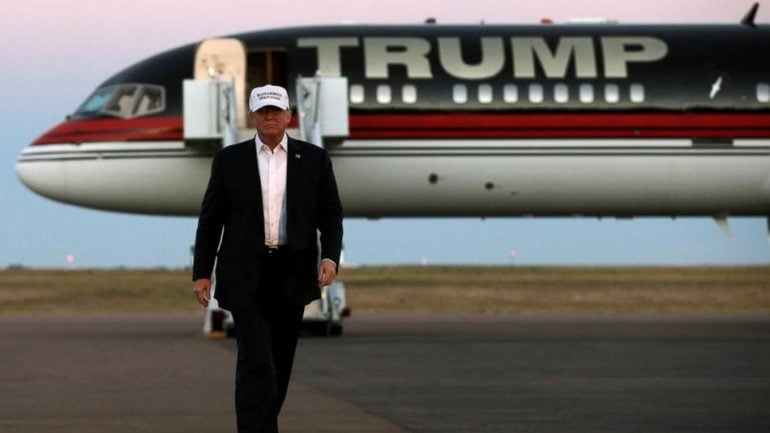 The majestic Trump Force One
Not many can boast a private jet, but Donald Trump can, and that too is a $100 millioncustom-built private jet. He may have stumbled off the Forbes list of the 400 richest Americans, but the man has a knack for making money and continues to enjoy the luxe aspects of life. 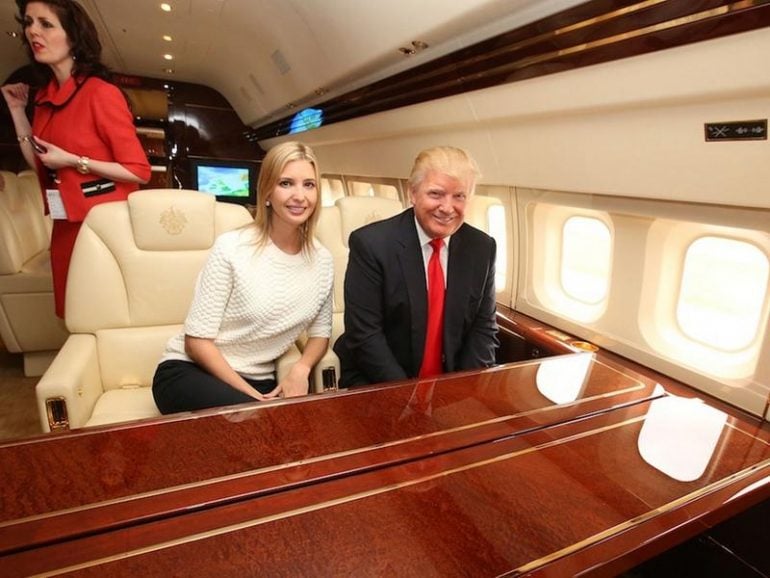 After buying one of the most luxurious private jets globally from Microsoft co-founder Paul Allen in 2011, he gave the beast the ‘Trump treatment’! Nicknamed ‘Trump Force One,’ the jet comes loaded with modern luxuries, including modern plush cabins, a 57-inch television, custom mahogany coffee tables, and true Trump style. It can be called a bit OTT as bathroom fixtures, light switches, and seatbelt buckles come plated in 24-carat gold. 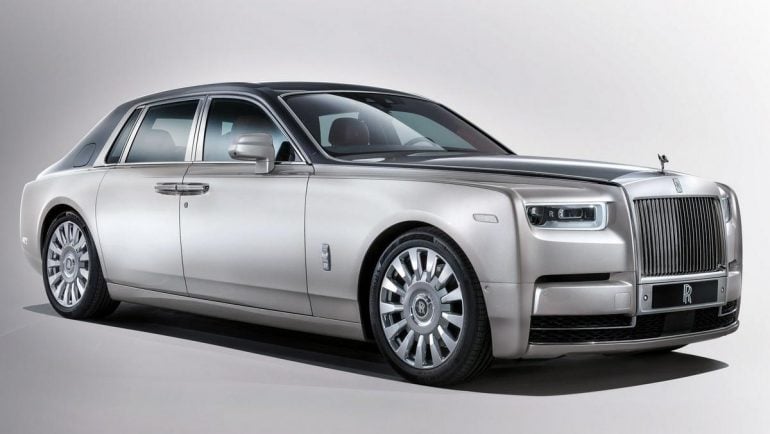 He owns a fleet of luxury cars
After deluxe suits, mega mansions, and sprawling private jets, it’s time to talk about the superb collection of cars. His envious collection of luxury cars will blow a car lover’s mind as it includes a specially built Rolls-Royce Silver Cloud in the 1956 style. No man is rich till he has a Rolls Royce, and Trump owns one that could be an original worth up to $69,000. There is also a stunning 1993 Cadillac Allante perched in one of Trump’s garages somewhere. Apparently, in good condition, it could still be worth $25,300 today. The most opulent car in his collection has to be the 2003 Mercedes Benz SLR McLaren costing up to $496,000. In recent years he has been spotted in a Mercedes-Benz S600, which starts at $400,000 and $407,000 worth Rolls-Royce Phantom. His most outrageous set of wheels come in the form of a gold-covered Orange County Choppers motorcycle emblazoned with a Trump logo on the gearbox cover, and the Trump coat of arms on the engine

If the millions spent on material objects in Trump’s massive kitty is making your head spin, then let’s check in with the few things that make him more like us: 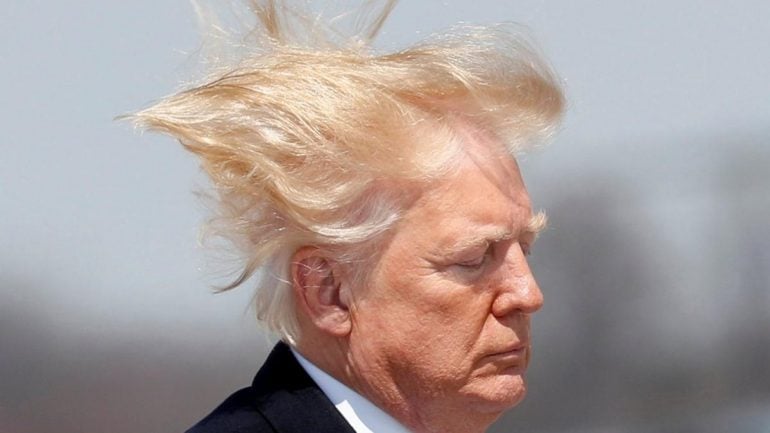 Trump swears by Head and Shoulders shampoo
Donald Trump’s hair is as widely discussed a topic as his political agenda. While the color kept changing over the years from dark to orange to gold and now nearly silver, the shampoo remained constant. Explaining his routine, he said: ‘Okay, what I do is wash it with Head and Shoulders. I don’t dry it, though. I let it dry by itself. It takes about an hour. Do I comb it forward? No, I don’t comb it forward. It’s sort of a little bit forward and back. I’ve combed it the same way for years. Same thing, every time.” 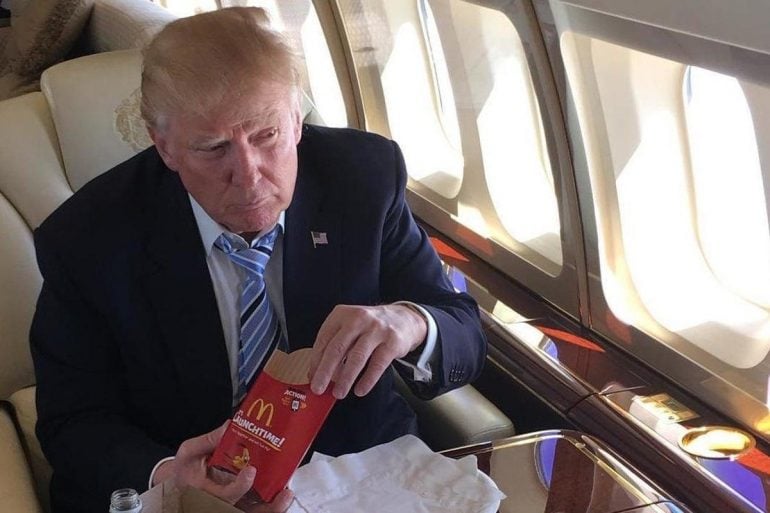 Trump is an insatiable McDonalds fan
Trump loves to treat himself to a Mcdonald’s breakfast or any other meal of the day. According to the Washington Post, his order usually consists of “two Big Macs, two Filet-O-Fish, and a chocolate malted.” For breakfast, he usually had his staff gets him some Egg McMuffins. It’s a field of calorie intake primarily for someone at 71 years of age. A patterned fast-food diet could jeopardize his health, but Trump couldn’t care less though sometimes he ditches the bread. Without the bun, this meal still contains at least 1,880 calories based on nutrition information available on the McDonald’s website. According to the U.S. Dietary Guideline, a typical day in totality should include a 2,000-calorie count. 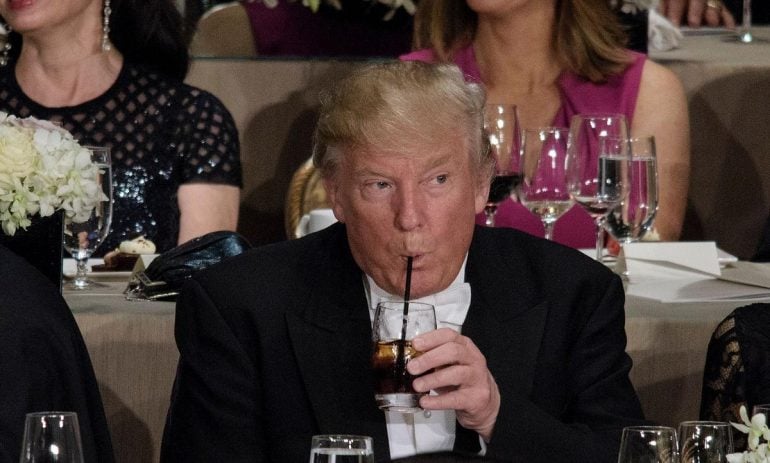 Trump’s love affair with Diet Coke
The man’s fixation with diet coke is legendary! At work, Trump, a known soda lover, reportedly had a Diet Coke button installed on the Resolute Desk. When pressed, a staffer would be summoned to provide the drink to the thirsty commander in chief. A typical day saw the man consume at least 12 cans of Diet Coke. At his iconic Trump International Hotel, the staff has a 7 step instruction manual ready to learn the process of pouring him his beloved Diet Coke. Whatever his preference, the server is prepared with a perfected tray with chilled bottles and highball glasses. The beverage is ‘always’ opened in front of Trump and placed at the right-hand side.